Schools Come Together To Feed Families During Arizona Teacher Strike 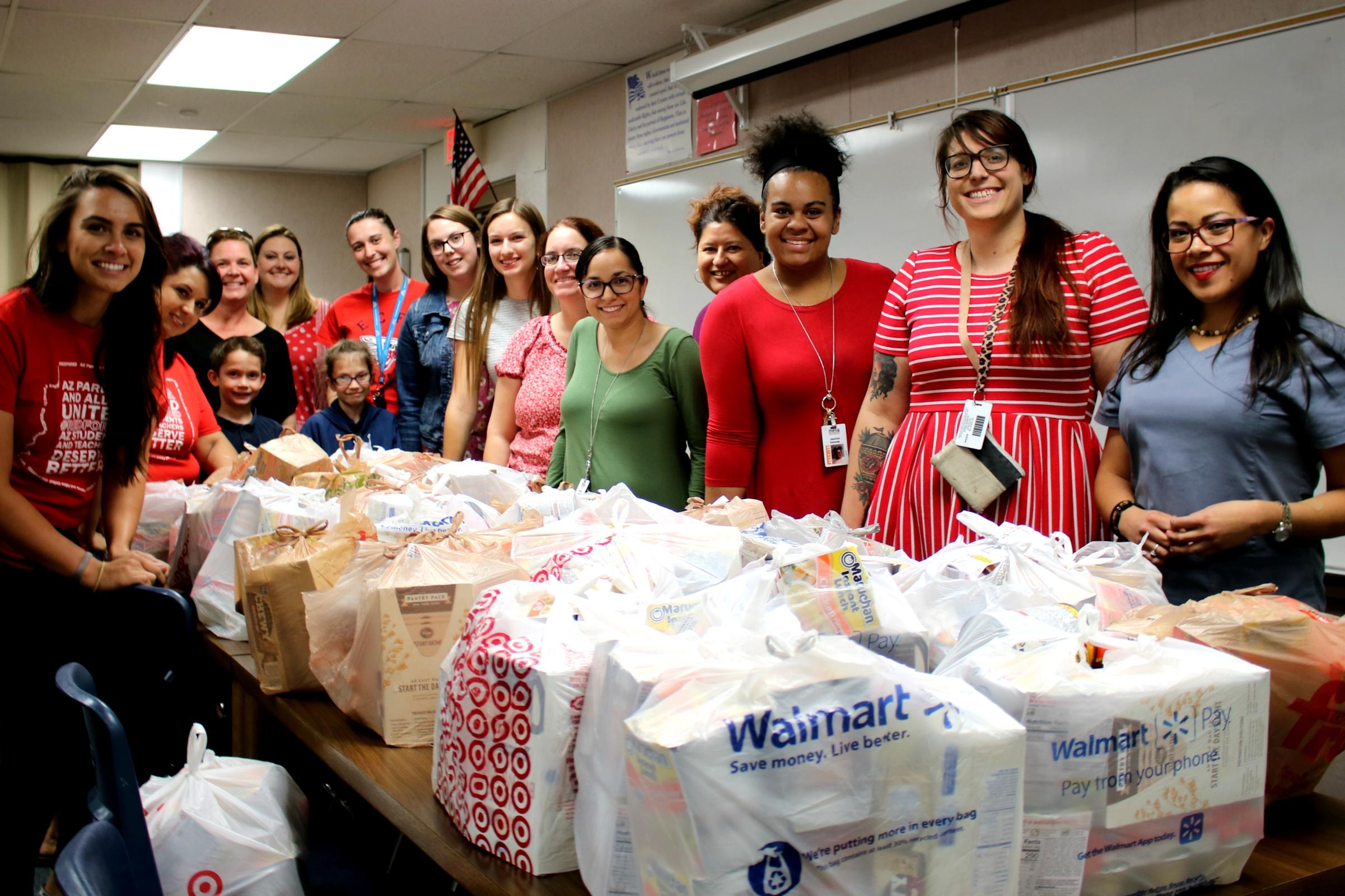 Claire Caulfield/KJZZ
Educators packing up bags of food at Eisenhower Center for Innovation.

Teachers at some Arizona schools are putting together meals to make sure their students don’t go hungry while they are on strike.

More than 600,000 Arizona students rely on free lunch programs, according to the Arizona Food Bank Association, and many educators, especially those at Title I schools where majority of the students qualify for free or reduced-price breakfast and lunches, worried about their students.

Rodi Vehr, a first-grade teacher at Longview Elementary School in Phoenix, has her shopping list memorized.

“A loaf of bread, a jar of peanut butter, a jar of jelly, a six-pack of applesauce, a box of cereal and then six containers of that shelf stable milk,” she said. “Oh! And a box of saltine crackers.”

That’s because she’s been to the grocery store almost every night this week to purchase non-perishable food in bulk. Then, every morning, she got to school early to pack the food into bags.

While Vehr was making plans for the strike, she said she realized 89 percent of her school’s students qualify for free or reduced price lunches and could go hungry without those free meals. She started posting to Facebook asking for cash and food donations and raised over $1,000.

Educators all over the state were active on Facebook, Twitter and Instagram asking for food and providing resources for parents looking for free meals and childcare.

Victoria Griffith, an English-language development teacher for kindergarteners at Eisenhower Center for Innovation, knew she would be heartbroken if just one of her students missed a meal due to the walkout.

Many schools partnered with grocery stores. Griffith called up Fry’s grocery and asked for discounts. Eisenhower, a Title I school, already had a food pantry, so she put a plan in place with a local food bank to replenish the school’s supply during and after the strike.

“Our ultimate goal is to feed families,” she said.

But students aren’t the only ones at risk in a teacher strike. Thousand of Arizona schools and school districts are staffed by hourly employees. If school is canceled, they won’t receive a paycheck.

“Custodians, bus drivers, crossing guards — but it's also your front office staff and your teaching aids and your nurses assistants,” said Ben Smith, Board President for Mesa Public Schools.

“Our ultimate goal is to feed families.”
— Victoria Griffith

Smith said majority of Mesa School District’s 15,000 employees will go without a paycheck during the strike.

“So Meredith Hay really stepped up,” he said, referring to a teacher at Highland Arts Elementary School in Mesa who started collecting grocery and gas cards for support staff.

And it’s not just school employees who are preparing for the strike.

On Monday, fourth-grade teacher Marnee Burrus was surprised when two families showed up to Lowell Elementary with food for her.

“There were tamales and you know those like huge ice cream buckets but it was full of menudo!” Burrus said.

One mom told Burrus she was concerned her child’s teacher wasn’t getting paid enough, and another said she was bringing in the food so if Burrus was out marching at the capitol all day she wouldn't have to worry about coming home and cooking a meal.

“Here in the midst of everything going on, here are people in my community worried about me and how I’m going to make it through,” she said.

Keri Chavarria, a fifth-grade teacher at Park Meadows Elementary School in Phoenix, donated $165 of her own money to the effort that filled over 400 food bags for underprivileged students.

High school students at Mountain View High School in Mesa worked alongside teachers to put together meal boxes that could feed families for three to four days.

“My husband is a pharmacist, which is a little bit different than my career, and he obviously sees how much work we put into this and how many hours of sleep we’re not getting,” Heather Gookin said.

She’s a fourth grade teacher at Zaharis Elementary and said she’ll be worried about two of her students in particular.

“This decision to walk out is causing enormous amounts of sleepless nights – I have acne like I’m 13 again!”

And at Eisenhower, principal Robby Meldua said he knew that close community ties made it possible for teacher to assemble 80 food bags.

“Teachers know their students incredibly well at Eisenhower and they immediately jumped on and made a list of kids who they thought of,” he said. “[These students] have not necessarily asked for that food but we know there's a possibility of food scarcity in the homes.”

If the teacher strike in Arizona mirrors the stikes in Oklahoma and West Virginia earlier this year, schools could be closed for days. Many teachers said they’ll keep making social media pleas and grocery runs to ensure that families who need help receive it.

“Teachers are doing this for the kids,” said first-grade teacher Rodi Vehr while wiping away tears. “That’s why we’ll make bags and we’ll donate money and we'll donate our time to do that because it's not for us, it's because we want something better for our kids.”