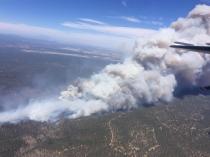 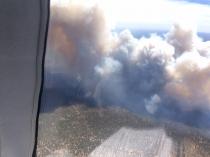 inciweb.nwcg.gov
Aerial view of the Tinder Fire on April 29. 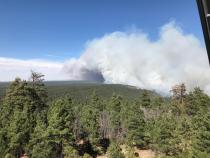 inciweb.nwcg.gov
Smoke from the Tinder Fire.

The Tinder Fire north of Payson is now burning 8,623 acres and shows no signs of slowing down.

Fire officials said the blaze, which is zero percent contained, is being fueled by high winds and dry timber in the Coconino National Forest.

A temporary shelter for displaced residents opened at the Twin Arrows Casino in Flagstaff and the Navajo County fairgrounds accepted horses and other large animals.

The American Red Cross relocated their shelter in Winslow on Sunday night due to poor air quality and any Winslow residents with preexisting health conditions are advised to avoid going outdoors due to the negative health effects of wildfire smoke inhalation.

Fire officials don’t yet know what sparked the fire on Friday, although they suspect it was man made. Over 500 emergency personnel deployed, including seven hot shot crews.

On Sunday, firefighting aircraft had to temporarily stop flying due to a consumer drone in the area, leading officials to remind the public that flying a drone near a wildfire is illegal.

Officials predict the fire will continue to move northeast, but expect to see a reduction once it reaches pinyon/juniper vegetation.