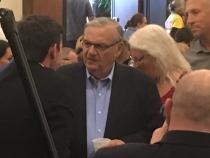 In a decision released Monday, the Ninth Circuit Court of Appeals found Maricopa County can be held liable for the "racially discriminatory policing policies" of former sheriff Joe Arpaio.

Arpaio has been named in a number of lawsuits and class action settlements through the years. The United States Government sued Arpaio for civil rights violations and the courts found that “under Arpaio’s leadership, the Maricopa County Sheriff’s Officer routinely targeted Latino drivers and passengers for pretextual traffic stops aimed at detecting violations of federal immigration law.”

Maricopa County was named as defendant in those cases, but the county and current Sheriff Paul Penzone argued any discriminatory policies were just those of Arpaio’s office, not the county.

However, the court found that, under Arizona’s constitution, “with respect to law enforcement matters, sheriffs in Arizona act as final policymakers for their respective counties.”