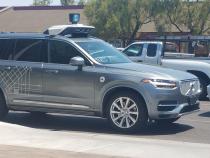 Sky Schaudt/KJZZ
An Uber self-driving car in Tempe in 2017.

Operations had been suspended since March after one of the company's self-driving vehicles hit and killed a 49-year-old woman in Tempe.

“We’re committed to self-driving technology, and we look forward to returning to public roads in the near future. In the meantime, we remain focused on our top-to-bottom safety review, having brought on former NTSB Chair Christopher Hart to advise us on our overall safety culture,” an Uber spokesperson said in an email.

About 300 employees worked on the Arizona branch of the project. Uber will provide “outplacement services” to try and help those people find other jobs.

Uber said it is not halting its self-driving program in other cities and it will be "doubling down" efforts in Pittsburgh and San Francisco engineering hubs.

Arizona was the primary location for operations testing.

NPR reported Uber did not seek to renew its permit in March to test autonomous cars in California.

The company will continue to maintain regular ride-sharing operations and a support center that employs more than 500 people.