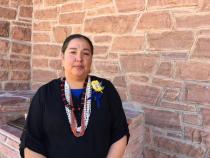 At least 2,500 Native-American women have been murdered or they've gone missing in North America since 1900. There are likely many more, but many Native women go unreported. One researcher is trying to change that.

It's not mandatory for law enforcement to add missing people to a federal database, and some officers haven't gone to the effort of even listing a person's race on the police report. So Annita Lucchesi has made it her mission to create her own database of murdered and missing Native women.

"I'm a survivor of violence," Lucchesi said. "I was almost a woman on this list. If something happened to me I'd want to be honored and remembered."

Lucchesi, who is a Southern Cheyenne descendent, has gathered her data from public information requests, newspapers, social media and other sources. And she's been able to detect some trends in her research, like the number of girls listed in foster care when they were assaulted or went missing.

"We know that there's a relationship between foster care and trafficking," Lucchesi said. "But the database is able to prove that 65 percent of the girls in foster care when they went missing or murdered were actually victims of trafficking or sexual assault."

On the Navajo Nation there are more than a hundred missing or murdered women in Lucchesi's database. Council Delegate Amber Kanazbah Crotty has worked to pass stronger laws against trafficking and violence against women. She's also having tough conversations at home with her daughters.

"We know they're being preyed upon they're a target," Crotty said. "I know in the research I'm doing it's 12-16 year old Native girls. Not only is it my daughters but it's their friends, our relatives and our community, so we have to have these conversations."

Crotty said talking about it, even though it's taboo, gives young women another layer of armor.