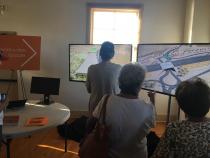 The South Mountain Freeway project is underway and the latest highway design plan has left some small community members angry, some of whom came to a public meeting last night meant to address concerns.

The South Mountain Freeway cuts down from the Interstate 10 to connect to the Loop 202.

The plan was to have about a dozen interchanges at main roadways like Southern Avenue and 24th St.

Now, the Arizona Department of Transportation is looking at plans for a new $10 million interchange to let out right at the Vee Quiva Casino on Gila River Indian Reservation.

“This would provide direct access to that casino and take traffic off the local roadway network and provide a more efficient way for them to get to the casino,” said Dustin Krugel, ADOT spokesman.

Traffic would exit onto the rural area of Dusty Lane Community, bounded by South Mountain and the new freeway.

Dozens of locals came to the event in Laveen, including teacher Anne Rogers who sees the interchange as a huge disruption and safety hazard.

Rogers started a group called "Save DLC" to help band the small community together to express concerns.

Rogers said she was already in communication with ADOT about a sound wall when she learned of the new interchange.

"We want them to acknowledge we are a distinct neighborhood," she said. "We felt blindsided."

Krugel said the point of the public meeting and extending the comment period is to get that kind of input.

"At this point ADOT is committed to studying the interchange and deciding if it's desired or not," Krugel said. "Receiving that feedback is going to help our decision makers determine whether we need to build or not build the interchange."

Mary Fremont lives near where the proposed interchange would be and came to the meeting. She said she understands the casino would affect traffic, but thinks the interchange location should be moved.

"We don't feel that, as a convenience to the Indians, we should be subjected to [the interchange]" Fremont said. "We're not opposed to them having access, just not there."

According to the ADOT website, "based on traffic projections obtained from the Maricopa Association of Governments for the year 2040, approximately 2,000 vehicles per day would use each of the on- and off-ramps at Ivanhoe Street."

The public comment period has been extended until July 19.