2 Bears In Arizona Euthanized In A Week 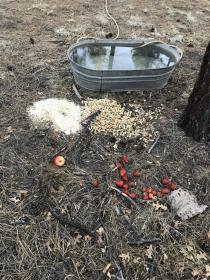 Arizona Game and Fish Department
Officers found this cache of food and water while looking for a habituated bear near Pinetop on Sunday.

Two bears have been euthanized this week after Arizona officials say they became a public safety threat. One mother bear left two cubs behind.

Arizona Game and Fish Department wildlife officers tried to relocate both of the bears. But both returned to populated areas — one in Anthem, the other in Pinetop-Lakeside.

Wildlife managers say during extreme drought conditions bears are looking for food and water and the answer is not for people to feed them.

"They're not stupid and they will go back for it," said Stan Cunningham, a wildlife biologist who studies bears at Arizona State University Polytechnic. "And then that bear has associated humans with food and eventually will take food away from humans or maybe decide that humans are food."

The agency's euthanization policy stems from a 1996 incident when a bear that had been relocated outside Tucson returned to a campground and mauled a teenage girl.

Authorities learned the second bear had cubs after she was euthanized. The cubs now have a new home at Bearizona in Williams.