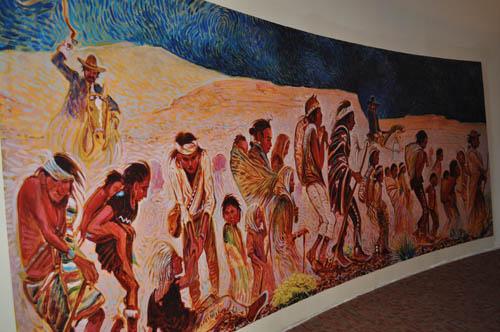 Bosque Redondo Memorial and Shonto Begay
Navajo Artist Shonto Begay says, “I could feel and hear the cries of the people the trail the heat the cold. I had to be deep deep inside that to try to bring out the echoes of the cries on the trail.”

June 1, 2018, marks the 150th anniversary of the signing of the Navajo Treaty, which returned the tribe to their original land following a period known as the Long Walk. The treaty set the Navajo apart from other tribes, who were permanently removed from their ancestral territory.

In 1864, the U.S. Army forced more than 10,000 Navajo and Apache to walk 400 miles from their reservation in northeastern Arizona to the edge of the Pecos River in eastern New Mexico. Thousands died.

These days, so many Navajos like musician Clarence Clearwater have moved off the reservation for work.

Clearwater performs on the Grand Canyon Railway — the lone Indian among dozens of cowboys and train robbers entertaining tourists.

“I always tell people I’m there to temper the cowboys,” Clearwater said. “I’m there to give people the knowledge that there was more of the West than just cowboys.”

Clearwater retraced his great-great-great-grandfather’s footsteps 50 years ago for the Long Walk’s 100th anniversary. Along the way he learned a song about going home.

“When we were on that Long Walk that was a song that I heard all the way over there and back,” Clearwater said. “It was very powerful.” 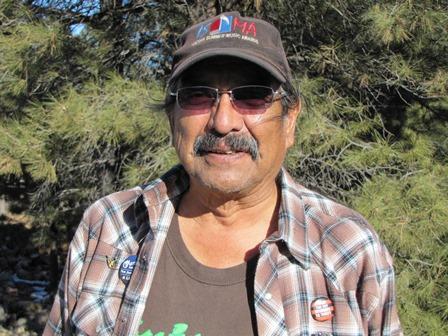 Clearwater said the stories he heard as he walked are haunting: A Navajo family gave away their baby to a non-Native family, so the infant would have a better chance at survival. Many drowned crossing the Rio Grande.

“Some of the older people were talking about how elders like themselves had just been left out in the desert, left where they fell,” Clearwater said. “In cases of them trying to rejoin and soldiers didn’t want them, they shot them and killed them.”

“The consequences of The Long Walk we still live with today,” said Jennifer Denetdale, a historian and a University of New Mexico professor. She said severe poverty, addiction, suicide, crime on the reservation all have their roots in The Long Walk. And she said the federal government has still not fulfilled its 1868 treaty promises to the tribes.

“So I think it’s really been a struggle to believe in our own ability to create on the Navajo Nation institutions and structures that will bring about prosperity and a way to live well,” Denetdale said.

They walked to Fort Sumner, which was essentially a prison camp where Colonel Kit Carson attempted to “tame the savages.” Today a giant mural there commemorates The Long Walk. On one panel are swirls of red and orange — the desert heat, a long line of families, a child on his mother’s back, a fallen elder, his son helping him up, behind them a soldier on horseback cracks a whip. Navajo artist Shonto Begay painted the mural.

“I could feel and hear the cries of the people, the trail, the heat, the cold,” Begay said. “Just to walk the grounds a lump in your throat like something bursting forth and I felt all the anguish of the ancestors.”

The Navajo culture is intrinsically tied to the Earth. Begay said many live or frequently return to the place where their umbilical cords are buried.

The Long Walk was among many attempts by the federal government to wipe out Native culture. Others include sending Native children to boarding schools to eradicate their traditions. Begay said he was 5 years old, out herding sheep, when a man driving a flatbed truck gave him candy and hauled him away. 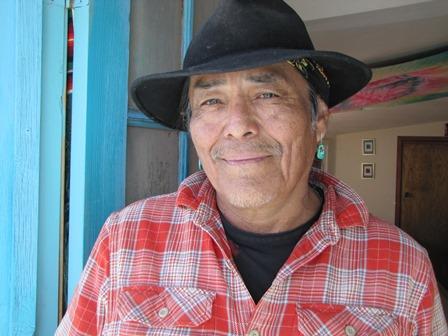 Laurel Morales/KJZZ
Navajo artist Shonto Begay says, "the Navajo have been beaten down to the point where a lot of self-hatred is evident." But he sees that changing in the youth. There is a resurgence of tradition.

"Shonto" means light dancing on water. It is also the name of his town, his home where he remains connected today.

He wants his children and grandchildren to know their ancestors’ suffering and determination meant something.

“’Hey, your forefathers survived,’” he tells them. “’Make something of it. Honor it.’”