As U.S. Refugee Resettlements Drop, Infrastructure To Help Them Crumples 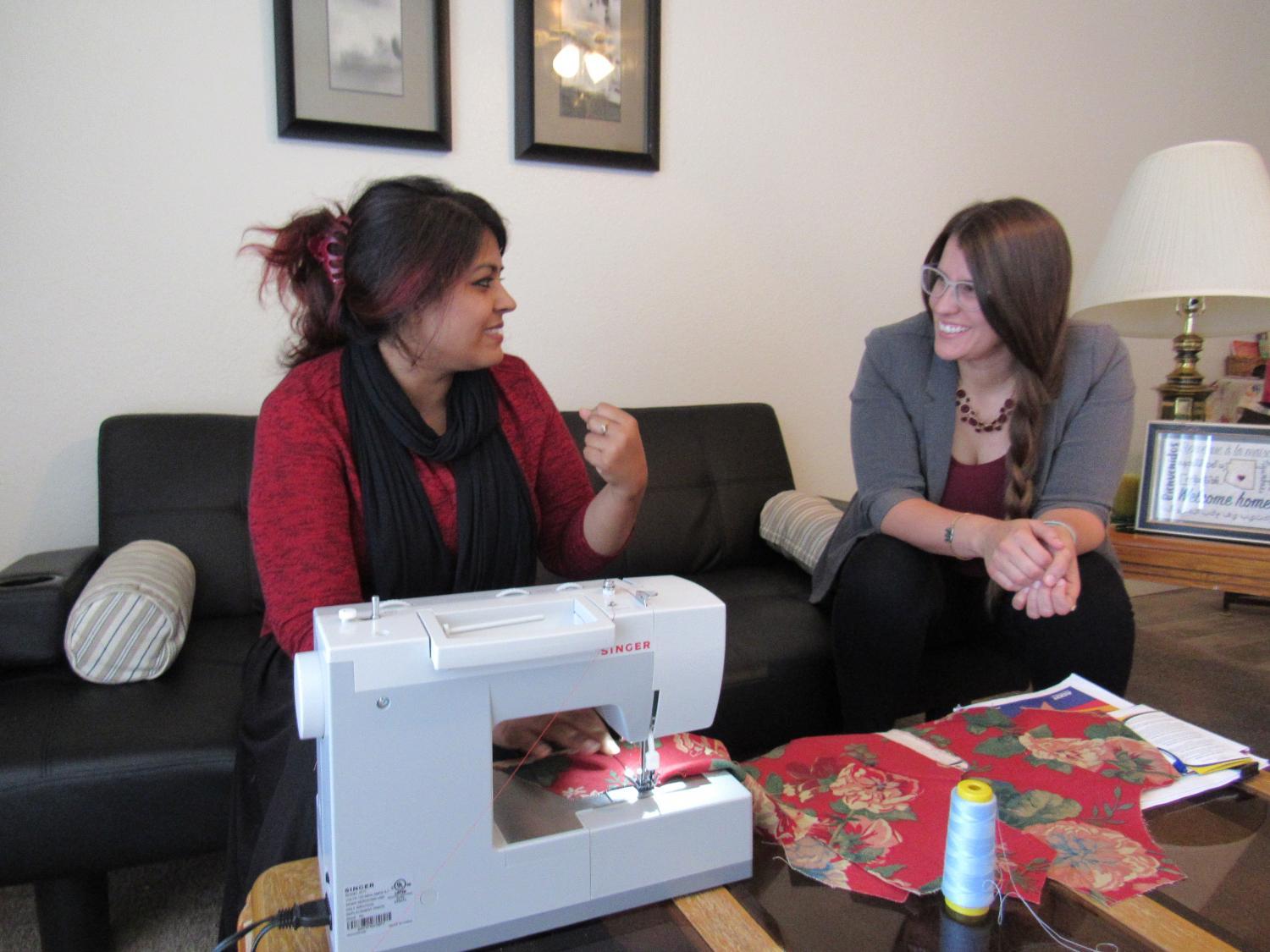 Now living in a Phoenix apartment, Amir sat on the edge of her couch, and fed red thread into a sewing machine.

“I’m going to start my own business, inshallah,” she said.

Inshallah means God willing in Arabic. Amir and her family are Muslim refugees — four of the few let into the United States this year.

“We lost everything in our country,” she said.

Amir worked on a vest with a floral design. Sometimes her style is Pakistani or Indian. Lately, she’s kept a close eye on U.S. fashion.

“You have to have peace of mind to create something,” she said. “And if I’m not in that condition, I can’t stitch.”

Amir has a lot to do besides build her business: Help her kids adjust to life in the United States, take her husband to regular doctor appointments, and find a job. The peace of mind she feels is due in large part to support from the International Rescue Committee (IRC).

But the stream of refugees flowing into the United States has been reduced to a trickle, which means government funding has fallen for humanitarian groups that receive the world’s displaced.

The national infrastructure for refugee resettlement was built to take in about 85,000 people a year, Poulin said.

President Donald Trump’s administration cut the cap to 45,000 this year. But the United States will likely let in less than half of that number.

“This is a systematic attempt to try to deconstruct resettlement,” Poulin said.

When the government clears a refugee to enter the U.S., the groups that welcome them get about two weeks of notice, said Connie Phillips, president and CEO of Lutheran Social Services of the Southwest (LSS-SW).

“And we go into action,” she said.

They find an apartment, furnish it and stock it with food. When the refugee arrives, they’re met by a case manager who speaks their language. Next comes ongoing orientation to U.S. society.

“For that, we’re paid a fee,” Phillips said. “And that fee is a per-person fee that comes with the refugee. If we’re not doing resettlement work, then we’re not receiving the fees.”

The Phoenix office of LSS-SW based this year’s budget forecast on resettling about 600 refugees. But it’s on track get only half, and it's led to a crisis.

A State Department spokesperson said the United States continues to resettle people fleeing persecution and conflict, while upholding the safety and security of Americans.

Humanitarian groups say they’ve responded with strong fundraising and focusing on other programs with different funding sources of income.

But Lutheran Social Services of the Southwest has still downsized.

“You are seeing the infrastructure crumple across the country,” said Nina Zelic, director of refugee services for Lutheran Immigration and Refugee Service.

With so few refugees to serve, Zelic said staff with decades of experience has walked away. Bonds with key contributors of resettlement infrastructure are also dissolving.

“You are seeing the infrastructure crumple across the country.”
— Nina Zelic, Lutheran Immigration and Refugee Service

“And then it takes years to build back those relationships with strong employers — who do well by the refugees, who treat them well, who pay them well,” she said. “And landlords who want to rent to people who have no credit history.”

At her Phoenix apartment, Noreen Amir reviewed her inventory of brightly colored clothes, many with intricate patterns, with the micro enterprise coordinator from the International Rescue Committee. The women discussed the importance of setting prices for Amir’s wares. The coordinator also reminded Amir to regularly post pictures of her work on Instagram.

Without help from IRC, Amir said her family could not make it, and she wants them all to become U.S. citizens.

“The freedom, we can feel it here,” Amir said. “And the thing is we are safe.”

The chance for resettlement agencies to help more refugees feel safe depends on how many are allowed into the United States. If the flow stops completely, leaders say they will continue to serve the refugees who are already here.