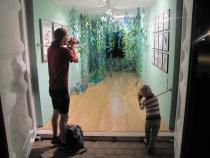 They say creating art is about thinking outside the box. But in downtown Phoenix, some art is made and displayed in the box.

In a gravel lot near Roosevelt and 5th streets, three large unassuming shipping containers sit like barges on the river.

Sarah Hurwitz approaches one and after some considerable effort, opens the heavy, latched door.

She said inspiration came to her as soon as she saw the space.

That’s exactly what she did. Paper leaves and toadstools line the walls and hidden treasures roost in the trees while animal sounds play in the background.

It has the look of a professional artist, but the feel of a youthful school project. It’s a look Hurwitz said she developed while creating exhibits for children’s museums.

“There’s a large green mirror in the back, there’s some flora and fauna, some birds that are flying, some snakes that are crawling and some binoculars to find all of those creatures,” Hurwitz said.

There’s even a key in the front of the space with a special bird species of Hurwitz’s creation.

“I have the ‘Emerald-Breasted Bird of being bored of social media but looking at it anyway’ and then there’s a 3D version of that bird in the box and you can find the bird,” she said.

Through grant money provided by the Roosevelt Row Community Development Corporation, a series of artists will be contracted to show their work in the containers each month.

Hurwitz used to show in the Eye Lounge gallery across the street and has another show coming up in a more conventional gallery. But this is obviously a unique showcase. Light fills the container and forms a white rectangle that stands out against the blackness of the night.

“Because this is a big open container to the outside, whether you want to or not you’re going to look at art when you walk past,” she said.

But she hopes people will take the opportunity to come inside and experience the jungle in a box in the middle of the desert.