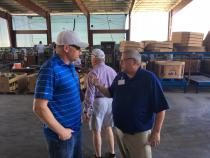 After only a few months on the job, the U.S. Department of Agriculture Undersecretary for Farm Production and Conservation Bill Northey stopped by one of the largest watermelon producers in America on Tuesday.

Under a huge canopy on Rousseau Farm in Litchfield Park, dozens of workers sort watermelons on conveyor belts and into cardboard boxes. This distribution center will put out 2 million pounds’ worth of the green fruit on Tuesday alone.

Northey stopped here for a tour on his day trip through Arizona.

He sat with fourth-generation Arizona farmer Will Rousseau to hear comments about how America’s domestic farming programs could be improved.

“I think EQIP could do a lot better job of getting conservation dollars into mainstream producers’ hands,” Rousseau said.

EQIP stands for Environmental Quality Incentives Program. It’s through the conservation arm of the USDA, which Northey oversees.

Rousseau, who manages one of the largest watermelon farms in the country, says he used EQIP in the past to put in water-saving sprinklers, but now finds the program difficult to use.

“It’s important to be able to get out and hear how our programs are working and take some things home to see what we should be working on,” Northey said.

He said being from Iowa, learning about problems in Arizona helps policy down the road.

“Certainly right now in the drought we’ve got, some rangeland producers are really struggling and we have some programs that can help just a little bit with that," Northey said. "Like replace some of the feed costs or help with watering.”

Northey made stops in New Mexico before coming to Arizona.