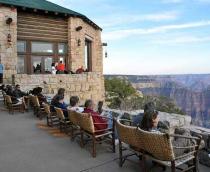 National Park Service
Visitors to the North Rim enjoy the view from the patio of Grand Canyon Lodge.

National Park officials have asked people at the North Rim of the Grand Canyon to limit their water usage as crews work to fix a pump that supplies the water.

Visitors to the North Rim have been asked to flush toilets less frequently and take shorter showers and North Kaibab Trail backpackers must hike in their own water. The Grand Canyon Lodge is using disposable plates and is serving water only on request.

About 600,000 people visited the North Rim last year, one-tenth of all visitors to Grand Canyon.

Park spokeswoman Emily Davis said this is not affecting the more popular South Rim. All of Grand Canyon gets its drinking water from Roaring Springs, but there are two separate lines that supply the north and south rims.

The park is still assessing the environmental impact of replacing the trans-canyon pipeline, a $124 million project.