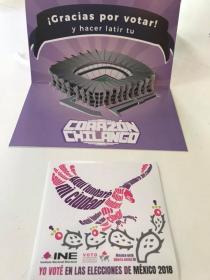 Courtesy: Luis F. Blanco
Mexican ballots for expat voters were sent by mail, and included a pop-up letter and a sticker.

MEXICO CITY-  A historic number of voters are expected for the July 1 presidential elections in Mexico. And there’s something unusual already: the number of foreign votes and foreign observers monitoring the elections.

“Day after day we are breaking the record, which grows at a rate of 5,000 votes per day,” said Lorenzo Córdova, president of the INE’s council.

Most of the votes from expat Mexicans are coming from the U.S. Foreign votes arriving until June 30 will be included in the total.

And the institute also expects a record for foreign observers. So far, 711 visitors from 55 countries have been accredited.

"The current election is the most watched, the most explained, the most documented and, therefore, also the most free of all the elections that our country has organized," Córdova stated.