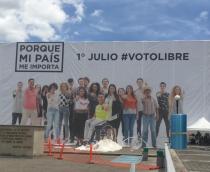 MEXICO CITY — On July 1, Mexico will head to the polls for federal and local elections, and a new president will be chosen. They are expected to be the largest elections in the country’s history — but they’re also among the most violent.

About 89 million Mexicans will be able to vote, while thousands of expats have already cast their vote by mail. The Mexican National Electoral Institute is expecting more than 100,000 foreign votes by Sunday, the vast majority coming from the United States.

“The campaign period has been characterized by an intense political debate, a broad participation of the society and an indisputable freedom of expression; all of them positive signs of the democratic evolution of Mexico,” said Mexican president Enrique Peña Nieto in a public statement on Twitter.

But the process has been tainted with violence. At least 123 local candidates have been killed, and 22,000 blank ballots were stolen in rural Mexico by unknown armed assailants.

Peña Nieto invited Mexicans to vote as a way to fight violence.

"Regrettably, there's been several violent incidents in different locations. The best way to express our rejection towards these actions is by voting,” Peña Nieto said. “Let's make July 1 a true celebration of democracy."

Sergio Bárcena is an electoral researcher at Mexico City’s Tec de Monterrey. He says criminals want to intimidate voters, but their efforts might prove to be inefficient.

Mexicans will elect more than 18,000 public officers this Sunday.