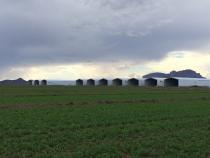 Lawyers are meeting in court Friday to argue their case in a civil lawsuit claiming local egg company Hickmans Family Farms is a nuisance in Tonopah.

The confusing thing about this case is that it’s an amalgamation of several claims.

One where citizens in Tonopah are claiming the 4 million hen chicken farm Hickmans built in 2014 is a public nuisance. Another where Hickmans has sued other locals asking for a judge to declare that they are not a nuisance. And two others where local businesses say the farm has hurt property values and profits.

“Our claim is that Hickmans is directly taking away the ability of the citizens of Tonopah to pursue happiness and enjoy their property,” Verderame said.

Friday's oral arguments will be on motions to dismiss Hickman’s declaratory lawsuit and Hickman’s request to keep some evidence confidential, among others.