A ‘Toy Story’ That’s Hitting Mexico And The U.S. 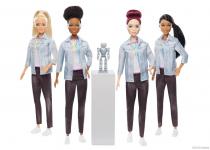 Mattel
Robotics Engineer Barbie was the most recent model of the popular doll launched by Mattel.

MEXICO CITY — A California-based company is bringing a new concern to jobs and manufacturing in Mexico and the U.S., and it’s not about the North American Free Trade Agreement (NAFTA): it’s all about toys.

It's not a game anymore for toy maker giant Mattel, which is terminating 2,200 positions — representing 22 percent of global non-manufacturing workforce — while closing its factories in Mexico, both of them in the state of Nuevo León.

“As durable as the tremendous franchises of Barbie and Hot Wheels are, the market is dynamic,” said Erik Lee, executive director at the North American Research Partnership, a nonprofit in Phoenix focused on trade.

Lee said Mattel’s move responds to the toy industry crisis, after retailer Toys "R" Us declared bankruptcy and closed its stores in the U.S.

“This seems to be part of an ongoing restructure that Mattel is doing, and it has more to do with the dynamics of the toy industry and the decline of sales in North America more than ongoing trade negotiations between the Mexico, the United States and Canada,” Lee said.

And although the issue is not related to NAFTA, Lee says governments need to keep in mind that corporations are powerful agents with impactful decisions on a global scale.

“The market is ferociously competitive and the toy market is extremely dynamic and competitive,” Lee said, “and manufacturing in Mexico is just one option that companies have.”

EDITOR'S NOTE: This story has been modified to correct wording in a quote from Erik Lee.