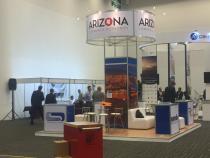 Rodrigo Cervantes, KJZZ
The Arizona's booth at the Aerospace Summit in Querétaro, Mexico, in 2017.

MEXICO CITY - According to the Arizona Commerce Authority, more than 1,200 aerospace companies operate in the state. And as the industry grows, it works on ways to expand and make Mexico one of its prime allies.

The annual Aerospace Summit in the city of Querétero, in central Mexico, is taking place this week. It is one of the most important events of its kind, and once again, trade representatives from Arizona will be there.

José Andrés García is the Phoenix trade representative in Mexico City. This is the fourth time Phoenix will be at the summit, and there’s a reason why.

“The Mexican commercial fleet has significantly grown in the past 10 years,” García said.

The growth comes after the expansion of low-cost airlines in the country. And just like in Arizona, the aerospace industry is booming in Mexico.

García says he is focusing on helping the Mexican industry find Arizona suppliers, particularly on maintenance, repair and overhaul.