Mariana Dale/KJZZ
Kathy Hoffman is a first-time candidate and most recently, a speech therapist in the West Valley. 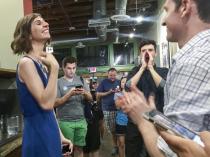 Mariana Dale/KJZZ
“So far I am very excited and I’m just trying not to jinx it, and I’m feeling cautiously optimistic,” Kathy Hoffman said shortly after her primary opponent texted his congratulations.

“So far I am very excited and I’m just trying not to jinx it, and I’m feeling cautiously optimistic,” Hoffman said, smiling.

A few minutes later, she picked up her phone and opened a text message.

Through the end of the last school year, Hoffman was a speech therapist in the Peoria Unified School District. She’s taught across the state.

Hoffman is one of more than a dozen educators running for elected office.

The last Democrat to serve as state superintendent was C. Diane Bishop, who was elected in 1986 and held the office until 1995.

Recent superintendents have been mired in conflict.

An aide of current Superintendent Diane Douglas tried to fire two top Arizona State Board of Education staffers shortly after she took office, only to be stopped by Gov. Doug Ducey.

Douglas’ predecessor, John Huppenthal, was revealed in 2014 to have used a pseudonym to go online and make comments such as calling people on public assistance “lazy pigs” and comparing Mexican-American studies programs to the Ku Klux Klan.

In 2017, a federal judge said the ban was motivated by racism.

“I decided to run for this office when I saw that our elected officials were failing my students as an educator,” Hoffman said.

She cited limited resources in the classroom, diminishing health-care benefits and a lack of advocacy on the behalf of students and teachers in Arizona’s Department of Education.

Schapira has been a  high school teacher, college professor and administrator at the East Valley Institute of Technology.

“To go from the classroom, being an educator, to this level of being an advocate for all students, for all teachers has been an incredible experience,” Hoffman said.

It’s unclear who Hoffman might face in the general election.

Incumbent Diane Douglas trailed in a five-way Republican primary behind education professor Bob Branch and former California congressman Frank Riggs. As of late Tuesday, the race was too close to call.

Education is a top-of-mind-issue for Arizona voters this year. Teachers this spring went on a historic six-day walkout to demand increased pay and classroom funding.

Both Republican and Democratic candidates running against Douglas claimed she failed to effectively lead the Arizona Department of Education at a time when educators were frustrated enough to storm the Capitol.