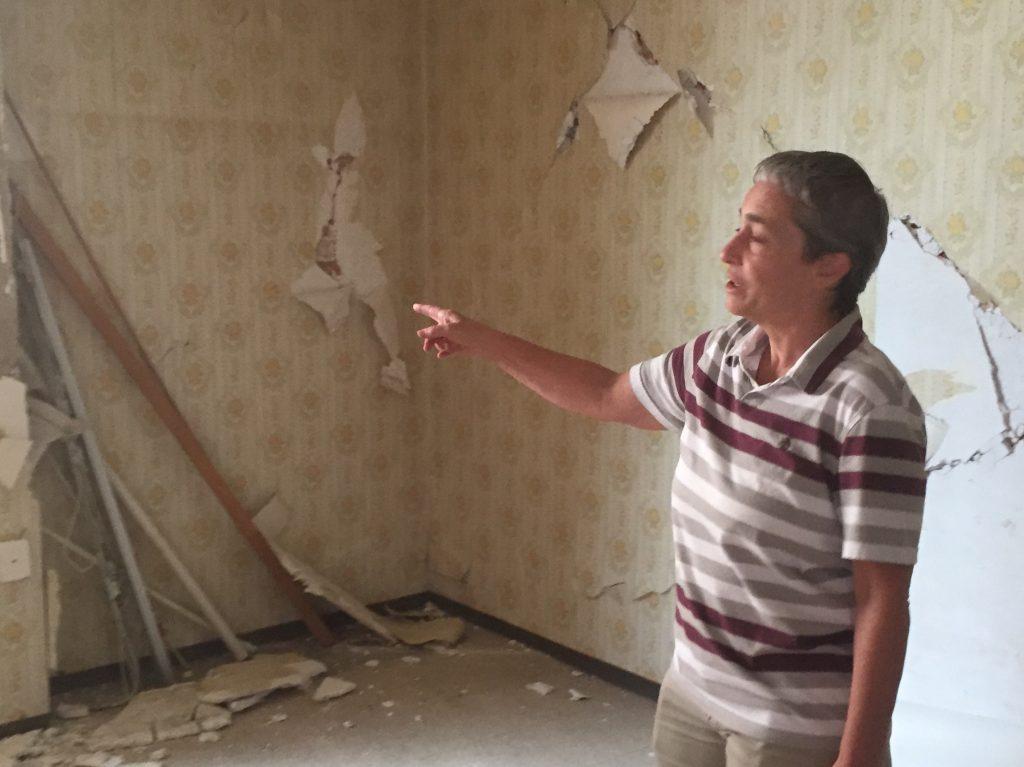 Rodrigo Cervantes/KJZZ
Nuri Aguilera shows the damage inside one of the apartments in a Mexico City building where she used to live.

MEXICO CITY — Sept. 19 marks the anniversary of Mexico City’s two most devastating earthquakes, one in 1985 and the other one just a year ago. Today, the city still debates on what were the lessons learned and what needs to be done to diminish catastrophic effects in the future  — not only in Mexico’s capital, but in other vulnerable regions.

Among shattered glass and rubble, Nuri Aguilera shows me inside the apartment building in Mexico City where she used to live. The basement is flooded and many walls are cracked open.

Aguilera is a mathematician, but after the 2017 earthquake, she abandoned her profession to focus on saving her damaged property.

“Yeah, we can rescue it. Definitely. Definitely — the problem is the money,” Aguilera said.

Aguilera and some of her neighbors have been camping for a year outside of the building, inside improvised tents right in the middle of the street. They’re waiting for the government’s reconstruction subsidy, while gathering resources. 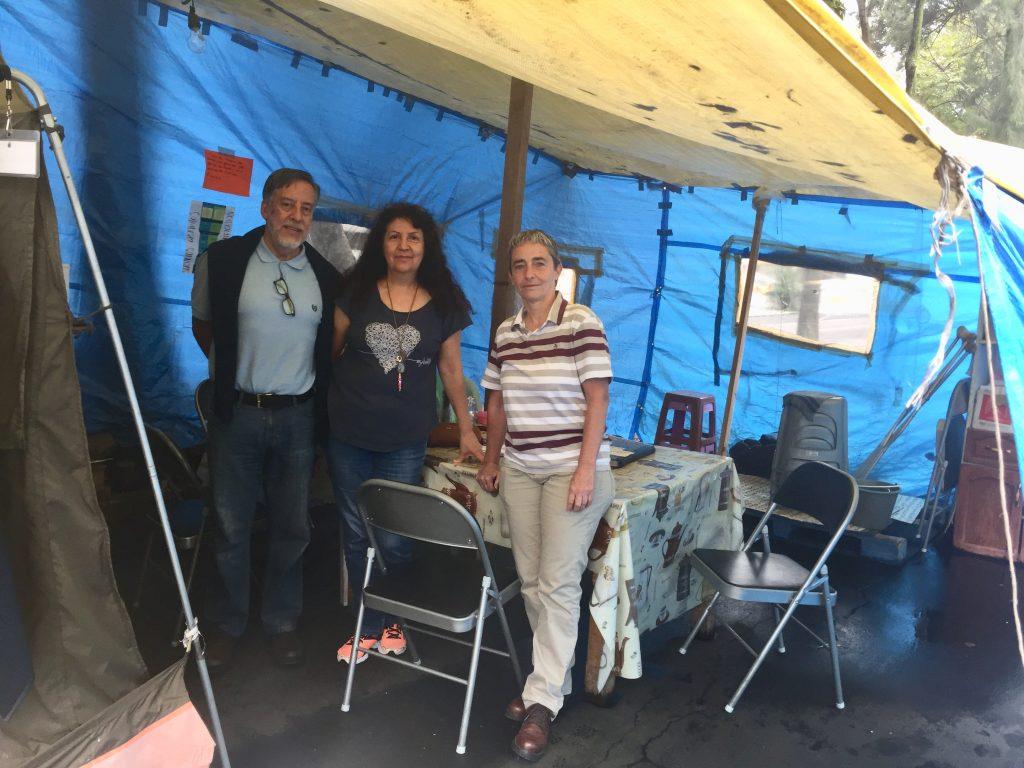 Rodrigo Cervantes/KJZZ
Nuri Aguilera (right) and two of her neighbors inside the tent where they camp outside their affected building.

“It’s very sad to see how it is right now. But we are here. We are still here. And we know it’s going to happen again. We know,” the mathematician said.

But the problem is not only to repair damaged properties, Aguilera said, but to eradicate the long lasting corruption in the construction industry.

“There are new buildings that collapsed. New!” Aguilera said, explaining that some of the debris she saw in other buildings came from a poor mix of concrete and sand.

Aguilera narrated that it’s hard to live this way and for this long. She said that she hopes that people become more solidarian, the government more human — and that no one forgets about people, like them, who still struggle.

Corruption Under The Debris

Miriam Castillo works with the nonprofit Mexicans Against Corruption and Impunity. They investigated more than 300 buildings that fell or were damaged after last year’s earthquake. They found that many buildings used cheap materials or were built without following the city building regulations, even under the government’s blessing.

The researcher said the current regulations work, but there needs to be a more aggressive prosecution to those who fail to comply, including jail. But for her, corruption works like a system where those responsible are always protected and at all levels.

“I have to confess that I have more fears than hopes,” Castillo said. 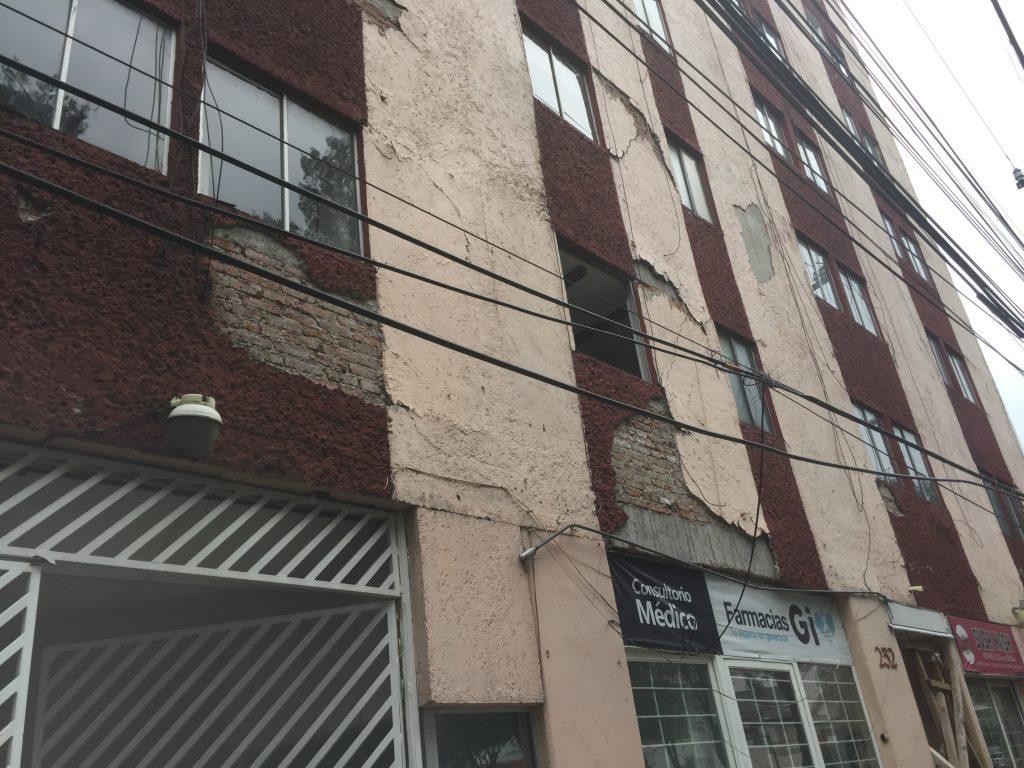 Rodrigo Cervantes/KJZZ
The facade of one among hundreds of buildings in Mexico still damaged after 2017's earthquake.

Jorge Meléndez is a sales agent for construction material business located in front of a fallen building in Mexico City where 11 people died.

The remains of the building were cleared, but street is still closed and Melendez’s business struggles.

“The impact has been brutal. Let’s say we had an average of 15 customers coming per day before the earthquake, and it dropped to zero,” he said. They are waiting for their lease to be over to move.

The salesman says the city needs to learn from the catastrophe, but excessive construction prevails in many areas, making water scarce and buildings sink.

“These area, the Benito Juárez district, has been severely affected and it’s still affected by the construction of tall buildings that even surpass the city’s height limits,” Menéndez said.

And Meléndez’s experience in construction materials makes him think that there are alternatives to the heavy cement and steel currently used. He said that seismic regions like Mexico City should follow the example of architect Norman Foster, who uses lighter, cheaper and more flexible materials than concrete, like fiberglass.

But the concerns go beyond the surface. One of the main problems in Mexico City is its clayey land, since most of it was built on top of a lake that was drained after the arrival of the Europeans in the 1500s.

Studies after the 1985 earthquake divided the city in three main areas depending on the soil’s density: the zone located right where the lake was, the higher areas in the valley with more stability and a third transitional area in the middle of them.

But more needs to be done, according to Javier Lermos, a seismic engineering researcher at the National Autonomous University of Mexico.

“This is a problem not only here, but also in other places prone to earthquakes like San Francisco: new studies are needed to analyze micro-zones and how they react,” Lermos said.