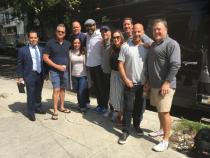 Rodrigo Cervantes/KJZZ
José Andrés García from the City of Phoenix's Office in Mexico City (left) and members of the Phoenix chapter of Entrepreneurs Organization.

MEXICO CITY — A group of entrepreneurs from Arizona visited Mexico City this week. And the goal of this business trip was to get a better understanding of another culture, while building partnerships.

Daron Webb manages a tax consulting practice. He is part of the Phoenix chapter of  Entrepreneurs Organization (EO), a global business nonprofit.

Ten people from the chapter from different backgrounds, including Webb, traveled to Mexico’s capital for business while exploring the city.

“It’s a great opportunity to learn from other cultures and countries and how they do it,” Webb said. “It’s a business exercise to do a reflection and set goals around improving your business, but also as a personal retreat to grab some culture and experience something new.”

Their trip included meetings with the City of Phoenix’s office in Mexico and with local members of EO.

“Starting those relationships can lead to greater business opportunities for both,” Webb said.

Webb explained that EO members need to be business co-founders or controlling shareholders with gross sales of at least $1 million. The organization has around 4,000 members around the world in 45 countries.