For decades, land managers and ranchers in northern Arizona dealt with forest fires in a way that led to an overpopulation of trees. Now, agencies are working to fix that — but the sheer number and high cost of doing so is one hurdle they’ll have to overcome. 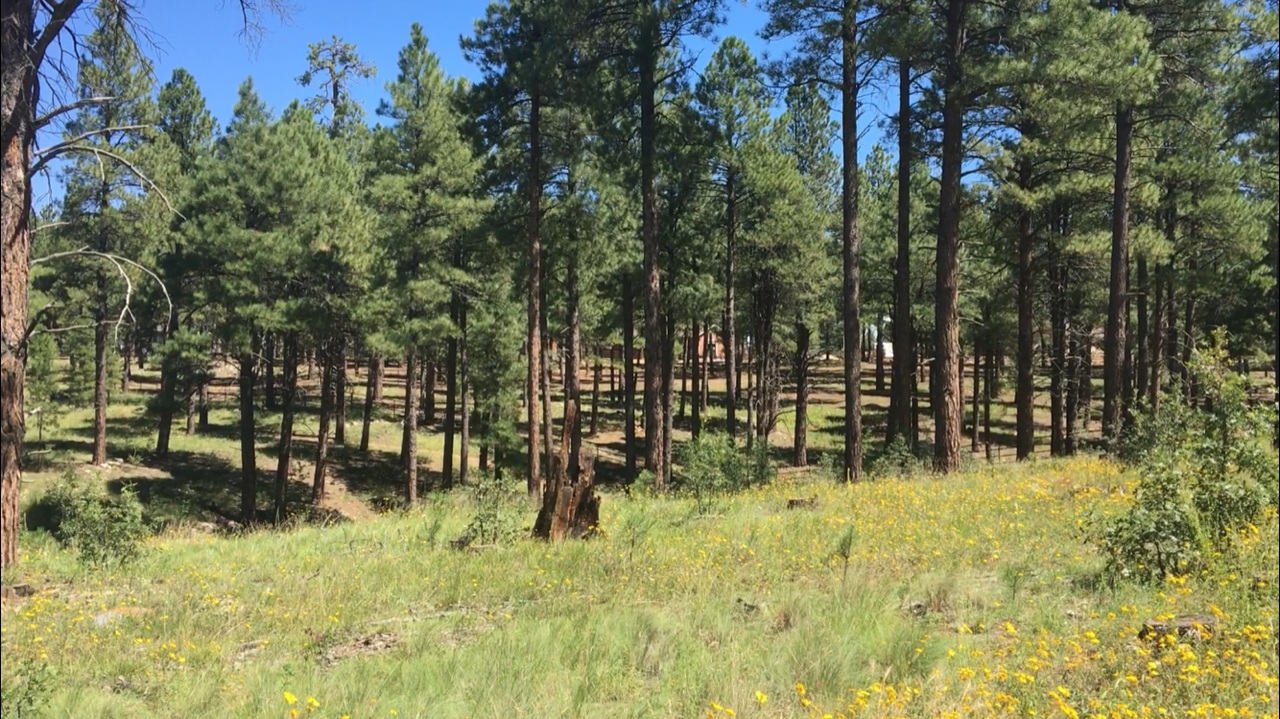 Casey Kuhn/KJZZ
Too many trees in Northern Arizona's forests could be a recipe for worse wildfires in the future.

Just south of Flagstaff, locals walk along National Forest-managed land, enjoying the thousands of green Ponderosa pines blanketing the base of the San Francisco peaks.

While pretty, the dense forest is an unnatural sight. The way it evolved over time was to be naturally sparse until humans changed the landscape.

And now, humans are trying to change it, again.

“So we are now on the Forest Service ground,” said Steve Rosenstock, Arizona Game and Fish Department's statewide coordinator for habitat enhancement.

“The national forest," corrected Brienne Pettit, who is with the U.S. Forest Service.

"Yes, you are now on the Coconino National Forest,” Rosenstock said as we drive onto land just south of the community of Moutainaire.

This public land is being managed by a wealth of agencies in this partnership, including AZGFD, U.S. FS and the Grand Canyon Trust.  4FRI plans to restore 2.4 million acres of forest stretching from the Grand Canyon to the New Mexico border.

That function includes fire, which, if a forest is thinned of excess trees, will burn low and slow through the underbrush. Older ponderosa pines have evolved to survive that kind of fire, not the type of hot and fast flames that come with something like the large Wallow and Rodeo-Chediski Wildfires.

The restoration effort aims first for areas around communities, like Mountainaire.

"A fire can come through but does not set the entire stand of trees on fire and doesn't threaten homes because there's a barrier there where the forest is more open and fire can burn on the ground, lower to the ground in some of the smaller trees in a non-threatening way," said Travis Bruner, interim conservation director at the Grand Canyon Trust.

If a wildfire ripped through an overcrowded forest near communities, it could throw embers onto the land and be very destructive.

Fleishman said the major wildfires create hundreds of millions of dollars of damage and years of consequences.

That’s because the embers bake the soil and leave a hard surface for monsoon rains to wash down.

Those rains can also end up in the reservoir system that supplies about 60 percent of Phoenix’s water.

“You have this vast amount of water that has all this energy and it just rushes across the landscape and it basically peels the soil and everything attached to it,” said Charlie Ester, SRP surface water manager.

That nasty runoff after a large wildfire up north will ultimately affect cities which have to treat this contaminated water for years.

“Not to mention all the ash that’s leftover and other harmful chemicals as a result of the combustion of the trees," Ester said. "It really can result in poor water quality of our entire reservoir system.”

The watershed’s natural cycle has changed thanks to human logging and ranching starting back in the late 1800's.

The 4FRI effort to thin those forests back to their naturally evolved states has been a bumpy road.

“That’s a very, very unique thing," he said. "In these times when budgets are tight, having that other source of funding can make the difference between a project happening, or not.”

The problem is that the USFS doesn’t have the resources to complete the giant task alone and in a reasonable amount of time, but attempts to bring industry in to help haven’t been easy. There aren't many economically viable ways to use the young trees and no lumber mills in Flagstaff. The partnership is still working to entice more businesses to help manage parts of the public land.

Rosenstock said the value of a thinned forest is in its sustainability.

“Mother Nature ultimately has the control over things, she holds the big levers," Rosenstock said. "But we’re doing all we can, particularly in these kind of restoration efforts to get these systems back into balance, so they’ll be more capable of weathering those droughts when they do occur.”

After the driest winter on record, and a normal monsoon season, the 2018 wildfire season was mild. But if more dry winters are to come, the current state of Arizona’s ponderosa forests could be a tinderbox waiting for an errant spark.

This story is part of “Elemental: Covering Sustainability,” a new multimedia collaboration between public radio and TV stations in the West, and part of ongoing Colorado River coverage in partnership with KUNC in Colorado. Luke Runyon reports for KUNC, based in Greeley, Colorado.