New Trade Agreement In The Region Raises The Bar In Mexico 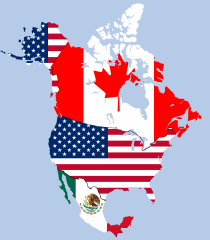 MEXICO CITY — Canada finally agreed to sign a revised free trade agreement with Mexico and the United States. In the next months, the governments from the three countries will have to revise it and, if accepted, ratify it.

Some call it the U.S.-Mexico-Canada Agreement. Others say it’s the new North American Free Trade Agreement or NAFTA 2.0. Erik Lee is the director of the North American Research Partnership, a think-tank based in Arizona. And for him, this is NAFTA 1.7.

“It’s not quite a full upgrade or a full update, but it’s significant enough that it would trip up your computer if you didn’t upgrade to this version, to put it that way,” Lee said.

In Mexico, the current and the elected administrations praised the new deal. But for Lee, there’s more to be done.

“I really don’t believe Mexico gained a lot, this was mostly a defensive operation,” said Lee.

Mexico is one of the countries with more trade agreements in the world, yet very dependent to its trade with the United States, Lee said. The researcher considered that Mexico still needs to take more advantage of those deals to become more competitive.

“It’s definitely clear that Mexico will have to diversify its trading arrangements much further,” Lee said.