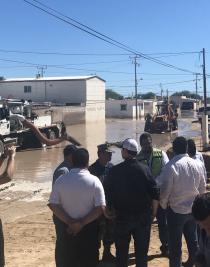 Puerto Peñasco — better known as Rocky Point to Arizona tourists — was doused with 4 inches of rain in just three hours Monday when the remnants of Hurricane Rosa made landfall as a tropical depression.

He says the rain caused heavy flooding, affecting about 30 percent of the population, and damaging homes and roadways.

On Wednesday, the Sonoran government declared a state of emergency in the northeastern part of the state, including Rocky Point.

The damage had mostly been repaired as of Thursday. However, the road from Rocky Point to Caborca is still impassable, Carrillo said.

But tourists shouldn’t be deterred from visiting, he says, because the town’s hotels and beaches are open for business.

“It’s safe already. Everything is in order,” Carillo said. “Now we need to reactivate business, reactivate tourism and reactivate Puerto Peñasco. That’s what we’re working on.”