After 50 Years, The Iconic Mexico 68 Olympics Design Is Still Revered — And Disputed 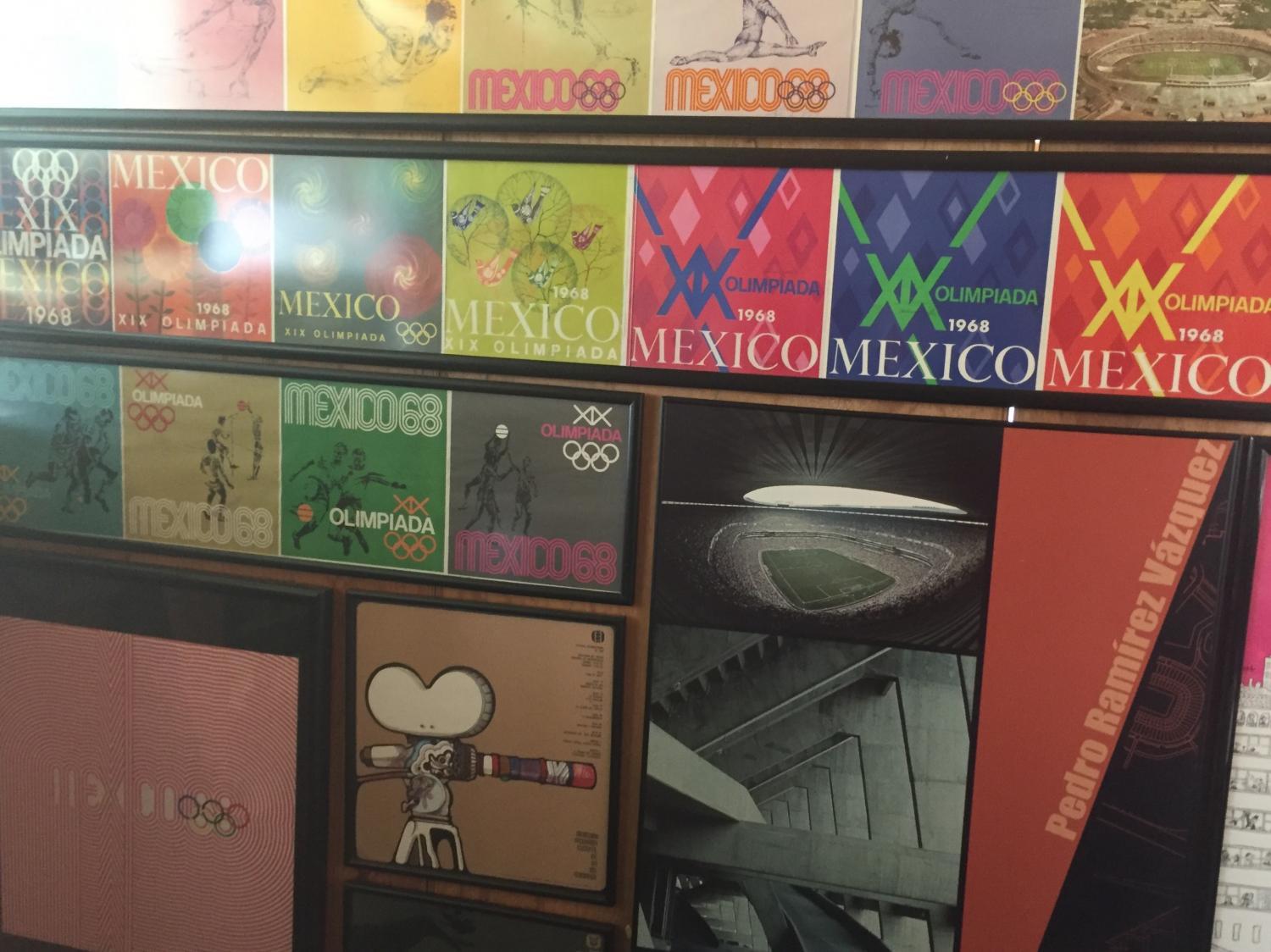 The Games’ vibrant visual identity became the icon of an era and a country, and the style is celebrated as a cornerstone for contemporary graphic design.

But its success also brought an ongoing dispute between people from both sides of the U.S.-Mexico border.

In the official movie of the Mexican Olympic Games, we can see the legendary design everywhere: the font made out of parallel lines, the bright colors and the simplistic iconography. There’s the emblematic Mexico 68 logo carrying the Olympic rings and the minimalist icon with the dove of peace.

“Design can transcend into culture,” said Christoph Niemann, a German illustrator known from his work in The New Yorker and his appearance on the Netflix series “Abstract.” 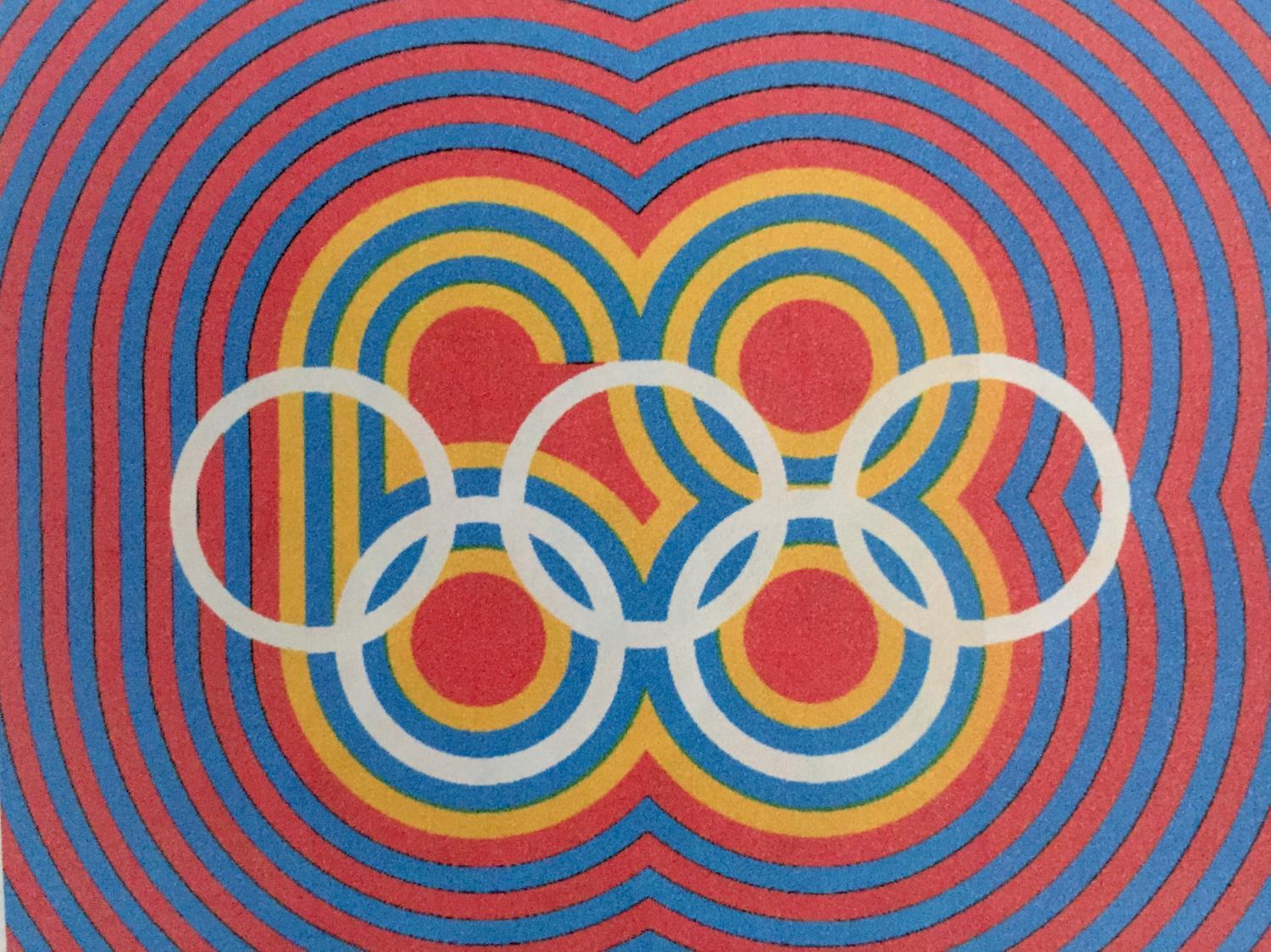 Rodrigo Cervantes/KJZZ
Parallel lines, bright colors and the integration of the year with the Olympic Rings are part of the identity of the Mexico 68 graphic design.

He recognizes the importance of the Mexico 68 graphic identity, which he discovered from a jacket he loves.

“Years ago, I saw this beautiful dark green jacket that said ‘Mexico’ on the back with this really cool type ad. Only later I learned the whole history of designing it, and what it meant and of course how advanced it was,” Niemann recalled.

Niemann says successful design like this one helps integrate millions of people in just one place, becoming functional, but also identifying a specific place or time.

“Back then, it caused an impact as something modern, yet strongly connected to the Mexican culture, turning it into a reference,” said Dr. Alderete, a well-known designer based in Mexico. He found some inspiration on the Mexico 68 image to create the graphic concepts for the International Graphic Alliance (AGI Open) Design Conference in Mexico City.

Others like them see the Mexico 68 concept as a cultural icon and the visual identity of Mexico and the 1960s. The Mexican student movement of 1968 reinterpreted and reused it in propaganda. And today it’s making a comeback through retro culture, nostalgic illustrators and brands like Adidas.

But behind the font, colors and icons, a conflict has lingered for five decades between an American designer, Lance Wyman, and a Mexican architect, Pedro Ramírez Vázquez. 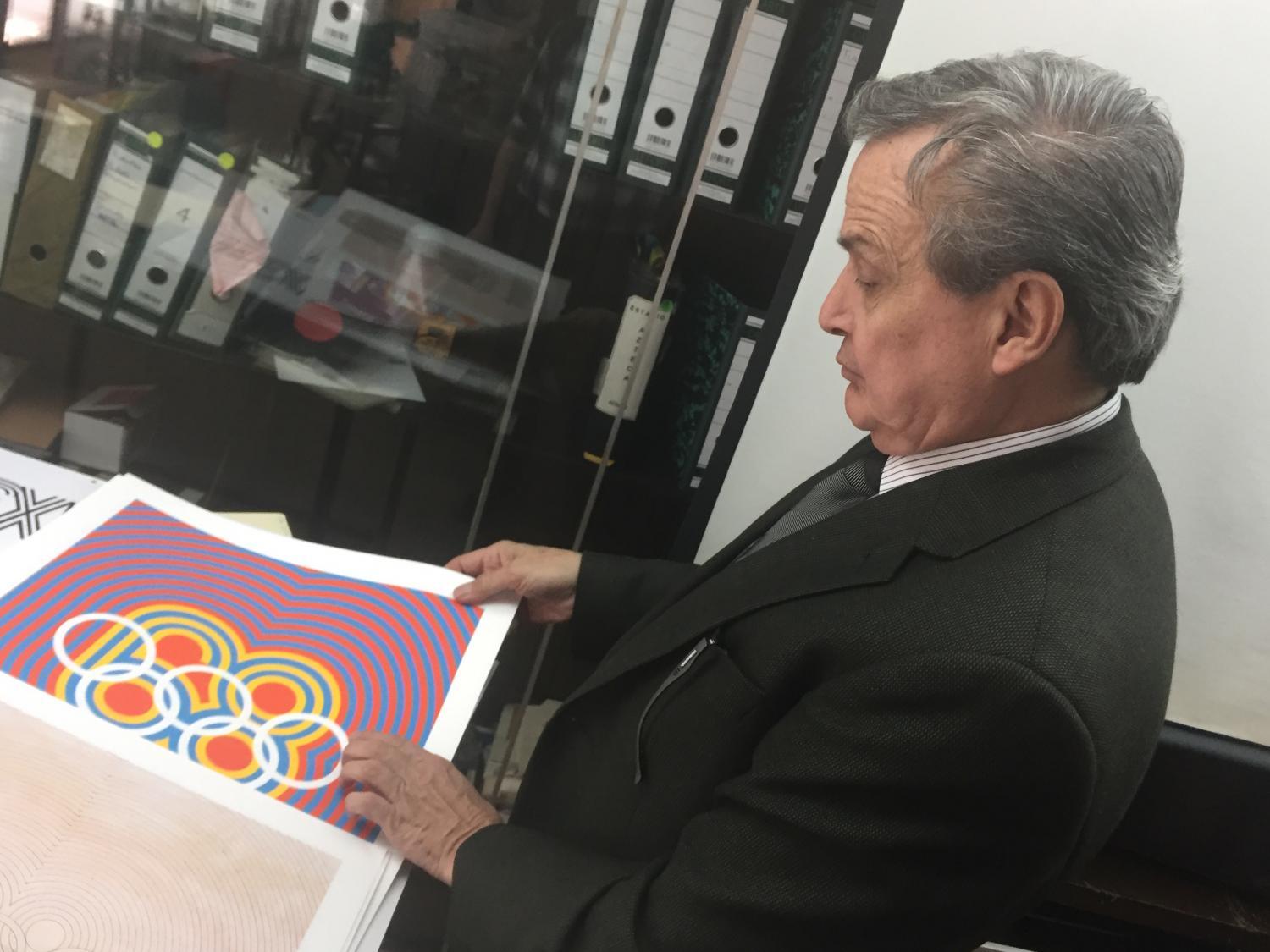 Rodrigo Cervantes/KJZZ
Javier Ramirez, architect and heir of the Ramirez Vázquez estate, shows a print with one of the Mexico 68 logos.

Javier Ramírez walked inside a house in Mexico City that looks more like a museum, with photos, sculptures, files, posters and memorabilia from Mexico 68 everywhere.

It’s the estate from his deceased father, the renowned architect Pedro Ramírez Vázquez.

Ramírez Vázquez was responsible for the construction of the Aztec Stadium and the National Anthropology Museum in Mexico City, among many other emblematic buildings. He also served as president of the organizing committee of the Mexico 68 Olympics.

Wyman claims to be the author of the Mexico 68 graphic concepts. But Ramírez, an architect like his father, says it came from Ramírez Vázquez’s ideas and the teamwork from many, including Beatrice Trueblood, Eduardo Terrazas and Wyman himself.

“It is one thing to help develop the project, it is another to create it,” Ramírez said. He showed dozens of documents: letters, the intellectual property title and sketches of the logo that, he says, prove his father’s authorship.

“Pedro Ramírez Vázquez always revisited cultural constants in his projects,” Ramírez said. For instance, the parallel lines on the font comes from patterns developed by the Huichol people, he explained.

“The Olympic identity comes from a contemporary country and its culture,” said the son of the famous architect.

Ramírez Vázquez saw in the Olympics an opportunity to honor the cultural heritage of Mexico, while showing a modern country to the world and inviting for global peace on a turbulent year, Javier Ramírez said. But he thinks that his father’s legacy has been tarnished by the conflict with Wyman. 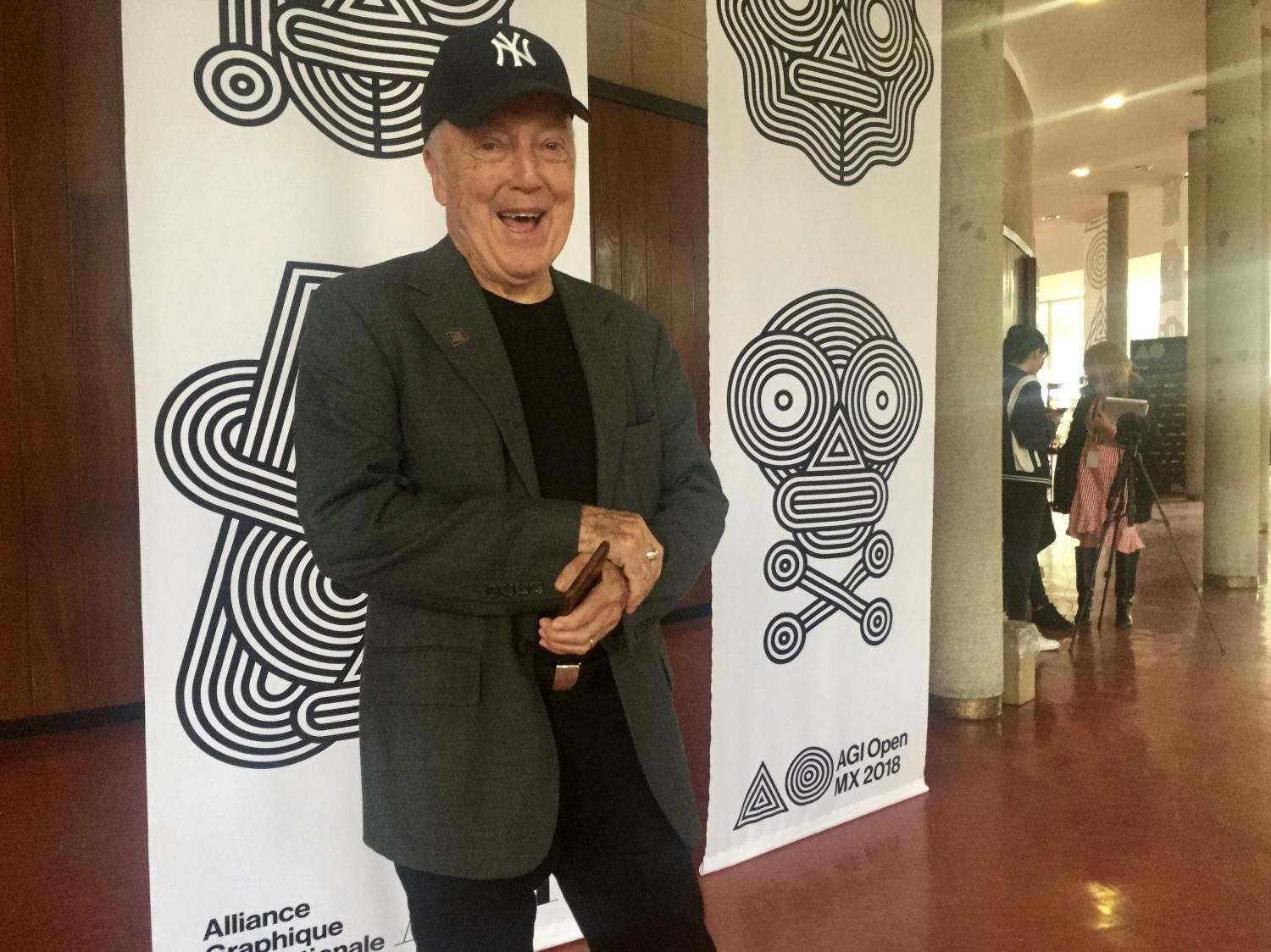 On the other side of the city, Lance Wyman, now in his 80s, walked into the AGI Open design convention like a rockstar, waving and taking selfies with fans.

Wyman’s work include corporate logos and the iconography for the subways of Mexico City and Washington, D.C,  as well as a logo for the U.S. Bicentennial Celebration. He currently works on a project with the sports brand Puma, based on the Mexico 68 identity that he claims as his.

“I can’t speak Spanish, but I can make icons!” said the well-known designer, laughing.

Wyman claims to be the author of the graphic concepts for the Olympic Games after winning a contest to work with the committee.

“I did the logo, I mean, and it was thanks to that that we won the competition,” he said.

But Ramirez Vázquez’s son said there was no contest. Wyman, on the other hand, said he asked for his credit when he first started to work with Ramírez Vázquez — but the deal was closed with a handshake.

According to Wyman, linear patterns from pre-Columbian cultures and the 1960s Op Art inspired him back then. He acknowledges Ramirez Vazquez as a genius, but says that no one will take back his ownership on the Mexico 68 design.

“I don’t wanna dirty this thing any more than it is because literally it’s been a real pain in the ass, and we all worked so well together, you know?” Wyman said.

1960s music set the mood at a party to celebrate 50 years since the Mexico City Olympics.

Carolina Borja is one of the organizers and the cultural director for the Route Of Friendship Board of Trustees, a nonprofit to preserve Mexico 68’s cultural program. And for her, the Mexico 68 design is product of a collective effort, and its legacy belongs to Mexico.

“When you work on a design lab, it’s not that you can own a part of it,” Borja said. “I think it should be a motivation for generations to come; it should stand more as an icon of what we were able to do as a country.”

Dr. Alderete said he knows both versions of the story and thinks both may be true.

“I just hope the situation gets solved, since, at the end, their work is a reference to Mexico and to the world,” Alderete said. For him, the main importance of the Mexico 68 design is its impact on the student movement of 1968, an event that can’t be forgotten.

Niemann, on the other hand, said that despite not knowing the whole story, he knows that efforts like creating an identity come from a collaboration and not necessarily from a “one-man genius.”

“I think that now is hopefully a good time to clarify that there’s a lot of people’s efforts that go into creating such a complex system,” said Niemann.

As part of the anniversary celebrations, Ramírez will offer conferences in Mexico City and Wyman at Arizona State University, and, so far, no activities together.