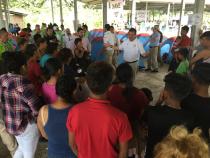 Instituto Nacional de Migración de México
Personnel from the National Immigration Institute of Mexico provide instructions to the migrant caravan in a shelter in Chiapas.

MEXICO CITY — Last weekend, thousands of Honduran migrants started to arrive to Mexico through Guatemala. Their goal? To reach the United States. But the uncertainty that comes ahead is concerning Mexican citizens and local nonprofit organizations.

Most of the Hondurans from the migrant caravan camp are in the southern state of Chiapas. Mexican authorities have been struggling to register the migrants and provide them a legal status as transitory migrants or refugees. Meanwhile, the migrants regrouped to depart to the U.S., while defining their next route.

“Several nonprofits like ours are working on a strategy and preparing the shelters in the capitol, there are two of them for foreign migrants,” said Guadalupe Chipole, coordinator of the Center for Support and Attention to Migrants, a nonprofit in Mexico City.

However, Chipole said the caravan will probably keep going up north and skip the city. According to her, the caravan might use six different routes to arrive to the United States, but there’s still uncertainty if the caravan splits or keeps walking together.

“The Mexican authorities need to work fast on a plan at the Northern states, where the U.S. border is,” Chipole said. “The last reports that I read speak of about 14,000 migrants, and that amount is uncontrollable.”

Chipole fears the caravan will face the same fate as the Haitian migrants there, who attempted to go to the U.S., but ended up staying as refugees in Mexico.

For her, the Mexican government has shown a lack of capacity to respond to the caravan’s arrival. The authorities should not be persuading migrants to desist, but rather help them on their way, she said.