Dorilocos And Diabetes: How Free Trade Has Affected Nutrition In Mexico

Download mp3 (5.03 MB)
Rodrigo Cervantes/KJZZ
The typical presentation of Dorilocos found in Mexico City, using the bag of Doritos as a bowl.

MEXICO CITY — Diabetes is the among the main causes of death in Mexico, and it falls just behind the U.S. in obesity, according to the World Organization of Economic Cooperation and Development.

Some researchers say this is a result on how global trade has modified food habits in Mexico and argue that nutrition should be addressed in the new U.S.-Mexico-Canada Trade Agreement (USMCA). Is this the case?

It takes one random, busy street in Mexico City to find something to eat: sweet fruit, fresh juices and, of course, traditional tortas, tamales and tacos.

But there’s also a lot of processed foods: chips, candies, sodas — and a certain snack, served inside a bag of Doritos used like a bowl.

“Dorilocos are kind of the best and the worst, ” said Alyshia Gálvez, a professor at Lehman College and a researcher about health and diet in Mexico. She’s the author of "Eating NAFTA: Trade, Food Policies and the Destruction of Mexico."

Gálvez thinks Dorilocos are, in a way, a metaphor of how healthy Mexican nutrition has been polluted with processed food brought by the North American Free Trade Agreement (NAFTA).

“Diabetes is a NAFTA sickness,” said Gálvez. “For many people in the United States, NAFTA has made our food healthier. For the Mexican population, NAFTA has increased the quantity of processed foods, industrialized foods, and it has also dramatically increased the amounts of meat that people eat.”

According to her research, sales of processed foods in Mexico grew by about 5 to 10 percent each year between 1995 to 2003, almost the entire first decade of NAFTA. For her, nutrition should be addressed in the discussions of the USMCA.

“We are not really represented at the table; in fact, these deals happen in the most part behind closed doors, while corporate interests are well represented,” Gálvez said.

The researcher stated that corporations and negotiators have preferred to blame the consumers, while the globalized culture has also favored processed foods.

Sergio Barajas is president of the Mexican Institute of Foreign Trade Executives. And for him, nutrimental problems don’t depend on treaties.

“I think it’s more of a cultural issue than a legislative one,” Barajas said. “What to buy is something that the consumer needs to decide, but it is important to provide the consumer with all the information they need in order to purchase a product.”

“There are, in fact, improved rules in a chapter of the new trade agreement on nutritional information labeling, something that NAFTA did not fully clarify before,” Barajas said.

The new rules established at the USMCA help consumers from all three countries receive the same nutritional information on details, like the number of calories in the foods they eat, for example.

“We need to be clear all the time that this (trade agreement) is an integrational process of the markets,” Barajas said. This means there's an increasing number of nutritious products for everyone.

“Some agricultural products have tripled, quadrupled and, in some cases, even quintupled their exports,” he said.

For example, Barajas says the U.S. gets from Mexico more and better avocados, while Mexico gets high-quality corn from the U.S.

“What needs to be done to reduce nutrition-related illnesses is a severe cultural shift, and it might take several generations to change it,” said Barajas.

Rodrigo Cervantes/KJZZ
Some of the ingredients used in Dorilocos, a mix of Doritos topped with fresh veggies, salsas and peanuts, among others.

Doctor María del Mar Aguirre works in a rowdy hospital. She is an expert in nutrition from the Mexican Diabetes Federation, and confirms that Mexico has a problem.

Diabetes has been the No. 1 cause of death among Mexican women and second among Mexican men for almost two decades, according to the Mexican Institute of Public Health.

Aguirre says several factors put Mexicans at risk for diabetes, including ethnicity, since Latinos are more likely to get the disease. And part of the problem is also the way food has changed with globalized processed foods.

“When we didn’t have this influence, our diet was based on plants, which are rich on fiber,” the doctor said.

Rodrigo Cervantes/KJZZ
María del Mar Aguirre is an expert in nutrition from the Mexican Diabetes Federation.

Aguirre says trade agreements should address health issues, but the problem comes mainly from culture and education. She says apples and bananas are as affordable and available as cakes or sodas — and way healthier.

“If we have this trade with the United States or with any other country, the options are there, but the thing is that we have to learn what to chose,” said Aguirre.

The doctor says it doesn’t matter if the agricultural products might look less appealing or with less quality: the nutrients are the same.

“We can eat an apple that maybe it’s not so red, but we will get the fiber, vitamins and sugar that will help us,” Aguirre said. “Here in Mexico we can decide to eat better. That’s the thing: we can decide. We are not doing it.”

And as for Dorilocos? Well, the doctor says it’s not the best choice, unless you get rid of the flours and saturated fats. 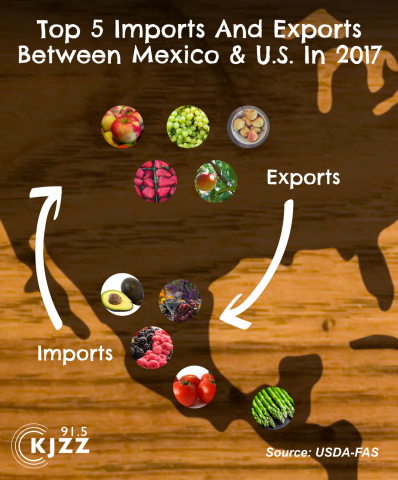