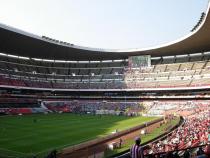 MEXICO CITY — The Los Angeles Rams and the Kansas City Chiefs were expected to play on Monday at the Aztec Stadium in Mexico City. But the field is damaged and the match cancelled — leaving local businesses concerned.

The Aztec Stadium has hosted eight NFL games, including the first international regular-season match in 2005, which featured the Arizona Cardinals. But this year’s game moved to Los Angeles after heavy rains, continuous concerts and poor maintenance left the grass ruined.

Nathan Poplawsky is president of Mexico City’s Chamber of Commerce. He says the cancellation will represent millions of dollars in losses.

“What we can not measure is the serious impact and damage to the image of our country,” said Poplawsky in a conference.

According to the chamber’s data, Mexico City received 31,000 visitors in 2016 for the NFL match. They spent about $43 million. Poplawsky said it is likely that most, if not all of the NFL tourists, will cancel their trip.

“We also expect a bigger damage through media exposure because, if I may say so, it’s going to be a hell of a game,” Poplawsky said.

In a statement, administrators of the Aztec Stadium regretted the situation apologizing with the fans, while promising to reimburse the tickets and to keep working with the NFL.