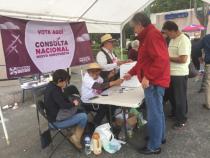 MEXICO CITY — In October, Mexico’s president-elect Andrés Manuel López Obrador called for a referendum to determine the fate of a new airport.

But the voting process was found to be flawed, with citizens able to vote multiple times at very few polling places, induced questions on the ballots and no official supervision. Still, the new government plans to hold more referendums like this.

The airport’s referendum result favored López Obrador’s proposal of canceling the construction of a new airport in Mexico City, and he promised to hold more referendums during his tenure, even despite the criticisms.

But the lack of transparency and formality of these referendums, as well as their utility, are concerning many.

“This is more a marketing tool and a marketing strategy,” said Sergio Bárcena, a political researcher at Tec de Monterrey in Mexico City. “It’s the way he (López Obrador) has built his image; and what he’s trying to state is that people have a voice and should have it directly, not through representative mechanisms.”

Bárcena explained referendums are not forbidden, but they are not formally included in the constitution. He said they might generate confusion not only internally, but also on a diplomatic level, as other countries, including the U.S., don’t know what to expect from the new administration.

“This adds up a certain level of uncertainty to the relationships in terms of economy and in terms of politics,” Bárcena said.

The referendum on Nov. 23-24 will address the construction of a new oil refinery in the Gulf of Mexico and a touristic train in the Mayan forests, which are also on the agenda of the new administration.

“A president is allowed to make decisions the way he wants to; however, what can be questioned is how open and how objective these processes can be, or if they are really giving the voice to the people or just justifying decisions already taken,” said Bárcena.

López Obrador’s inauguration will be held on Dec. 1.