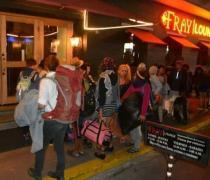 The first group of Central American migrants with the so-called migrant caravan has arrived at the Arizona border in Nogales, Sonora.

Many of the migrants in this group identify as LGBTQ, he says.

And the city is preparing for other members of the caravan to start showing up in the coming days.

“We’re from Nogales, we’re a border town and we’re accustomed to receive lots of people crossing the border every single day, so it’s nothing new to us,” he said.

In Tijuana, Mexico, people have protested the arrival of the migrant caravan. But Pujol says he doesn’t anticipate any issues in Nogales.

“We don’t think of it as a problem for the city of Nogales,” he said. “We’re not afraid. We’re not scared of the people coming over.”

On the other hand, he called U.S. efforts to fortify the border against migrants an intimidation tactic causing long lines at ports of entry.