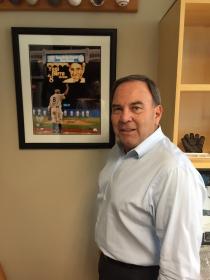 The Arizona Diamondbacks are bringing back one of the team’s early architects to the front office.

The son of baseball and broadcasting legend Joe Garagiola Sr., Junior is credited with helping to bring the franchise to the region, then building one of the most successful expansion teams in the history of pro sports, a Diamondbacks club that won a World Series in only its fourth season back in 2001.

A longtime Valley resident, Garagiola left the team in 2005 for a job as an MLB executive, where he’s been ever since.