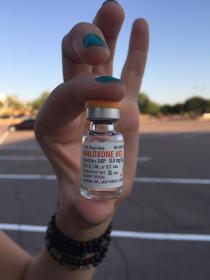 Will Stone/KJZZ
Naloxone is an opioid overdose reversal drug.

Naloxone, a medication that can quickly reverse opioid overdose, has saved tens of thousands of lives in the past two decades. But how soon after treatment should a patient be released?

A University of Buffalo study of more than 500 patients provides support for releasing Naloxone recipients one hour after arrival at an emergency department.

The research, which appears in the journal "Academic Emergency Medicine," seeks to establish more consistent guidelines by evaluating a one-hour rule established at St. Paul's Hospital in Vancouver, Canada.

Patients treated with Naloxone for suspected opioid overdose were evaluated within 40 minutes of arrival by ambulance, then observed for a minimum of four hours before being discharged.

The authors said subsequent adverse events were minor and unlikely to be life-threatening.