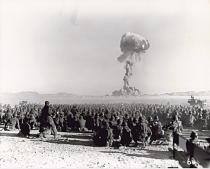 U.S. Department of Defense
Soldiers working near the Nevada test site and people who lived nearby as well as far away have suffered the impacts of radiation fallout.

Arizona Congressman Paul Gosar introduced a bill last week that would expand the Downwinders Compensation Act to include more people who suffered as a result of atomic bomb testing.

From 1945 to 1962 the federal government tested 200 atomic bombs. The nuclear fallout exposed thousands of people to cancer-causing ionized radiation. In 1990 Congress passed the Radiation Exposure Compensation Act to establish a trust fund for people commonly known as "Downwinders."

Rep. Gosar says there are serious boundary flaws that have prevented otherwise eligible people from receiving compensation, people who live in Mohave County, Arizona, and Clark County, Nevada, the closest counties to the testing ground near Las Vegas.

The bill would provide partial restitution to those victims, many of whom have already died. But family members told Gosar at a 2014 field hearing in Kingman they were still dealing with medical bills.