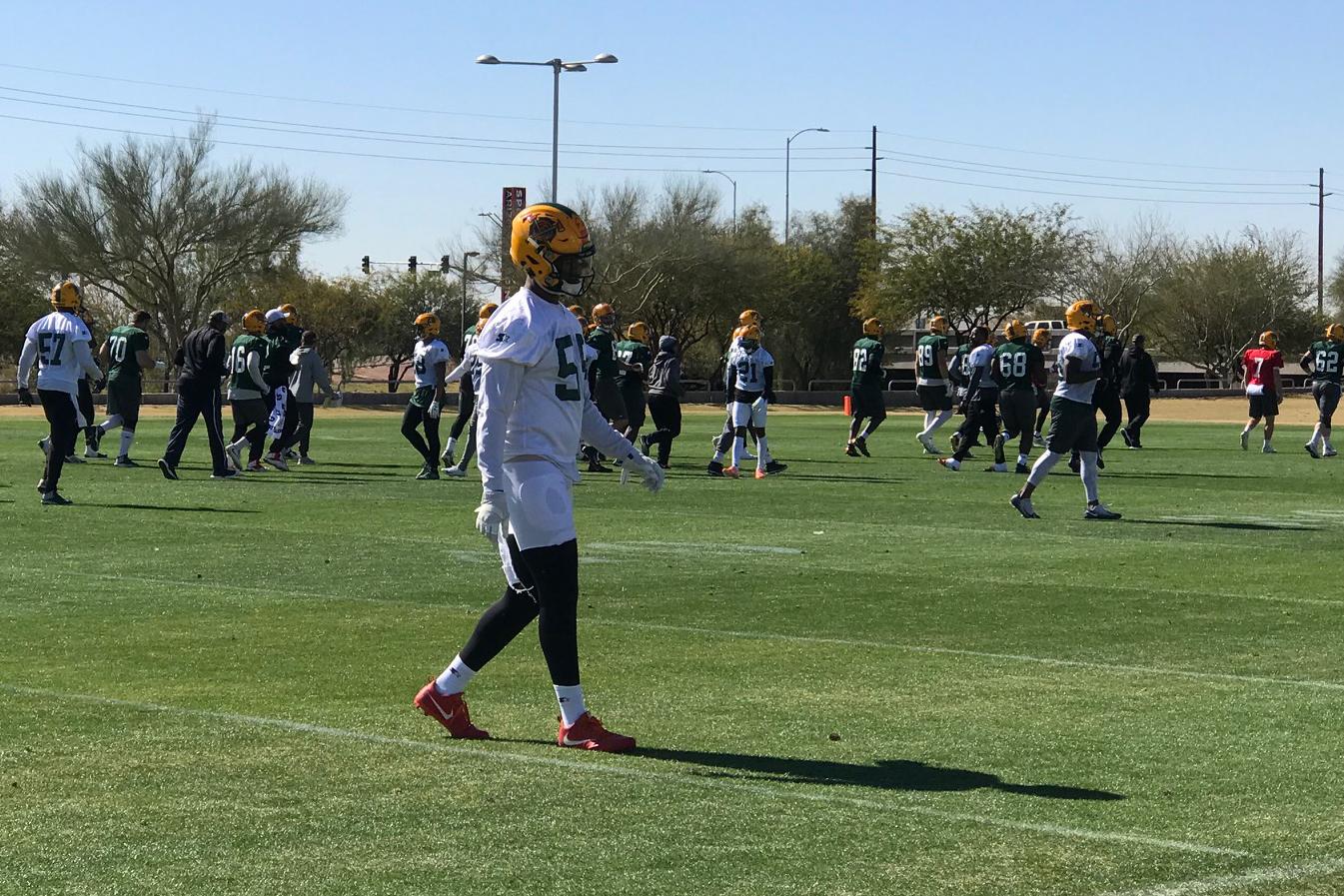 Phil Latzman/KJZZ
Arizona Hotshots on the field in February 2019.

The Hotshots is the moniker of 20 elite firefighters that battle the most dangerous blazes in the country. 19 of them from the Granite Mountain unit in Prescott, lost their lives fighting the Yarnell Hill Fire in 2013.

The team initially received some criticism for exploiting that sacred name.

“This was a decision made by the league. We were assigned our team names, our logos, our colors, all of that,” said Hotshots General Manager Phil Savage. “Obviously it was intended in an all-positive way. And it’s in total deference to what the Hotshots represent.”

Savage is a former NFL general manager with the Cleveland Browns, now in charge of building the Arizona entry, one of eight teams in the fledgling Alliance of American Football.

With that issue out of the way, he began building a team from scratch.

”The competition was very keen. People think, 'well God, if you're not in the NFL, you’re not a very good player," Savage said. "There’s actually very good players out there.”

Many players already here in the valley are looking for another chance to play in the pros, like Nick Dooley a long snapper from Scottsdale.

“I mean, this league is going to create a lot of great opportunity as far as getting fans — getting fans excited about football in the spring as well as bringing a championship to Arizona,” he said.

From unknown to savvy vet, former NFL kicker and University of Arizona graduate Nick Folk is also on the Hotshots roster. He senses an opportunity.

“Definitely, [there’s] a little ten week gap, a lull in football so to speak when you can only watch draft coverage so much — so I think we’re definitely filling a gap for the avid fan to keep their passion alive,” he said.

Guiding the ragtag bunch of 52 is another old hand from the neighborhood, former UCLA quarterback and coach Rick Neuheisel, a graduate of Tempe’s McClintock High School.

“I knew there were plenty of players and I also knew there were plenty of coaches. My phone rang off the hook when people knew that I was the new head coach of this deal,” Neuheisel said. “People want a chance to teach again — and this is the ultimate vehicle to teach because everyone wants to get to that next level. And we’re not making any bones about competing with the NFL — it’s a complementary league.”

That has been the mistake of other failed spring leagues of the past like the USFL and XFL.

A League Of Its Own

Neuheisel, who played quarterback more than three decades ago in the United States Football League insists the Alliance of American Football isn’t going to poke the bear — it will work with it as a conduit for players.

“Yeah, we were trying to get the Herschel Walkers and the Reggie Whites out of college back in those days. That’s not what we’re trying to do here.” Neuheisel said. “We’re trying to get the guys who are a year removed from their collegiate days and say ‘okay, you didn’t make the team, but you’ve still got a lot of juice in the tank. I think the NFL is gonna say ‘that guy can make my team’ and that’s exactly what we want to see.”

Players like Marquis Bundy who played his high school ball in Anthem, starred at the University of New Mexico and has had “cups of coffee” in the NFL, briefly on the rosters of the New York Giants and his hometown Cardinals.

“I feel like this is going to be the best thing for me because going in to those NFL training camps, I’ll be tip-top shape, NFL shape, game ready shape, day one, fresh out the season shape!” Bundy said.

And Phil Savage said that’s exactly the point of the new league.

“There are so many limitations in high school football, rules in place on practice in high school, college and the NFL," he said. "So guys can work out and lift and run all day long, but they don’t get a chance to actually play the game, and this is the opportunity they have here with the Alliance.”

But with studies showing the participation rate in football declining due to fears of concussions and other head injuries, Savage knows this league and the game will have to adapt.

“There are some risks involved, but they are risks involved in everything you do with safety being prominently featured now," Savage said. "Everyone has an idea of what the game needs to take place, not only to survive, but to thrive in the future.”

There are also noticeable rules changes — especially on special teams when it comes to kicking — such as no kickoffs. Each team starts the possession after a touchdown at their 25-yard line. Plus, two-point conversions only.

The play clock is just 35 seconds, five seconds less than the NFL. AAF officials said the alterations are intended to speed up the game to just two and a half hours, instead of the usual three or more.

It looks like it's so far so good for the Hotshots, who were picked as one of the league favorites.

They got off to a roaring start this past Saturday in Tempe by beating the Salt Lake Stallions, 38-22.

Although the team is not releasing attendance figures, an estimated 10,000 to 15,000 fans showed up to see their debut at Sun Devil Stadium.