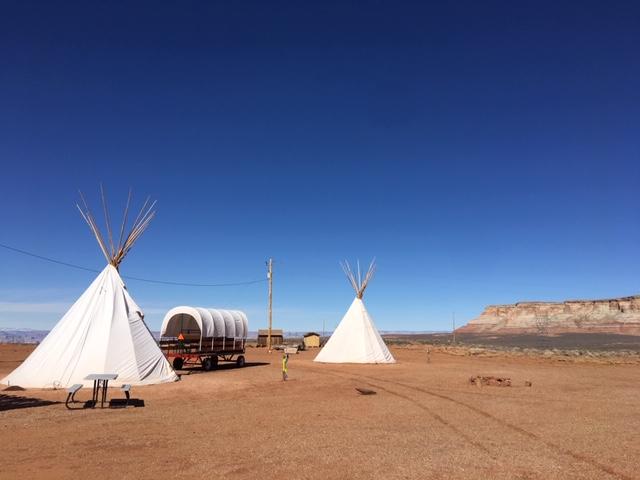 Laurel Morales/KJZZ
The Arrowhead Campground has two teepees, a modern hogan, showers, bathrooms, electricity and a wagon for tours.

For hundreds of years, monsoon storms have flooded the basin south of Page, carving hearts, waves and tear drops into the red Navajo sandstone. The slot canyons, as they're called, can only be accessed with a Navajo guide.

Lester and Roseann Littleman have permission to lead tours.

Lester has bolted guard rails and steps into the canyon walls. He recently retired from his welding job at the Kayenta Coal Mine, which feeds the Navajo Generating Station. Both facilities will likely shut down at the end of the year leaving about 800 people without jobs on the reservation. So the Littlemans and other Navajo are turning to tourism and other small businesses to make money.

Lester drives his Suburban over the rocky road back to a campground he's built for visitors, complete with teepees, showers, bathrooms and views. You can still see the plant's smokestacks from the edge of the canyon. 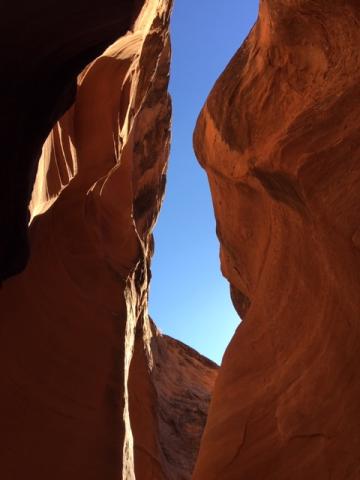 But starting a business on the Navajo Nation hasn't been easy.

"Tribal law is different," Littleman said. "It's not the same as out there, which you could get your business running within a month."

A Navajo business incubator called Change Labs has helped the Littlemans and other small business owners navigate the red tape.

Change Labs director Heather Fleming, who is half Navajo, studied product design at Stanford. Soon after graduating, she started her own business in less than 48 hours — something, she said, that's just not possible on the Navajo Nation.

"Change moves very slowly," Fleming said. "And I can argue the reservation hasn't changed at all since I left for college in 1998. And I can't imagine any entrepreneur building a business plan and presenting it to a bank to get access to a business loan saying, 'oh yeah, I'm going to have a business four years from now.' It depends."

About half of the tribe is unemployed. More than a third still live without electricity and running water. Internet is unreliable. Only 18 percent of the roads on the Navajo Nation are paved. Fleming said without a physical address, you can't really fill out the proper forms to start a business.

"I see an economy that's stuck in the flea markets and on the roadsides," Fleming said. "And I have to wonder if we created tools, spaces, could you create a new economy that is based on small, local, sustainable native-run businesses?"

A 2012 study released by the W.P. Carey School of Business from Arizona State University says the two operations would have a combined $518 million impact on the northeastern Arizona economy through 2020, if they remained open.

For the Navajo Nation, the two operations supply about $40 million a year to the Navajo General Fund, more than 20 percent of its revenue.

Change Labs has received a $1.2 million grant from the Kellogg Foundation and support from the National Endowment for the Arts and the Pakis Family Foundation to build a large Silicon Valley-style workspace in Tuba City that will provide laptops, business counselors, workshops on branding, social media and web design for people like the Littlemans. 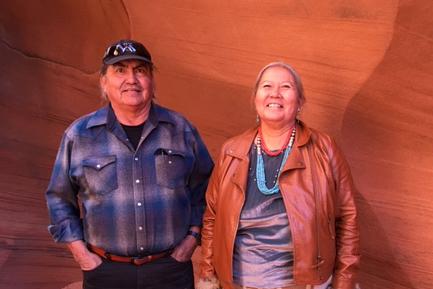 They also have a mobile unit that will travel across the vast reservation to offer similar services. Fleming hopes this will make a dent in the unemployment rate.

"I hope that when I walk in the doors there that I see studious people just hunched over laptops, people connecting," Fleming said. "I hope we see more high school students interested in entrepreneurship in college. I hope that we see more people inspired as to how one can take control of their situation."

Fleming envisions all this happening by the end of the summer. Then Change Labs plans to track entrepreneurs' progress to see if small businesses can actually fill the gap left by the coal industry.