“Rillito’s a good town, but it’s a forgotten town. It’s a good community. But if you on the freeway and you blink, and you driving by, you miss it,” said Robert Brown, a lifelong resident of Rillito, Arizona.

The community is adjacent to Interstate between the town of Marana and the city of Tucson. In the 1930s, it was a small Yaqui village of settlers from the bracero program, a guest worker program between the United States and Mexico during that time. In 1954, due to displacement by technology and discrimination, Rillito became home to a community of new families that remain today.

“So technology came about at the same time desegregation came about. Before, cotton was hand-picked, but then in 1954 with technology came the cotton-picking machines, so they didn’t need all the workers, but because of the school desegregation, a lot of these farmers were on the school board. And so they they were really upset about the integration part of it,” said Brown's aunt, Gertha Lee Brown-Hurd.

She has lived in Rillito since 1963. Before, she attended school in nearby Marana.

“When I first started school here in 1951, the school was segregated. We had our own school on the regular campus, but it was a separate building, altogether. So we couldn’t go to school with the white kids even though we were on the same grounds,” she said.

The 1954 landmark Supreme Court case Brown vs. Board of Education unanimously ruled racial segregation in schools as unconstitutional.

“Some of the farmers didn’t like it [integration], so they kicked all the people they had been housing off of their farms, so they had to find other places to stay. The farmers wouldn’t let them buy land in Marana. They didn’t want to sell any land to the blacks. That’s how people ended up here, because that’s the only place they could buy property,” said Brown-Hurd.

But owning property was only part of the battle. Brown-Hurd says when she moved to Rillito “there was no infrastructure at all,  no water, no electricity, no gas — nothin.”

Rillito is a designated colonia under the Arizona Department of Housing. Colonias are typically unincorporated settlements near the U.S.-Mexico border with low-quality housing and poor services. In Rillito, residents did not have access to their own water until 1978, when they got a grant to build their own well. 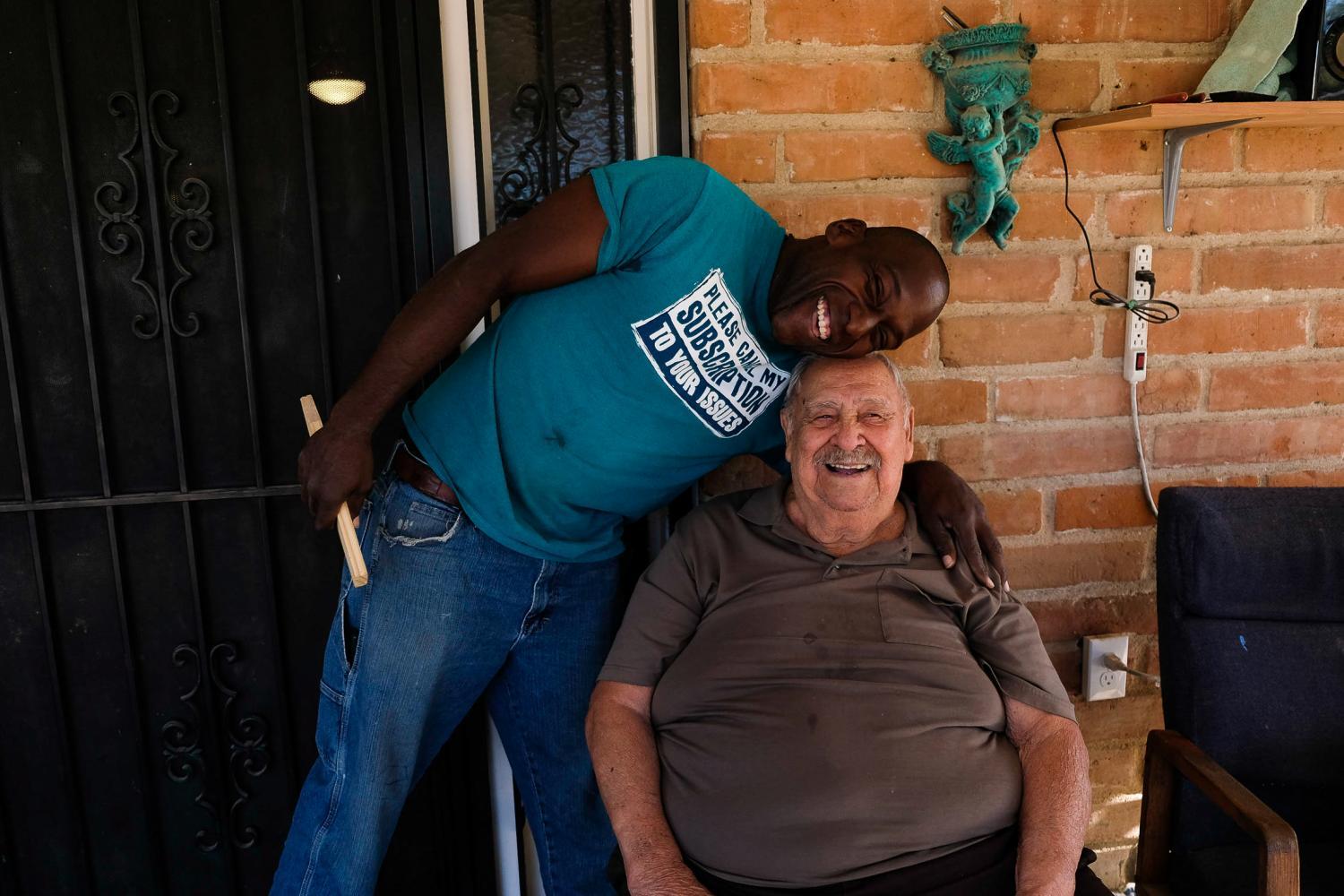 Chloe Jones/KJZZ
Armando Yrigolla (right) moved to Rillito in 1963. He poses with Robert Brown, who was born and raised in Rillito, Arizona. They say the community is like a family and looks out for each other.

Before 1978, they had to travel across the freeway to the Southern Pacific Railroad water tower and bring water back to their community. Today, they get their electricity from the city of Tucson and their sewage disposal through the town of Marana.

Under the National Affordable Housing Act of 1990, border states have to set aside 10 percent of allocated funds from the U.S. Department of Housing and Urban Development for colonias. For a community to qualify for these funds, it must be located within 150 miles of the U.S.-Mexico border and outside any metropolitan area and meet other infrastructural and administrative requirements.

Daniel Tylutki, senior program manager for community development and neighborhood conservation for Pima County, says although colonias have a right to these funds, the application process to receive them can take about a year to be approved. He says it would be great if the process were less arduous, but that the state has to meet federal requirements.

“There are colonias out there that aren’t certified with the state that exist. And in my opinion, those communities don’t even have the capacity to become eligible for funding because the requirements are what they are,” said Tylutki.

Pima County tore down the community rec center in the early 2000s and replaced it with a park. The county said the cost to maintain the facility wasn’t sustainable, but according to a 1998 article from a local newspaper and many Rillito residents, this rec center was the heart of the community. They held meetings and other community events there. Although the county maintains the park, many residents say they wish they had a meeting place. TOP: Gertha Lee Brown-Hurd has lived in Rillito since 1963. LEFT: Rillito resident Gloria Taylor's grandchildren play in her front yard. RIGHT: The streets in Rillito are named after the original families that founded the community. The majority of the families still live there. Miranda Cyr

One of Rillito’s few neighbors is the CalPortland Cement. It’s located directly behind the community, but the relationship between the company and Rillito is deeper than just the location. CalPortland has donated cement and volunteers to numerous community development projects. In the 1990s, they began giving toys to the children and gift cards to the families for Christmas. This became a tradition that happens every year.

“We always have an open door to members of the community if they want to come in and talk to the plant management. We try to be a good neighbor,” said  Steve Regis, senior vice president of the company. He has worked for CalPortland since 1979 and worked at the Rillito plant for seven years in the 1990s.

Back in Rillito, Brown is building a miniature golf course for kids and adults alike and he hopes to develop a recycling center so that the community can sustain itself.

“My grandparents and parents laid the roots down for me and I’m not gonna give up on it. It makes no sense for them to start something and us not finish it,” said Brown.

Gertha got an undergraduate degree at University of Arizona and graduate degree in social work at Arizona State University and is now a leader in the community responsible for getting funding from the county. Despite living in cities with modern conveniences, like Phoenix and Tucson, she still returned to Rillito. 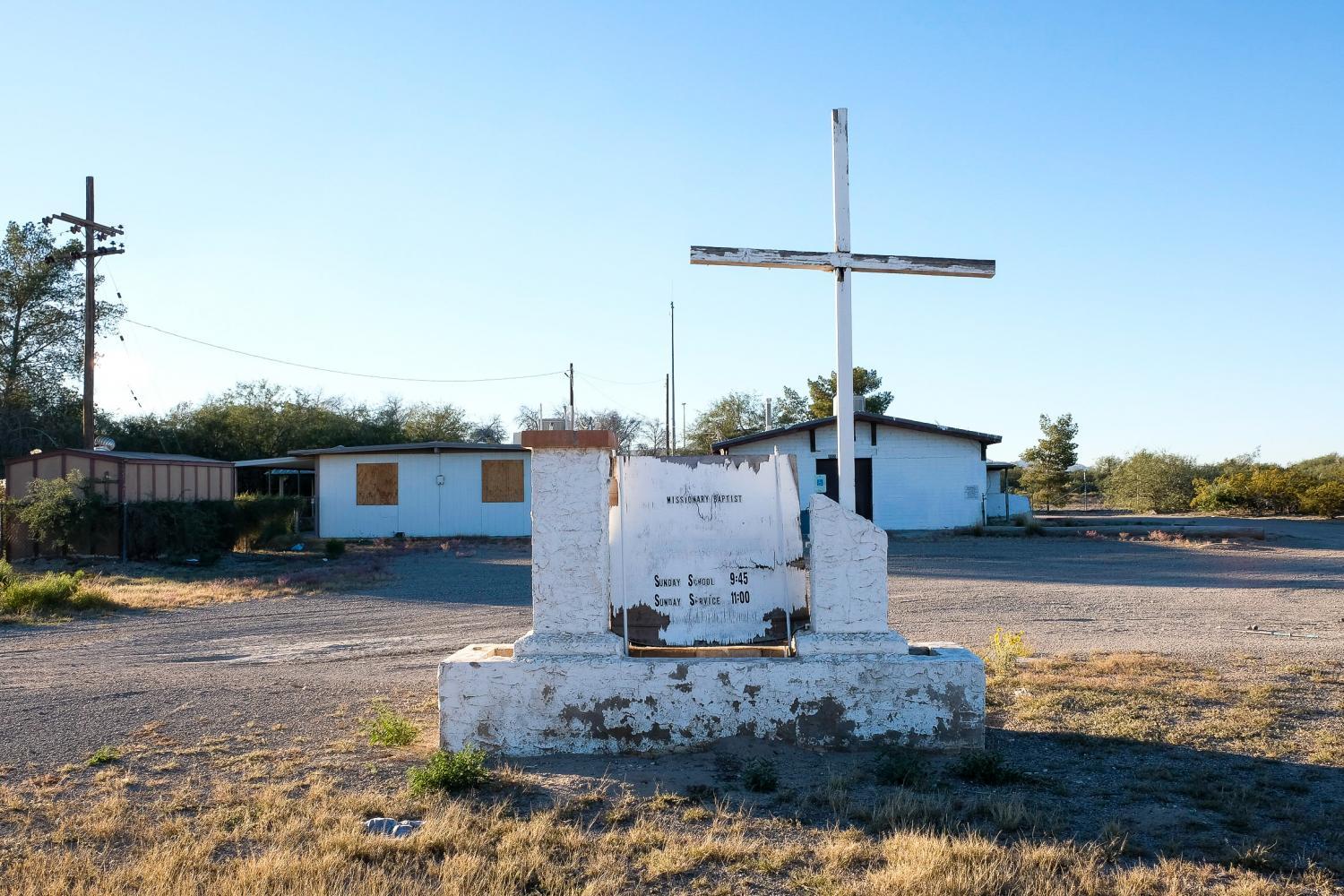 Chloe Jones/KJZZ
The abandoned Baptist church in Rillito, Arizona. According to residents, services at the church stopped after the pastor passed away.

“I’m a country girl, you know just straight out of the country. I like living out in the open, I don’t like, the houses are too close together in Tucson, you have no yard space, you can’t go out and sit here. I can go out and I can see the stars at night. I got the mountain ranges, we’ve got beautiful sunsets, you know, you can’t beat it,”  Brown-Hurd said with a big smile.

Roads need pavement, streets need lights and abandoned houses need to be cleaned up, but to the families that live there, Rillito is home. 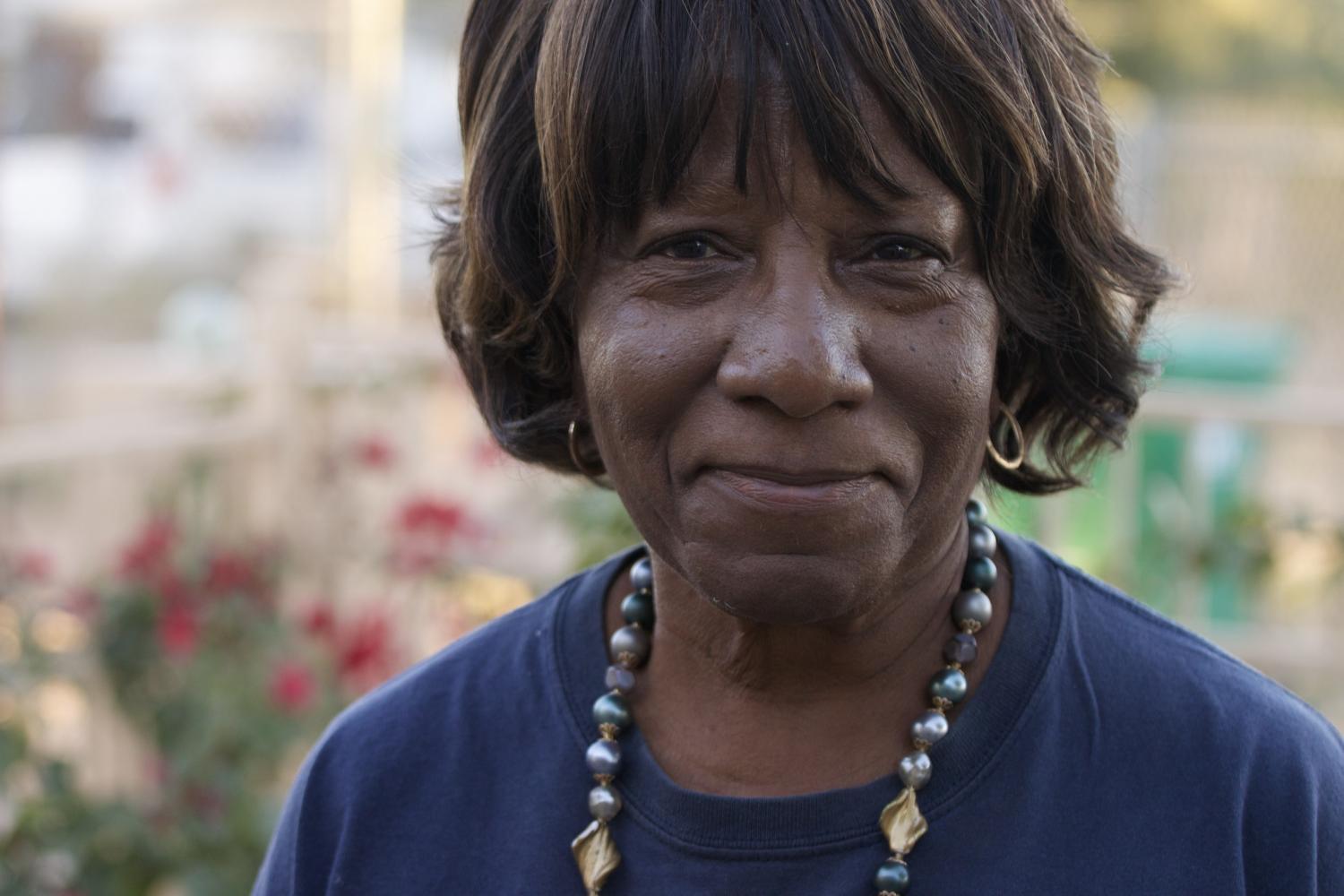 Miranda Cyr
Gertha Lee Brown-Hurd has lived in Rillito since 1963. She is the bridge between the community and the county, working hard to get grants and funding to help the town. 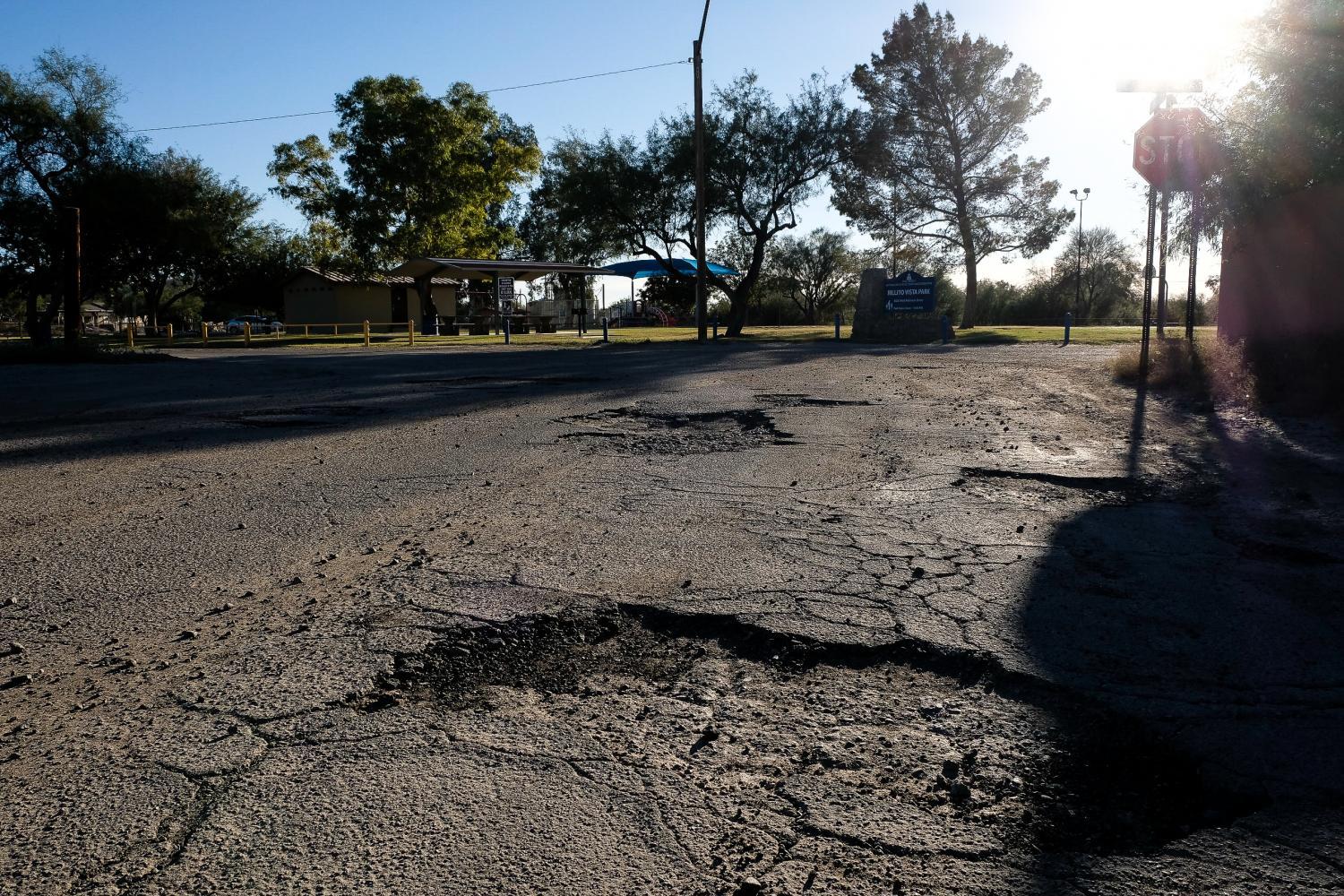 Chloe Jones/KJZZ
The entrance of Rillito is lined with potholes and leads to a well-kept park. The park is maintained by Pima County. 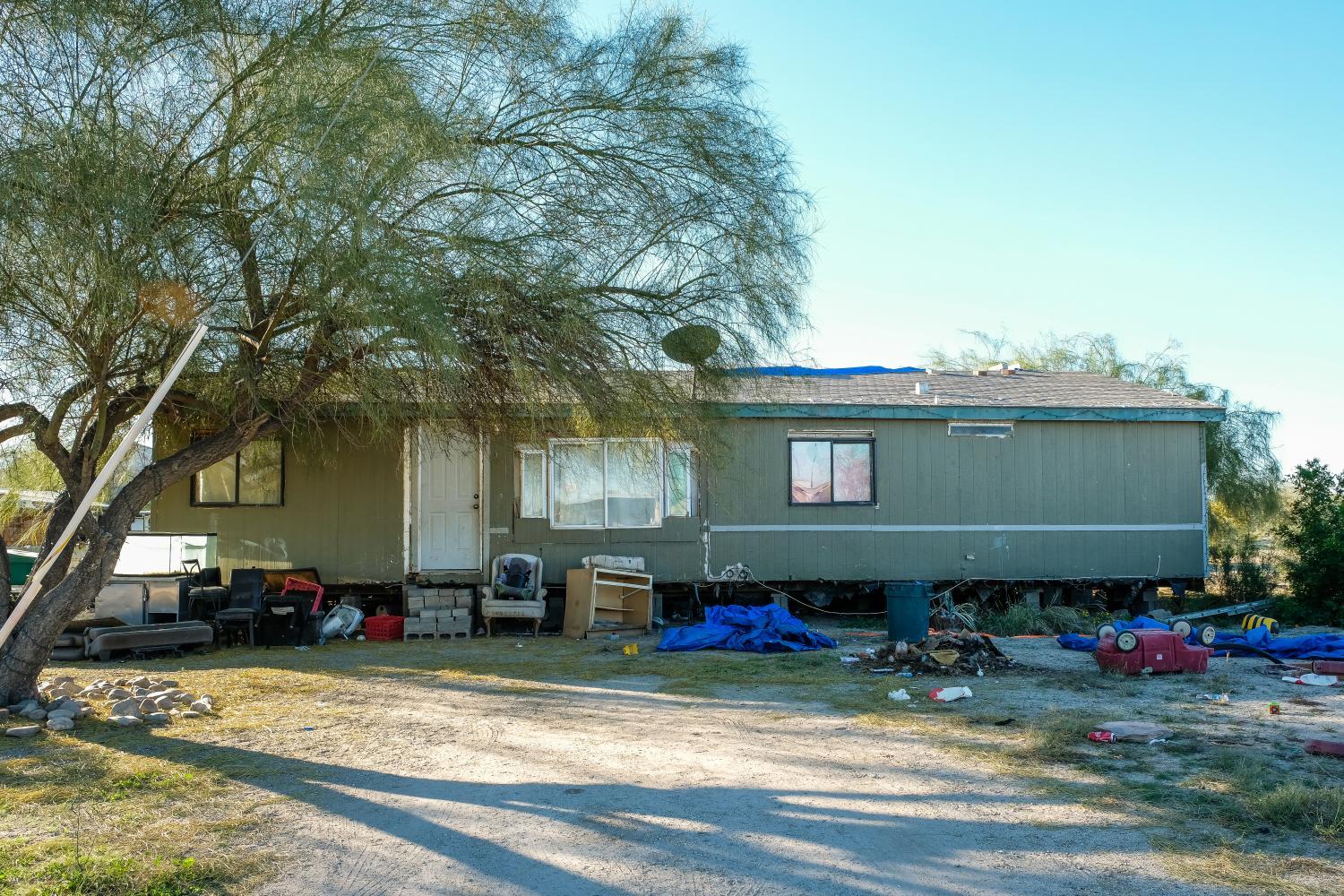 Chloe Jones/KJZZ
A home for a family of five in Rillito, Arizona. 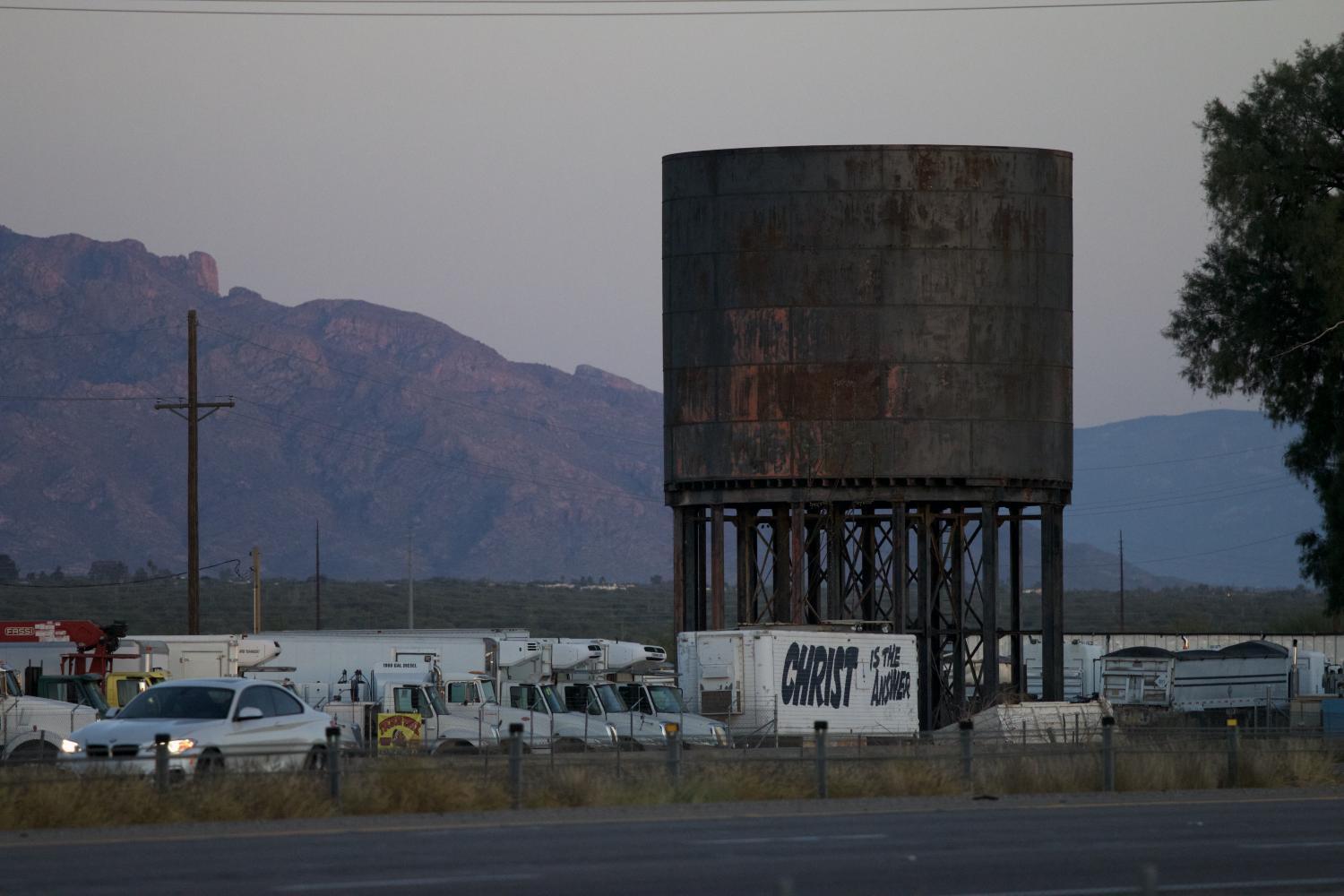 Miranda Cy
Before 1978, residents of Rillito had to travel across the freeway to the Southern Pacific Railroad Water Tower and bring water back to their community, 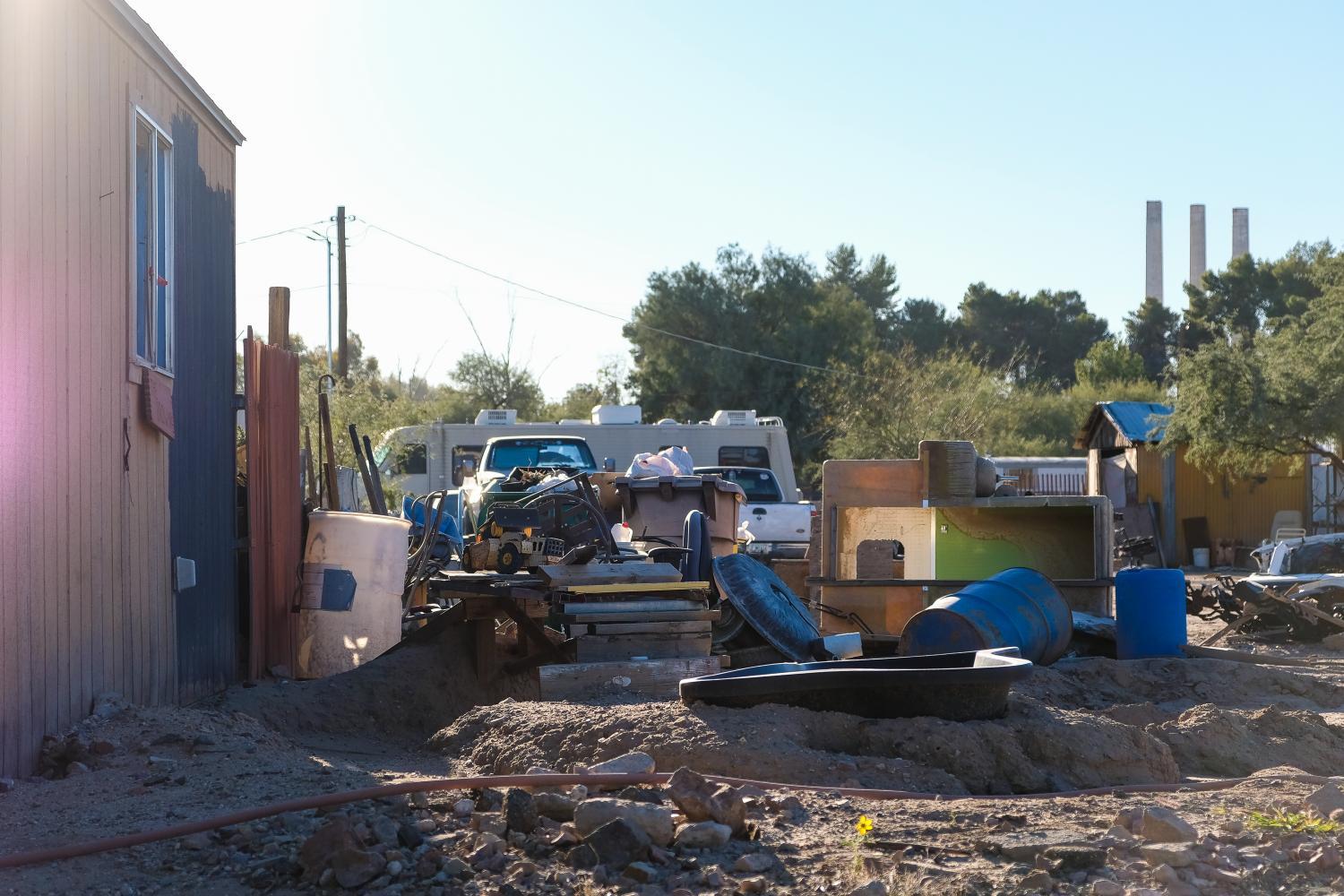 Chloe Jones/KJZZ
Many homes in Rillito, Arizona, are adjacent to piles of trash. 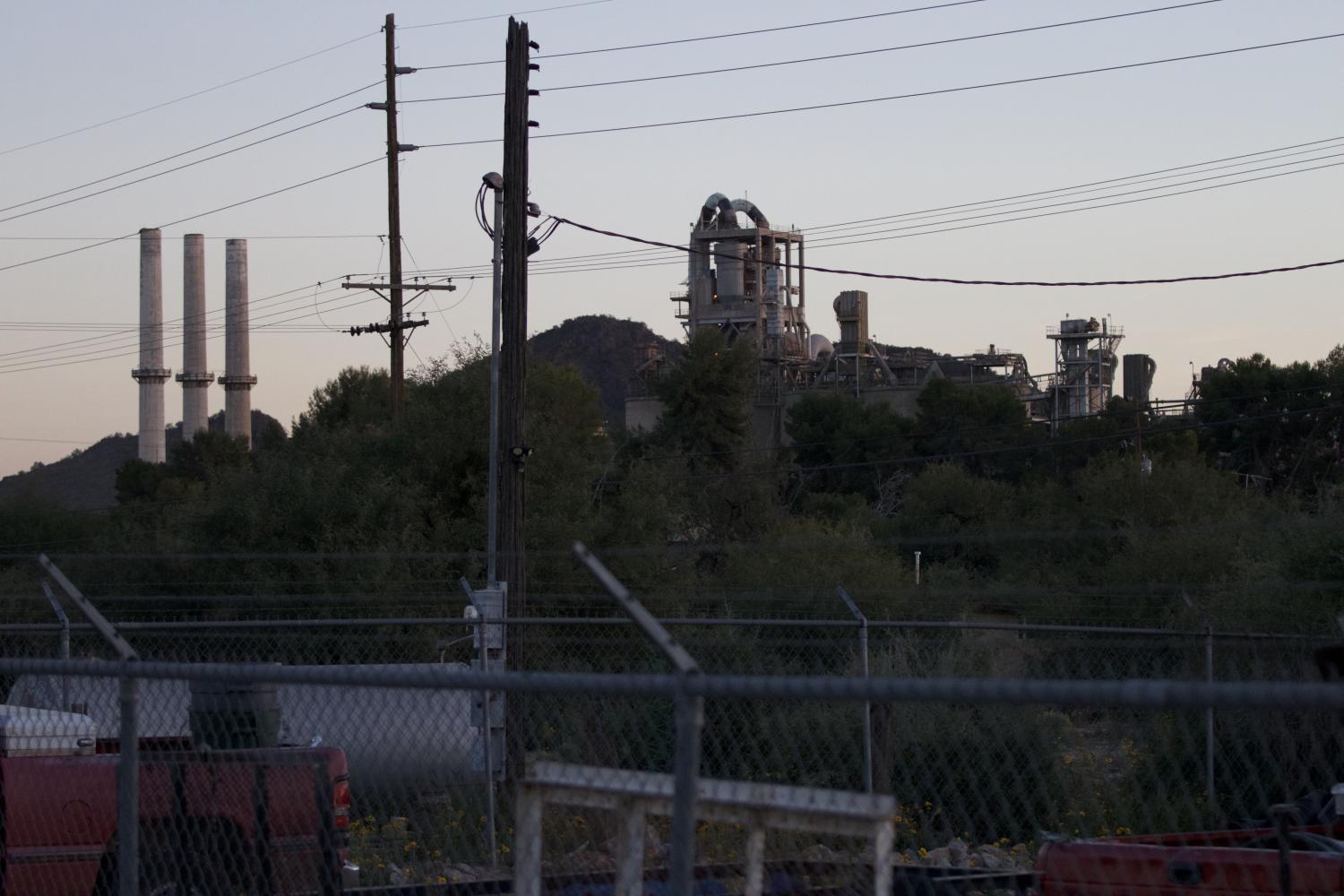 Miranda Cyr
CalPortland Cement is located directly behind Rillito, Arizona.. They often donate labor and supplies to community development projects and donate Christmas gifts to children and families each year. 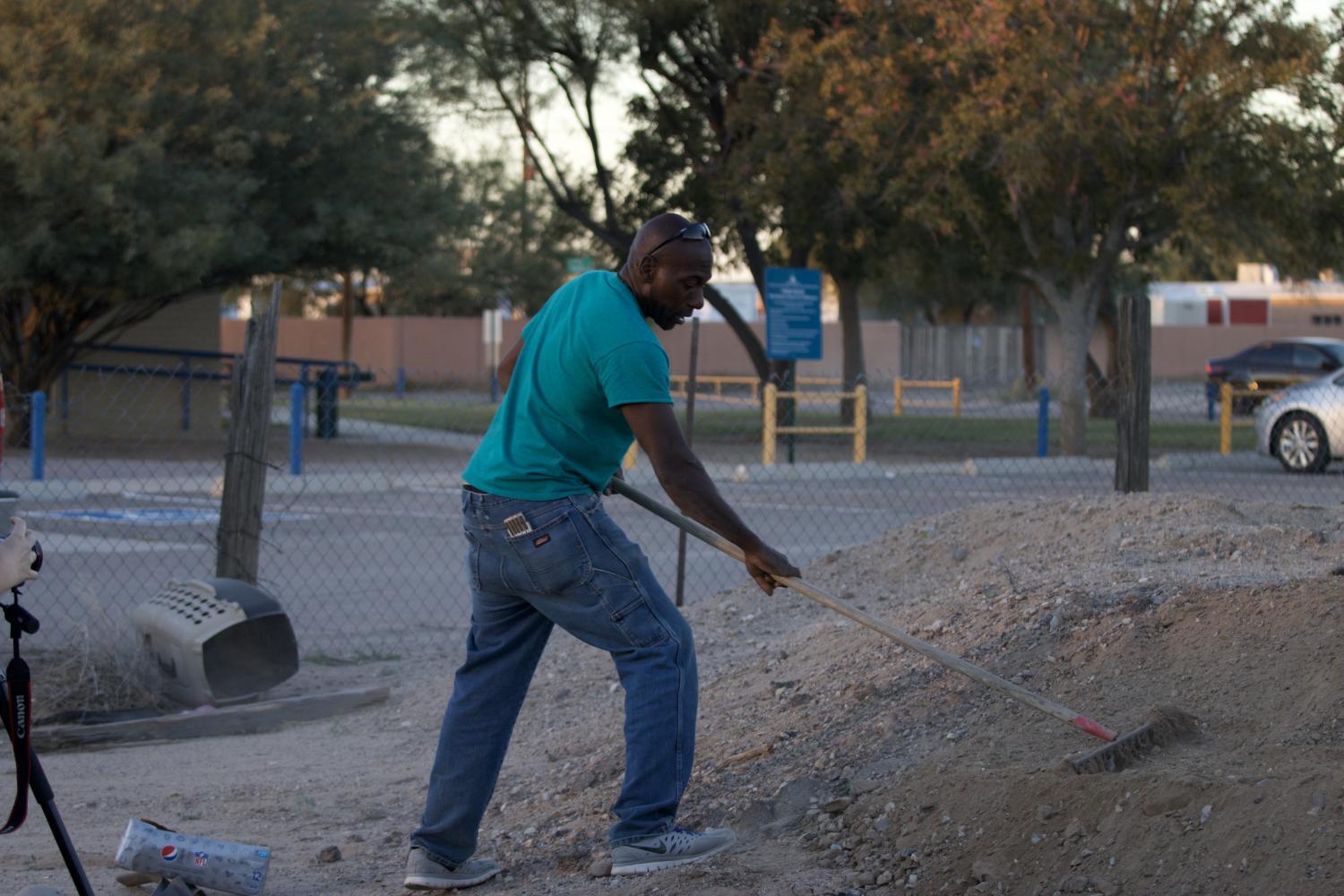 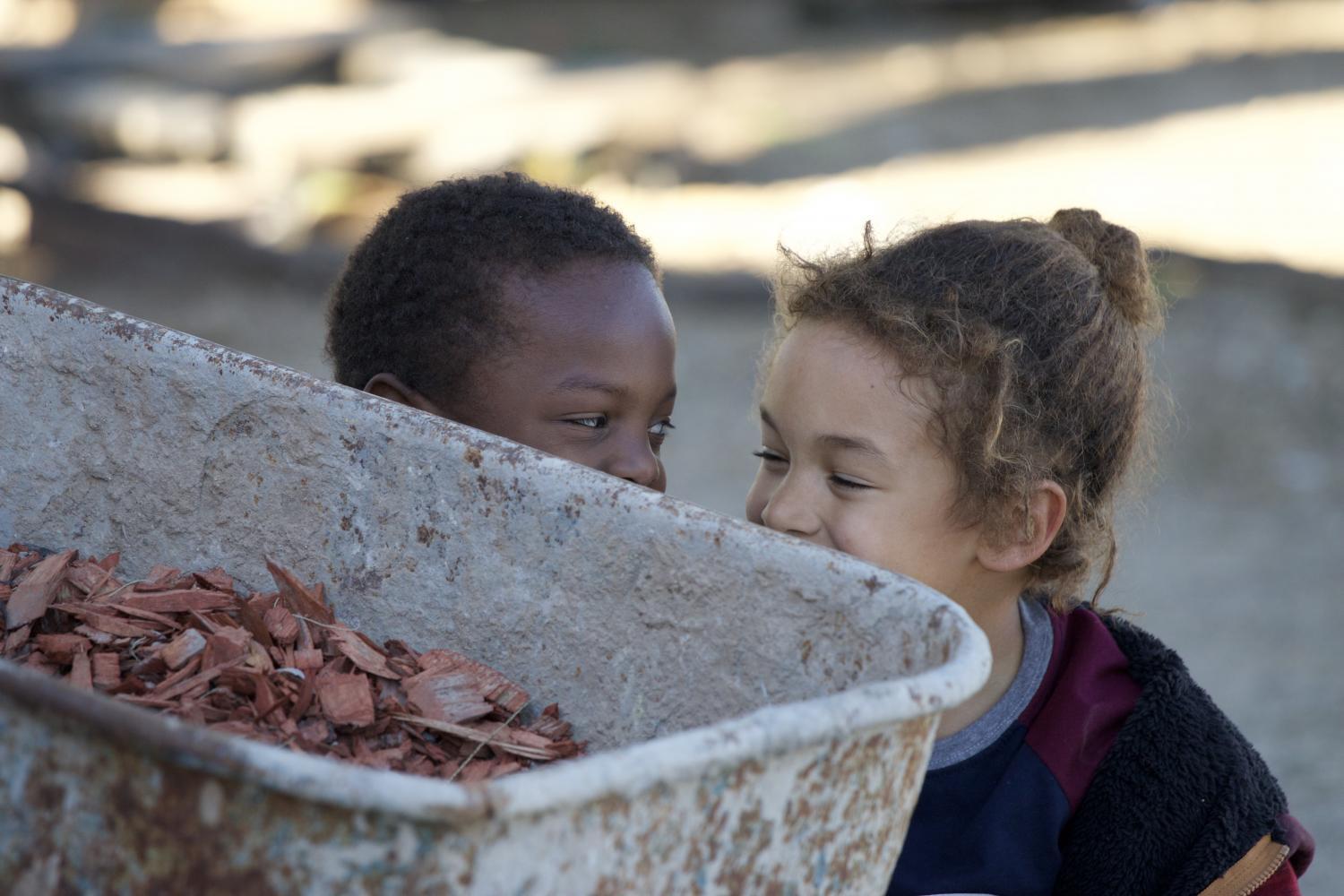 Miranda Cyr
Gloria Taylor's grandchildren play in her front yard regularly. Taylor lives in the house she grew up in and continues to have her kids and grand kids over for reunions.