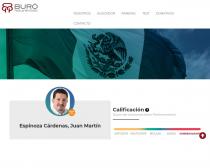 MEXICO CITY — In 2021, Mexico will allow congress re-elections for the first time in nearly a century. With that in mind, two Mexican entrepreneurs developed a tool to monitor legislators: an instrument that they hope will empower democracy in Mexico and in other parts of the world.

The re-elections in Mexico will be limited to the Congress, but give Mexican voters a new responsibility, said Sergio Bárcena, a political researcher.

“We are about to see the most important midterm election that a president has ever faced,” Bárcena said.

Mexico’s ruling party gained an absolute majority after last year’s elections. Bárcena explained the midterms in 2021 could bring a more balanced Congress or, instead, give the president enough power to significantly reform the constitution.

And to help Mexicans decide, Bárcena and his partner started Buró Parlamentario, a web-based platform that allows citizens to monitor legislators.

“The vast majority of Mexicans, 7 out of 10, don’t know who their congress representative is,” said Paco Méndez, co-founder of Buró Parlamentario. And Bárcena and Méndez want to change that.

“Our platform’s ultimate goal is to promote a reasoned vote,” Méndez said.

The platform scores legislators with variables such as attendance, legislative projects or impact of their decisions.

"Well, given that the legislators are in service of the nation, I think it is important to know who our legislators are; who are the people being payed with my taxes,” Méndez said.

Buró Parlamentario is currently collecting funds to expand into smartphones, as well as to other markets.