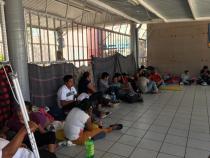 Well-known migrant shelters in Nogales, Sonora, have been filled to capacity in recent weeks as a growing number of migrants arrive looking for a place to stay, said the city’s public safety coordinator César Gómez Madrid.

"They're there waiting for their turn on the list to be able to enter and be processed in the United States," he said, referring to the wait at the port of entry for migrants to be processed by U.S. Customs and Border Protection.

Most of the migrants, he said, are Mexican and Central American asylum seekers.

Now, with wait times getting longer and temperatures dropping below freezing in Nogales, the city opened a new shelter and started taking in families this week, he said.

The migrant advocacy group Kino Border Initiative has also been serving three rounds of breakfast instead of one at their soup kitchen, or comedor, in Nogales, Sonora, said spokeswoman Joanna Williams.

Williams said there are now nearly 300 asylum seekers waiting as long as 20 days to be processed by CBP, adding that customs officers in Nogales process 8-10 migrants per day on average.

Right now, about half of the migrants at the comedor are coming from southern Mexico, mostly from the Mexican state of Guerrero, Williams said, and other half are from Central America, especially Honduras and Guatemala. She said many have re-routed to Nogales after hearing about problems in other border cities, such as Tijuana, Coahuila or Piedras Negras.