Sonoran AG: Reporters Were Not Intended Targets Of Armed Attack 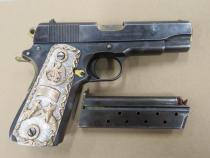 Courtesy Sonoran Attorney General's Office
This .38 caliber handgun is suspected of having been used in the attack against Hermosillo reporters Reynaldo Lopez and Carlos Cota.

A case of mistaken identity was what led to the tragedy last Saturday, which claimed the life of radio announcer Reynaldo Lopez. Sports reporter Carlos Cota remains in critical condition.

“It was definitely confusion,” Sonora Attorney General Claudia Indira Contreras said at a press conference Thursday afternoon. Lopez and Cota were driving in a car that looked similar to the vehicle the shooters were after, according to her office.

Authorities have arrested seven people, three of whom were directly involved in the fatal incident, according to the AG. They also seized several vehicles, drugs, a weapon suspected of being used in the shooting, as well as additional ammunition and a fragmentation grenade.

Contreras’ office had been criticized for so quickly discounting the possibility of a link between the reporters’ work and the attack.