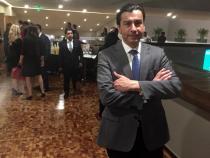 Rodrigo Cervantes/KJZZ
Marco Lopez, an Arizonan politician and business leader, during a visit to Mexico City in February 2019.

MEXICO CITY — A one-of-its-kind customs project to speed deliveries from Mesa airport to Mexico is — literally — taking off. The project is called SkyBridge, and it was was created by Mesa officials and business developers, along with their Mexican counterparts.

Marco Lopez is one of the strategists and main promoters behind SkyBridge, and says the main goal is to shorten shipping times.

“This basically shaves off days, maybe a week and a half in time,” said Lopez.

Lopez explains products are cleared at Mesa airport by Mexican customs officials. The first cargo was sent a couple of weeks ago: an e-commerce purchase of Peloton bikes heading to Hermosillo.

“This then means that any cargo that’s cleared in customs could basically go to hundreds of airports anywhere in Mexico, so that’s what made it unique,” said Lopez.

The second phase of SkyBridge will have US customs officers in Mexico pre-clearing goods at the Silao airport, in the central state of Guanajuato.