On Pluto And Charon, Evidence For A Kinder, Gentler Kuiper Belt 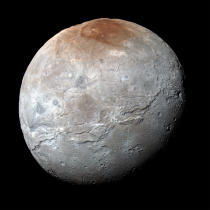 NASA/JHUAPL/SwRI
The study relied heavily on the craters of Charon's southern half, known as Vulcan Planitia. Unlike Pluto, Charon has been geologically inactive.

A belt of ice and rock beyond Neptune could retain traces of our solar system's formative years, but most of its objects are too distant, and too small, to observe from Earth.

Now, a novel approach uses data from the New Horizons spacecraft to fill in the blanks.

The study appears in the journal "Science."

Like spymasters inferring troop actions from satellite photos, astronomers have used images of craters on Pluto and its moon Charon to estimate activity in the Kuiper Belt, of which they are a part.

Different models of how the belt formed predict either energetic smashing — which would blast away more small objects, like space shrapnel — or a more pristine, peaceful dance governed by milder interactions.

Either answer would offer essential insights into the formation and history of our solar system. Such information could also inform our understanding of planetary formation around distant stars.

After accounting for geological processes that might have resurfaced the dwarf planet and its moon, the scientists found a relative lack of small craters (measuring less than around 8 miles, or 13 kilometers). This, in turn, suggests a lack of small Kuiper belt objects.

"The surprising result was that there aren't that many small craters on Charon. There's a real deficit of little guys, and that translates to a deficit of little objects in the Kuiper Belt," said co-author Will Grundy of Lowell Observatory, who also serves on the New Horizons team.

That suggests fewer collisions, which could explain why delicate arrangements such as binary systems survive in the belt.