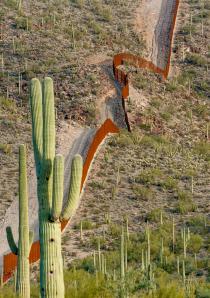 All along the border from the Pacific Ocean to the Gulf of Mexico, scientists and citizen scientists can use an online platform called iNaturalist, or Naturalista in Mexico, to document plant and animal life on both sides of the U.S.-Mexico border this weekend.

The second annual Border BioBlitz is designed to collect missing data about this region, said Ben Wilder, the director of Next Generation Sonoran Desert Researchers, which is hosting the event. The blitz is also meant to bring awareness to a misunderstood region, he said.

“It’s getting out there and collecting objective data for the actual line that’s in every headline that you read these days," Wilder said.

The BioBlitz is one way to share the message that the border isn’t a barren wasteland, but an incredibly biodiverse region that needs protecting, he said.

Anyone is welcome to participate in the Border BioBlitz by joining an existing team or creating their own, Wilder added. To sign up, visit http://nextgensd.com/border/border-bioblitz-2019/