Volunteer: Some Migrants Turned Away From Greyhound Bus Station 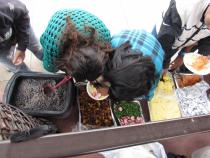 A volunteer helping newly released migrants taken to the Phoenix Greyhound bus station says some migrants were turned away Friday morning because the station’s manager capped how long people can wait inside the terminal.

Aid workers set up a buffet for the migrants on the bench of a nearby city bus stop. As cars whipped past and jets flew low, people filled paper plates with eggs, rice, beans, potatoes, tortillas and fruit. Then vans arrived to take migrants to a shelter.

Volunteer Barbara Lewkowitz said the manager of the Phoenix Greyhound station told her that only people scheduled to leave on buses within four-six hours are allowed inside the terminal.

“Unless we do something about keeping them safe, warm, clean, fed, it’s going to be a matter of having people be homeless on the streets,” she said.

In an email, a Greyhound spokeswoman Crystal Booker said bus stations are not designed for long-term stays, and the limit on how long people can wait there applies to all customers.

Booker also said Greyhound has worked hard in recent days to help migrants sent there by U.S. Immigration and Customs Enforcement. The company asks travel plans be made before coming to the station, or right when people get there.