Is Venezuela An Apple Of Discord Between Mexico And The United States? 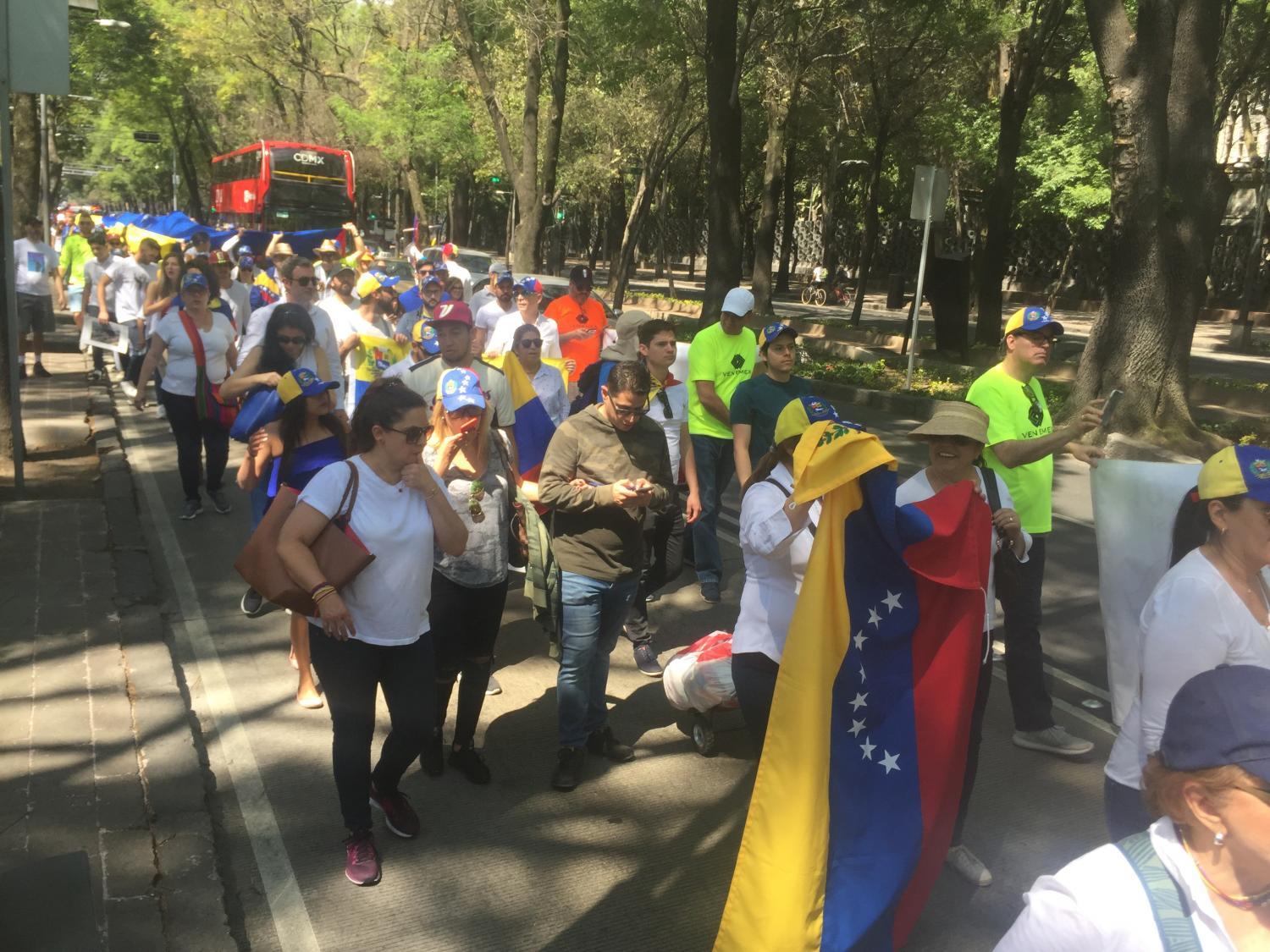 MEXICO CITY — The U.S. and Mexico have become the promised land for many Venezuelans escaping from their current government.

But when the political and humanitarian crisis escalated in the South American nation, Mexico and the U.S. faced off with different diplomatic approaches.

And as the United States supported a change of government, Mexico decided to stay neutral, cultivating divided opinions across the region.

Immigrants And Refugees In Mexico

During lunch time in Mexico City, tasty Venezuelan dishes arrive to the tables of Órale Arepa. Luis Rojas manages the restaurant, which has an unbeatable location for its clientele. 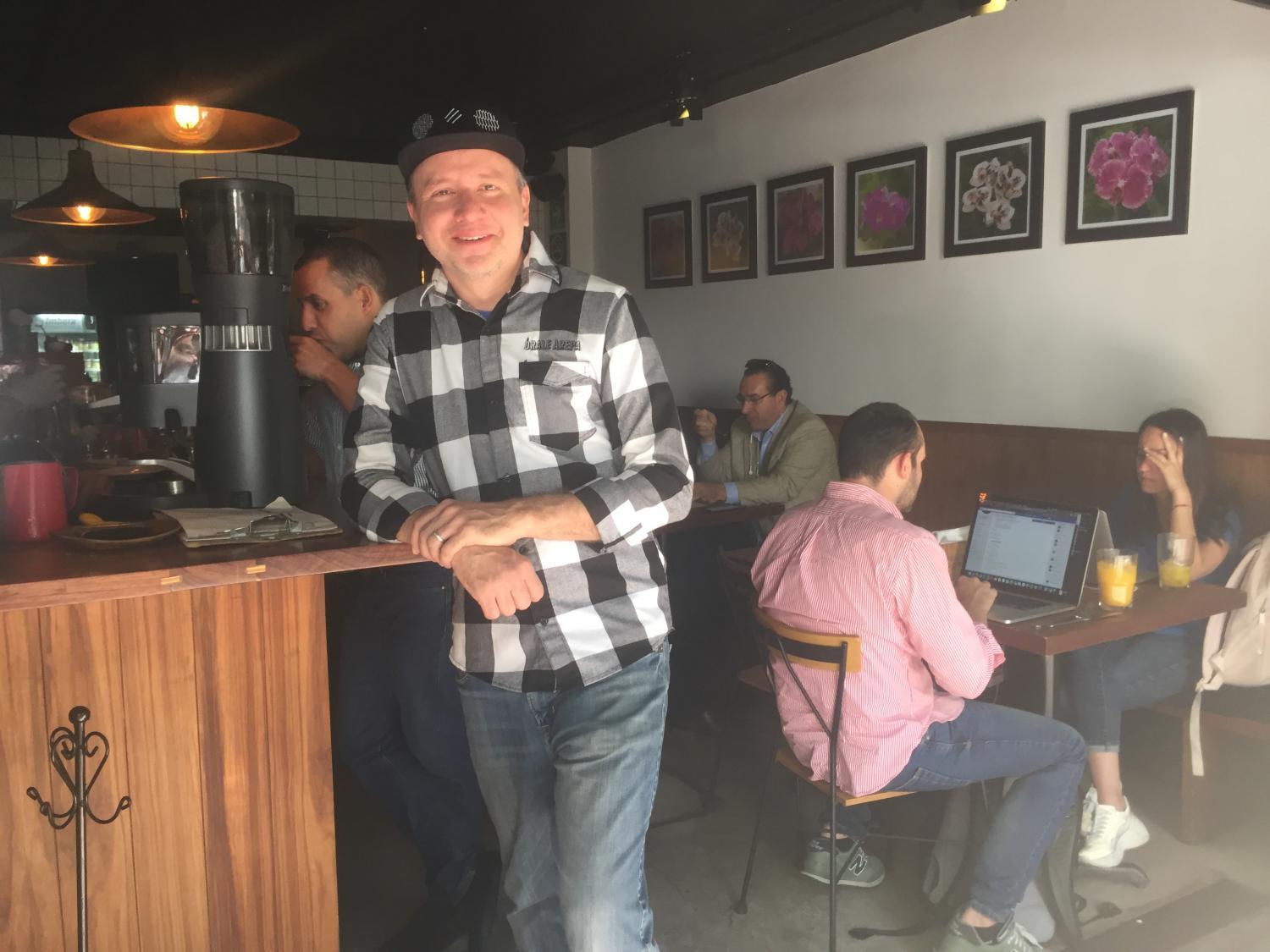 “Next to the Venezuelan embassy. And I think it’s working pretty good!” Rojas said. He moved from his homeland five years ago to the country where his family lives now.

“We live here in Mexico like we used to do in the 90’s in Venezuela, so we feel very comfortable here,” Rojas said.

According to the restaurant manager, more Venezuelans have moved to Mexico with President Nicolás Maduro in power. He can tell from the growing lines of people outside the embassy.

The Venezuelan embassy declined a request for an interview, but data from the Mexican government show that Rojas might be right.

The largest group of foreigners in Mexico requesting or renewing residence cards in 2018 were from Venezuela — almost 20,000 people. And 73 percent of resident refugees in Mexico come from that nation, followed by Salvadorans and Hondurans.

“People don’t believe it, but there’s no food, no security — basic things, that you take for granted, we don’t have them in Venezuela,” Rojas said.

“I have to be honest: when [Trump] was elected, I wasn’t happy at all. Now, I have to say that maybe I was a bit wrong, because he’s taking Venezuela’s situation seriously. Nobody did that before,” Rojas said.

And while Rojas is happy in Mexico, he’s disappointed with the government’s neutrality.

“What I would like from Mexico is to change their mind and help us a little bit, you know? To get involved,” Rojas said.

Mexican president Andrés Manuel López Obrador — or AMLO — stated that Mexico would support a peaceful, negotiated solution in Venezuela, following the principle of non-interventionism and self-determination of the nations.

But not everyone in Mexico agrees.

“I don’t think that’s a good idea. I don’t think it’s going to be of any help,” said Macario Schettino, an analyst and researcher at the Tec de Monterrey college in Mexico City.

As an attempt to help the situation in Venezuela, Mexico and Uruguay celebrated an international summit in Montevideo in February. But only some Caribbean nations participated — and neither side of the Venezuelan conflict.

Schettino said AMLO tries to emulate a Mexico from the past century, closer to Latin America than to the United States.

“He thinks that by defending the autocrats of Bolivia, Venezuela and Nicaragua he's going to separate from the U.S.,” Shettino said.

Critics like Schettino see Mexico’s position as lukewarm or even as a pat on Maduro’s back. But many others applaud it, considering it righteous — or even brave — to push against U.S. domination.

“Why did Mexico take that stand? To appeal to what they consider left here in Mexico, to a certain segment that questions whether Venezuela is really that bad off,” explained Amy Glover, an analyst and CEO of Speyside, a public affairs consulting firm.

According to her, Mexico took a rhetorical stance similar to the one with Cuba, in which it kept its relationship despite the U.S. embargo. And she thinks Mexico and the U.S. probably had a conversation to agree on their stances before going public.

“And the less said, the better, publicly. I have a feeling that’s what was ironed out,” Golver said. 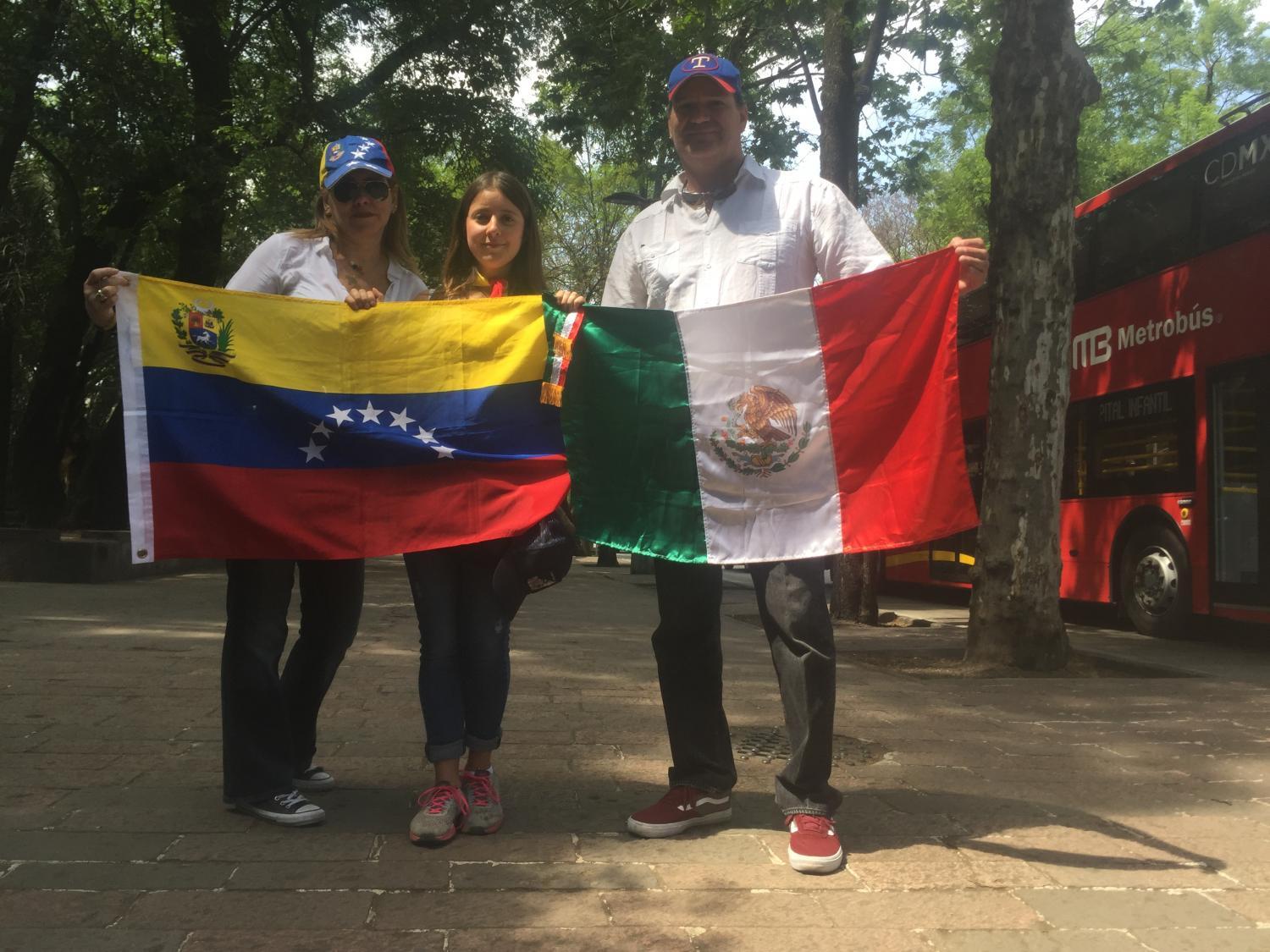 Hundreds have gathered on several occasions in Mexico City to support Guaidó and ask for Mexico’s help with the food crisis.

“This is not a political issue anymore, it goes beyond that, as a human issue,” said Juan Aguilera, a Venezuelan immigrant, entrepreneur and one of the organizers of the rallies.

Aguilera thinks the humanitarian crisis is the priority, but politicians focus more on taking stances.

“I think Andrés Manuel López Obrador was elected as many saw him as a human rights defender, and I hope he breaks his silent alliance with Maduro, the tyrant appropriator,” Aguilera said.

But for Aguilera, at the end of the day, it’s the people, and not the governments, who make the difference. 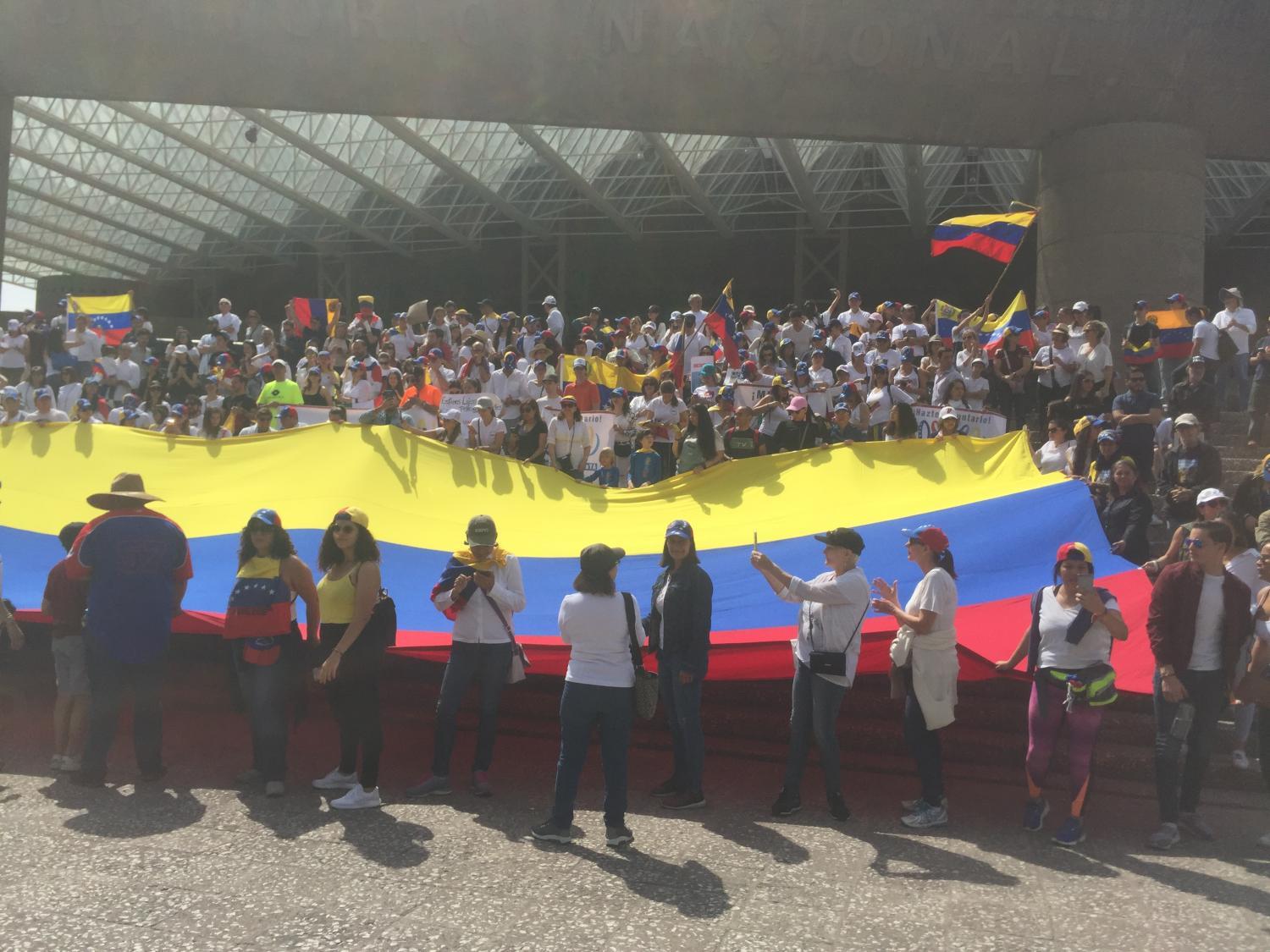 Rodrigo Cervantes/KJZZ
Rally in Reforma Avenue, in Mexico City, against the Maduro regime in Venezuela. 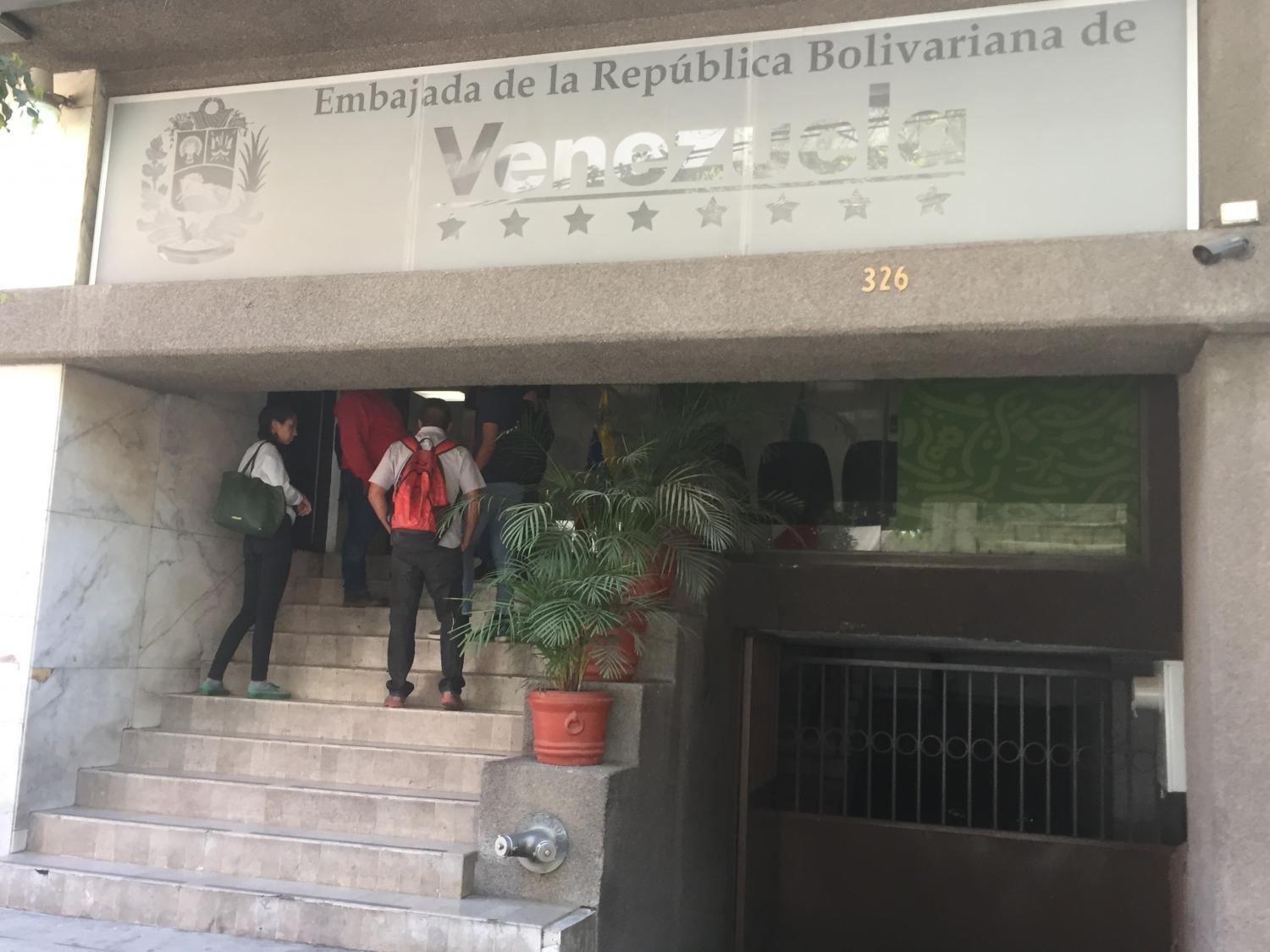 Rodrigo Cervantes/KJZZ
The Venezuelan embassy in Polanco, an upscale neighborhood in Mexico City.