As Hermosillo, Sonora, Grows At The Edges, Some See A Future In The Center 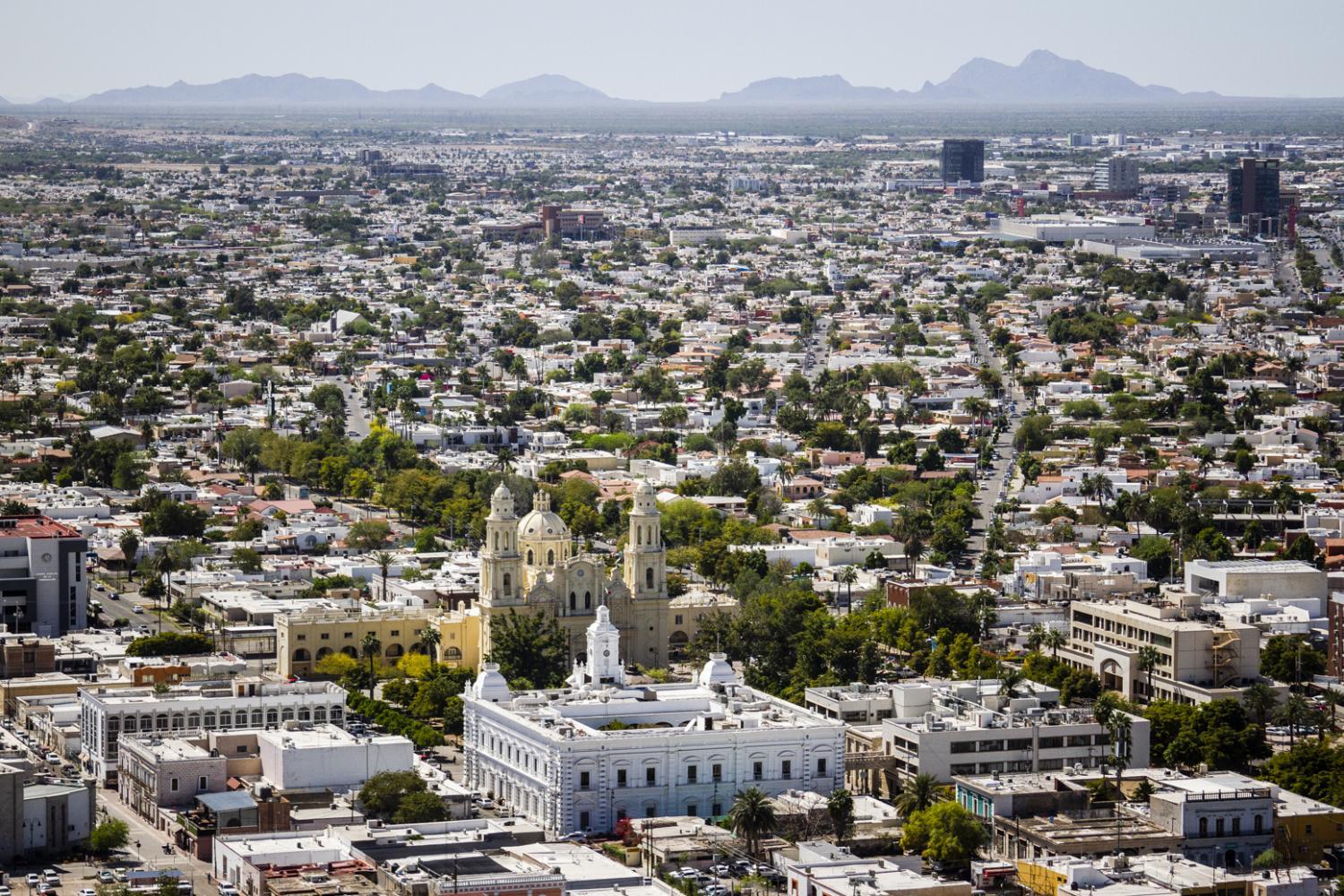 Murphy Woodhouse/KJZZ
Hermosillo's central plaza and other parts of the city's center, as seen from the iconic Cerro de la Campana.

In a spacious house in downtown Hermosillo a few weeks back, workers were scraping and rubbing paint from the walls, getting them ready for a fresh coat.

The property is at the tail-end of a transition from a family home to a co-working space, one that will also feature a salon, rooftop common area, tree-shaded patio and other amenities.

“So we’re standing right in what’s going to be the coffee shop,” said Jim Britton, a Canadian whose family's drilling business brought him to Mexico for the first time in the early 1990s. “It’s going to be inhabited by a coffee shop called Cafe Catrin, which does in my opinion here in the city a great job of making coffee.”

After moving to Mexico more than two decades ago, Britton fell in love, started a family and eventually returned to Canada, only to have to Mexico pull him back a few years ago. Now he’s one of the backers of two major redevelopment projects along Boulevard Hidalgo that hint at a renewed interest in the Sonoran capital’s urban core.

“It’s becoming this area where you have a whole bunch of services basically under one roof, one roof being the neighborhood,” he said. “We’re hoping that it just starts building, and growing and pretty soon that this area becomes a destination.”

A stone’s throw from the house is a brand new beer garden with an expansive menu of Mexican microbrews. A bit further is a soon-to-open boutique hotel. Some of Hermosillo’s best restaurants are a short walk away, and a tree-lined pathway stretches east to Hermosillo’s charming main plaza.

Mixed in with the newer, higher-shelf spots are places like Melas, an affordable hole-in-the-wall with must-eat renditions of Sonoran culinary standards.

“It will be a zone hopefully that will be accessible to everyone in this city, and anyone who’s visiting us,” Britton said.

Like many American cities, Hermosillo’s urban footprint is experiencing dramatic growth. In less than three decades it more than doubled to roughly 70 square miles, and its rate of growth is now faster than the underlying population, according to a recent planning document.

“That obviously brings serious sustainability consequences for the city,” said Guadalupe Peñúñuri, head of the municipal planning body. “Revenues have grown much more modestly than the urban footprint.”

Outward expansion has also meant greater car dependency, and a hollowing out of the center, according to Peñúñuri. 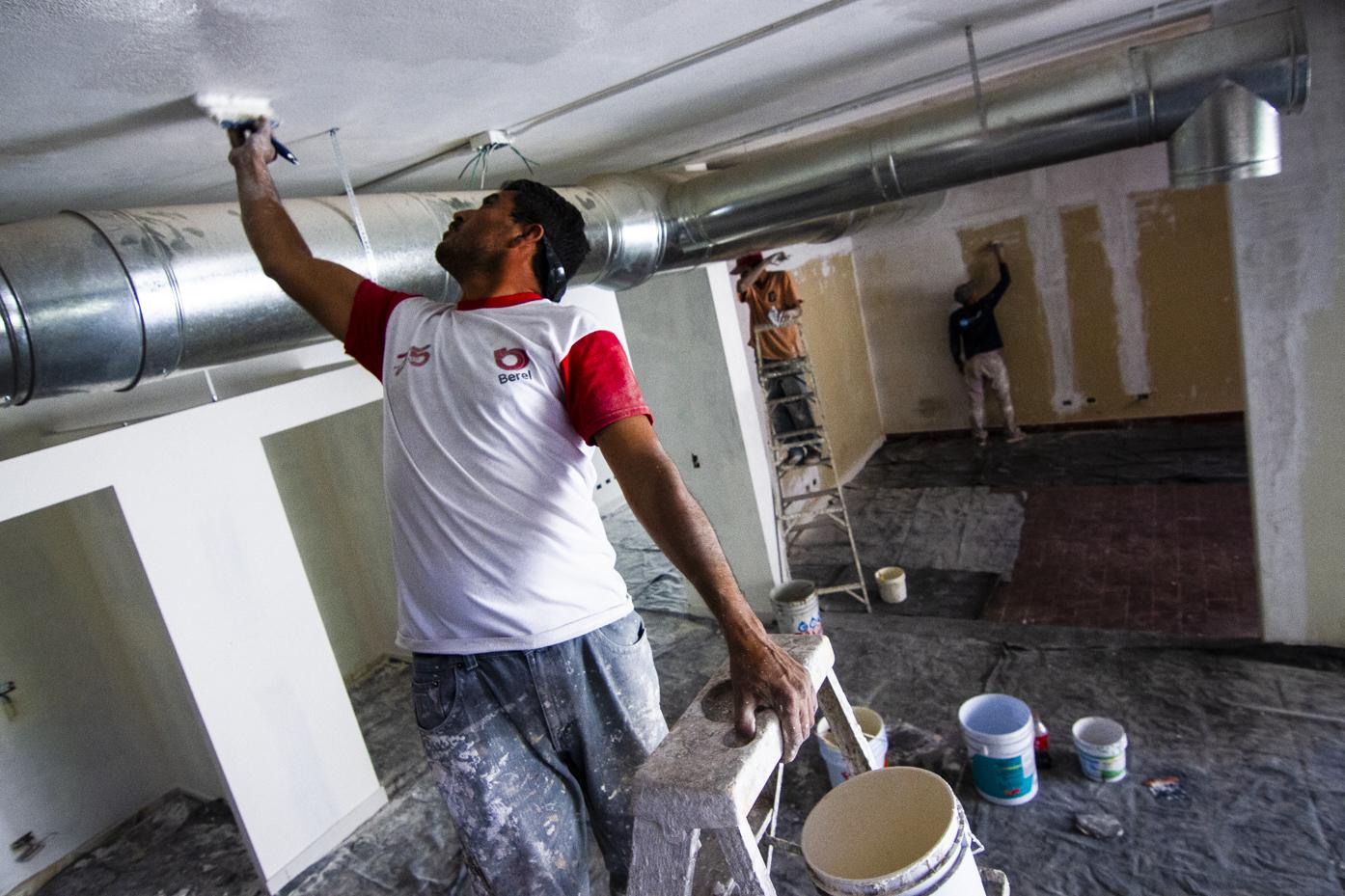 Murphy Woodhouse/KJZZ
Painters put on a new layer of paint at a large downtown Hermosillo home being converted into a coworking space.

But alternative approaches to growth — like taking advantage of existing low-density within the footprint — are gaining traction. the city recently developed a revitalization plan for a large swath of the historic city center.

“The idea is to rehabilitate the center, and come to see it as not just a place for business, but as a place to live, a place to work, a place for innovation and creativity,” she said.

There’s talk of a student housing complex, and a senior living center. Also on the table are incentives for developers, more flexible zoning, investment in public spaces and the promotion of non-motorized transportation, according to Peñúñuri and a municipal planning document.

While the city works on implementing its plan, other private projects are forging ahead. Perhaps the best known is Parque La Ruina, a food truck hub and music venue, among other things.

Its name — the Ruin — comes from the long abandoned textile factory that used to occupy part of the expansive property.

Jose Luis Deschamps, one of the park’s young founders, was there getting dinner on a recent weekday evening. A wireless buzzer told him his regular taco caramelo and a light version of the same thing were ready. 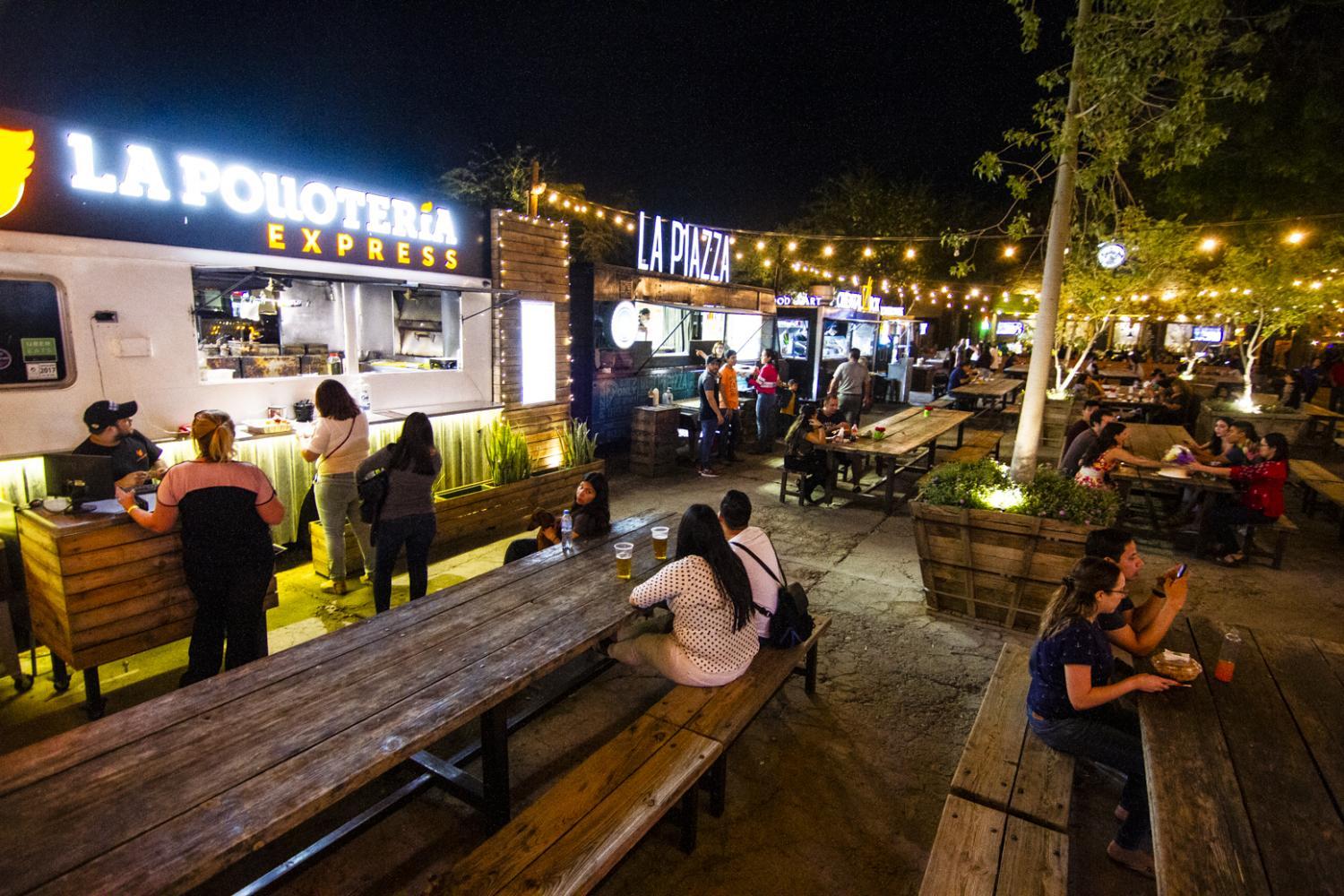 “What we’re trying to do is build our own city,” he said. “Like build the city in which we would like to live.”

And for Deschamps, that means a city with a denser core, where getting together for food, fun or business doesn’t mean a long drive through Hermosillo traffic. The success of La Ruina has sparked other developments in a previously overlooked area near the city center.

“People (are) looking for … this kind of places,” Deschamps said. “There should be more places like this. I mean, different kinds, but if you build these places and the city around it, it gets people to live better.”

At Plaza Londres, Britton’s other project on Boulevard Hidalgo, cafe customers are working and chatting in the outdoor seating area. The stately mansion now features several shops, a small crepe restaurant and spaces for yoga and meditation classes. Several ASU students and staff are slated to be the first guests in the second-story Airbnb units. 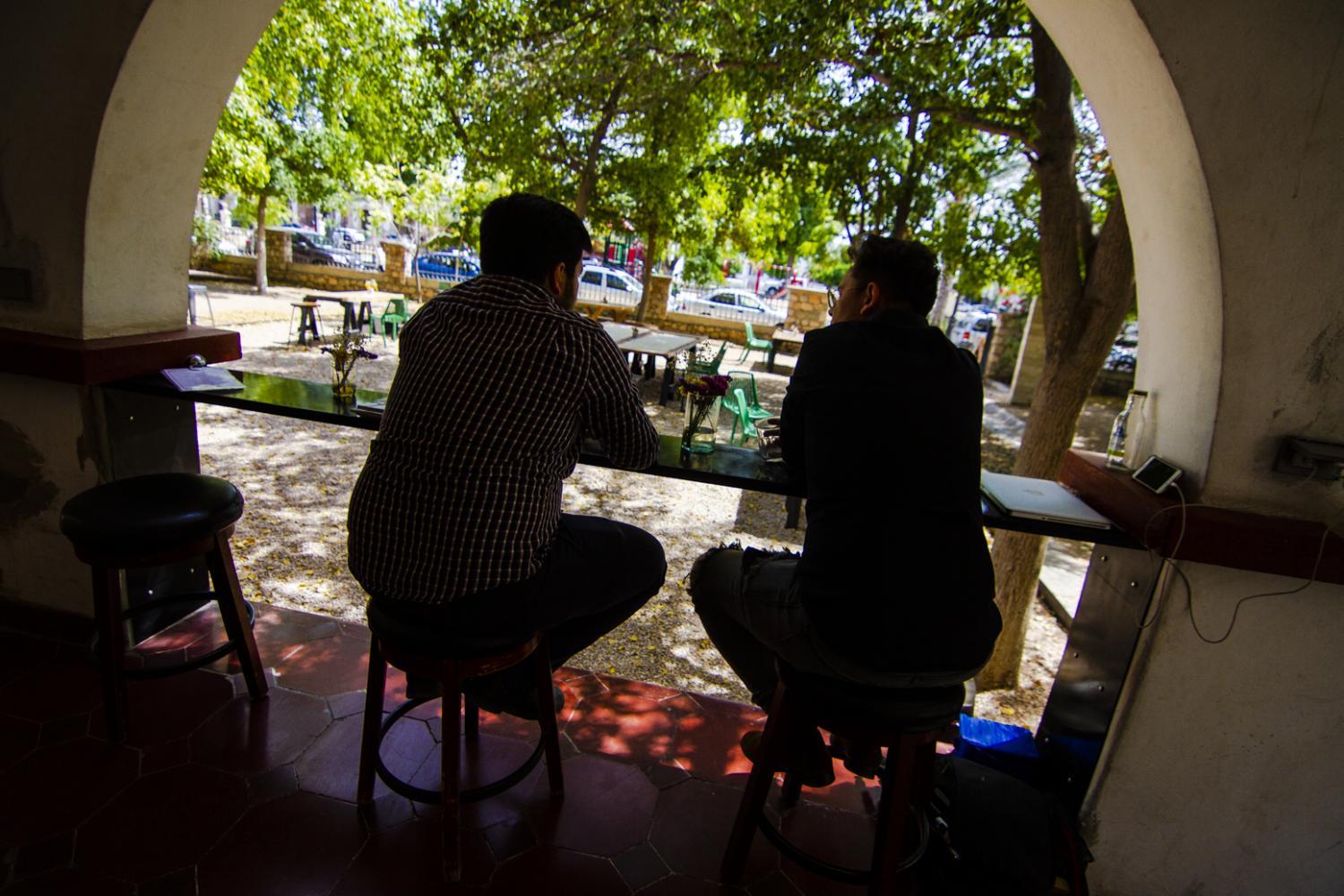 “I think there’s been a resurgence of young people, kids our age, from 18 to 30 years old, where we’re looking for more places like this in the center,” said Zaid Olivarria, a freelance graphic designer.

But the new shops, cafes and restaurants also drew Jonathon Bell, owner of Dynapro, a mine pump manufacturer that will be based at Britton’s coworking space. Having legal and accounting businesses they work with nearby was also a plus.

He added that he and his employees are able to walk everywhere they need to go. They even from time to time hold what he calls “walking meetings.”

“It’s just nice walking around the center of Hermosillo,” he said. “It’s a really nice area.” 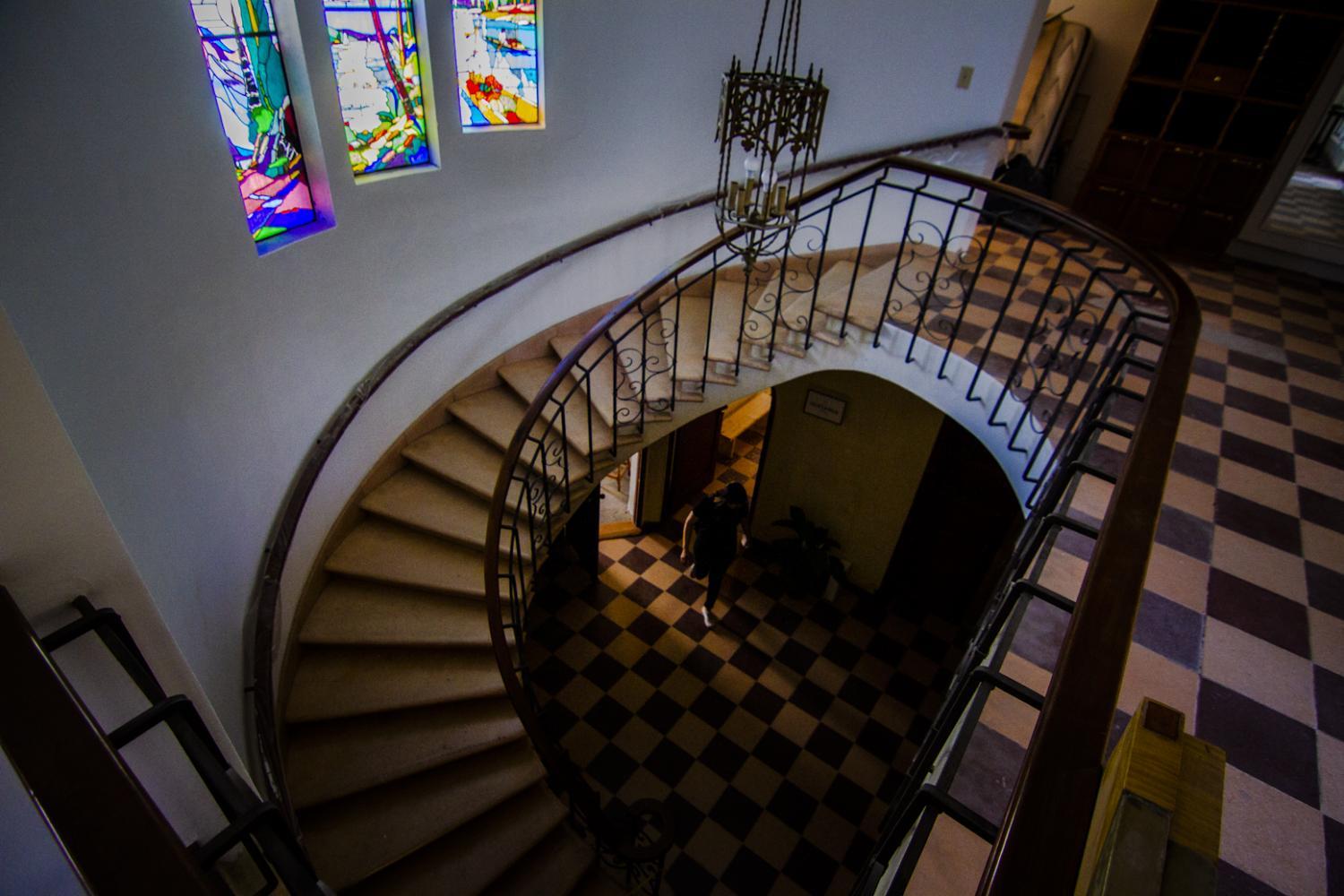 Murphy Woodhouse/KJZZ
A worker walks back out to the courtyard seating area at Plaza Londres.
BusinessFronteras Sonora