Even In Arid West, Federal Rule Change For Waterways Matters 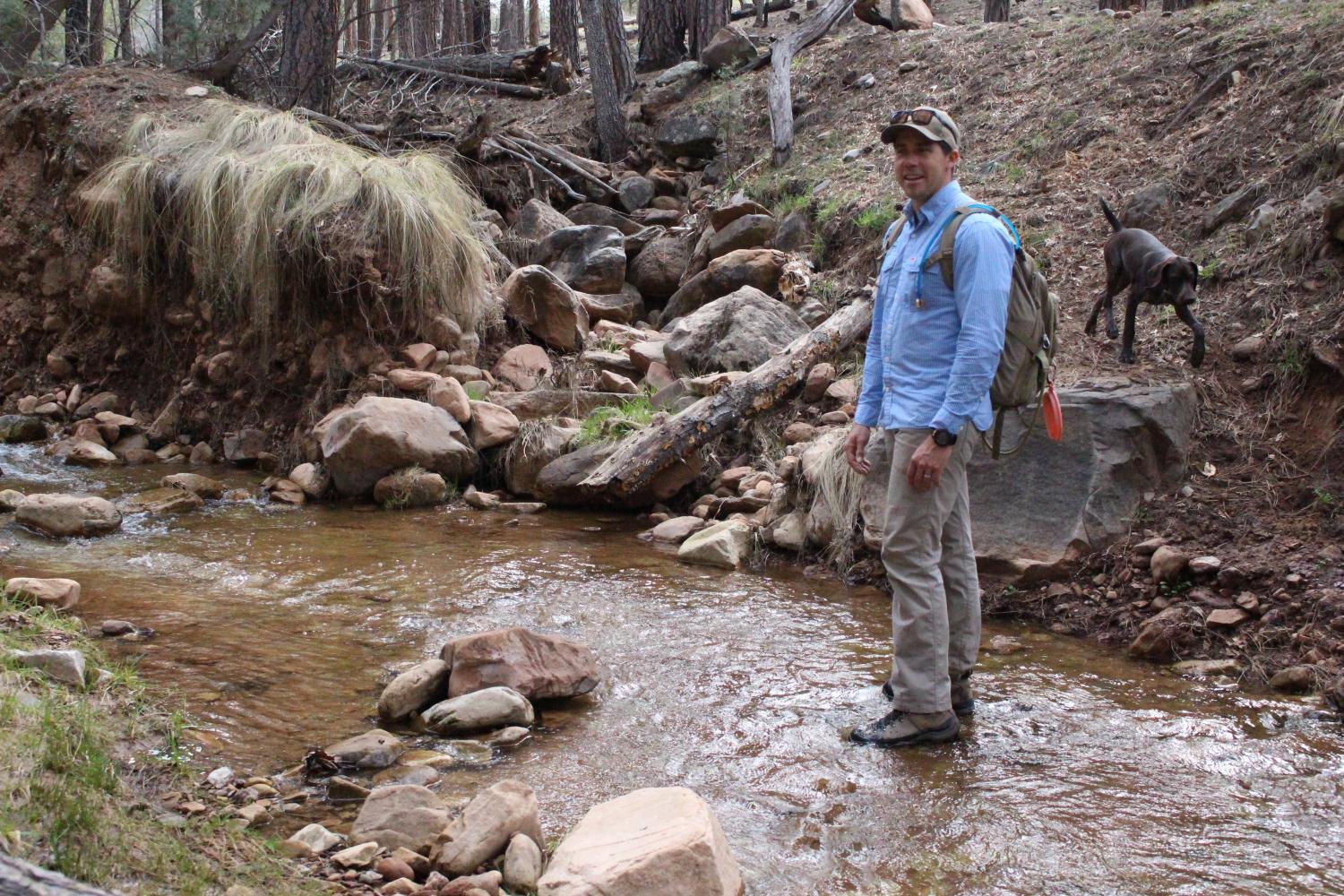 Bret Jaspers/KJZZ
Nathan Rees of Trout Unlimited standing in Dude Creek in the Tonto National Forest. The dry waterway (at center) likely flows into the main creek during heavy rain.

Nathan Rees and his German shorthaired pointer, Beau, took this reporter off-trail to hike along Dude Creek in Tonto National Forest, northeast of Phoenix. I asked Rees to show me an ephemeral stream: a channel that may be dry now, but clearly carries water at least once in a while.

“[It’s] probably not mapped [because of] how small it is,” Rees said as Beau ran up and down the banks of Dude Creek. “But this contributes to Dude Creek that we’re standing in right now that has water in it.”

Rees works for the Arizona chapter of Trout Unlimited (TU), the sportsman's group. It favors federal protection over ephemeral streams, so industries would need a certain federal permit to build around it or discharge anything into it.

According to TU, three-quarters of Arizona’s streams are “ephemeral,” which in legal terms means waterways that flow in response to precipitation.

“If there was a mining operation even a mile upstream from where the confluence is, and tailings are being dumped into this, you know, dry washbed, when those heavy rains come, it’s gonna push all those tailings downstream,” he warned. “It’s gonna get pushed out into Dude Creek, which is going to go into the East Verde, into the Verde, into the Salt, down to the Phoenix Valley."

Big Arizona waterways like the Salt River fall under the federal Clean Water Act, as do some of their tributaries. But exactly which tributaries are covered by the CWA has led to many legal fights since the law first passed in 1972.

Earlier this year, the Environmental Protection Agency (EPA) and the Army Corps of Engineers said ephemeral streams would not fall under federal jurisdiction under the Clean Water Act. It was a change from rules finalized by those same agencies in 2015, under the Obama administration.

“The hook is, ‘Waters of the United States.’ Those are the jurisdictional waters,” said Bethany Sullivan, a law professor at the University of Arizona. “Well, what does that mean? That definition has evolved tremendously over time.”

Bret Jaspers/KJZZ
The reverse angle of the dry wash that empties into Dude Creek.

Sullivan said the Clean Water Act has a long and complicated history. The Obama rules came after a Supreme Court case from 2006 left no clear directive, giving each side of the issue a legal argument to make. After studying the issue, the Obama-era EPA and Army Corps of Engineers went with what Justice Anthony Kennedy wrote.

“The idea that waters that have a ‘significant nexus’ with traditionally navigable waters should fall within the scope of the act,” Sullivan said.

One example would be a wetland or desert wash whose hydrology significantly affected a more permanent waterway, even if the surface water in those wetlands or washes did not physically touch the main waterway.

The rule was unpopular with mining and development companies.

Adam Hawkins, who consults for mining companies with the firm Global External Relations, said the 2015 rule would have only added “additional, unnecessary time and analysis to the process with, in my opinion, no additional protection to the environment” because other environmental laws are also in effect.

The Trump EPA and Army Corps of Engineers are using a different, narrower definition of Waters of the U.S., this one from Justice Antonin Scalia. Ephemeral streams would not be covered under the current proposal.

Spencer Kamps, with the Home Builders Associations of Central Arizona, is happy with the revision.

“The purpose and goal of the Clean Water Act (CWA) was to protect water,” he said. “If water doesn’t remain there, [what] is the need for a federal footprint to regulate that system?”

Getting a federal permit under the Clean Water Act, Kamps said, can cost hundreds of thousands of dollars in engineering and legal services. And he added that having less federal oversight does not mean no oversight. In other words, the state can step in.

After early signs the Trump administration would change the rule, Arizona Gov. Doug Ducey wrote to the EPA and said the state would have to “evaluate how to protect waters that no longer fall under the Clean Water Act.”

The state is still finishing its comments on the proposed change, and the Department of Environmental Quality declined an interview.

"It’s a rollback of fundamental principles that have been on the books, in place, enforced, implemented since 1972."
— Theodore Roosevelt Conservation Partnership attorney

Melinda Kassen, an attorney with the Theodore Roosevelt Conservation Partnership, a sportsman group out of Colorado, does not see states filling the breach left by the federal government. She argued state Legislatures will be reluctant to pass any fee increases needed to improve regulation.

Kassen also sees the Trump EPA going further than a rollback of Obama administration rules in saying interstate waters — those that flow in two or more states — are not automatically considered under federal jurisdiction.

“It’s a rollback of fundamental principles that have been on the books, in place, enforced, implemented since 1972,” she said.