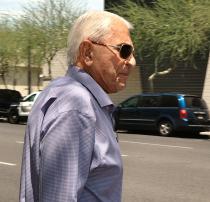 The town of Queen Creek is negotiating with an interim manager of troubled water utility Johnson Utilities to prepare for increasing water demands from customers this summer.

The Arizona Corporation Commission appointed EPCOR as the interim manager for Johnson Utilities in July of 2018 after customers complained of water pressure issues and multiple instances of sewer overflows in the company’s service area.

Paul Gardner is the director of utilities for the town of Queen Creek. He says the actual amount of water that will used by Johnson customers this summer is hard to anticipate because the system has so many deficiencies in the past.

“I don’t know if anybody knows what the true peak demand in the summer really is for their customer base,” Gardner said.

Garder says EPCOR has asked Queen Creek to agree to an interconnection, which would involve connecting the two systems with pipes and allow the town to sell EPCOR water.

Gardner says the town would be willing to sell between 1 and 2 million gallons of water a day to EPCOR.

While the Johnson customers are not in their service area, Gardner says the town feels an obligation to provide support for their neighbors.

“These are all what we would call non-residents,” Gardner said, “but we’re the closest municipality to them. They’re looking for relief.”

Gardner says they have asked the Corporation Commission to indemnify Queen Creek against a lawsuit from Johnson Utilities over the interconnection.

The owner of Johnson Utilities, George Johnson, stated on the company’s Facebook page that Johnson opposes the interconnection over what it calls “unanswered questions” regarding the impact to ratepayers.

EPCOR will present the proposal at a Corporation Commission meeting on April 23.