Mexico Gets Its Worst 1Q GDP In A Decade 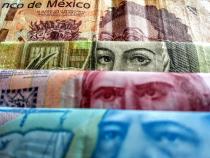 MEXICO CITY - Mexican president Andrés Manuel López Obrador says his country’s economy is looking better than ever — but numbers show the opposite. The country's economic activity registered its biggest fall for starting a year in a decade. And among the main factors: nervous foreign investors.

Mexico’s gross domestic product (GDP) shrank 0.2 during the first quarter of the year compared to the last quarter of 2018. It’s the worst start for a Mexican president since the administration of President Ernesto Zedillo in 1994, who faced one of the biggest economic crisis in Mexico.

Pedro Tello, an economic analyst in Mexico City, explained that the current deceleration started by late 2018, but grows as domestic consumption and public spending decrease.

Tello and other analysts think that layoffs in public sector and budget cuts brought from the current presidency, as well as the gas shortage crisis earlier this year, contributed to the current shrinking of the GDP.

Tello added that uncertainty felt from investors towards the current administration, and less exports, also contributed significantly to the fall. Mexico has been benefited by the current stability of the U.S. economy and the dynamic trade among both nations, but actions such as the unexpected and unjustified cancellation of the new airport in Mexico City send the wrong signals, the economist explained.

López Obrador says he expect a GDP growth of 4 percent by the end of his term in six years. But for Tello, the president needs to bring certainty to the markets and strengthen Mexico’s productivity; otherwise, the economy will stagnate on its current drop with an eventual recession.

Analysts and rating agencies warn that the lack of growth in the Mexican economy could also translate into job losses, lower incomes, inflation and less investments.