How Will School Funding Measures Fare In An Off-Year Election? 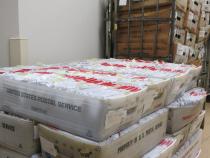 (Photo by Al Macias-KJZZ)
Stacks of early ballots from the November 2012 election at the Maricopa County Registrar's warehouse.

PHOENIX – About 30 school districts in Maricopa County are asking voters to support overrides and bonds that would subsidize school funding on Tuesday. But it's unclear how many voters will participate in this off-year election.

For many voters around the Valley, the only question being posed to them today is whether or not they support these school funding measures.

In the past, an off-year election like this one — which typically means low turnout — could have been favorable for these kinds of initiatives.

That's according to Northern Arizona University Education Professor Nic Clement. He says people who made the effort to go to the polls when the only issue on the ballot was an education override were likely to be supporters.

But Clement says vote by mail changes the landscape.

"I don't think we have enough data to do those predictions now because the mail-in option is relatively new and it changes your ability to predict how the voters are going to vote," Clement said.

He said that means school districts have to make a greater effort to do voter outreach to gain support for overrides and bonds.