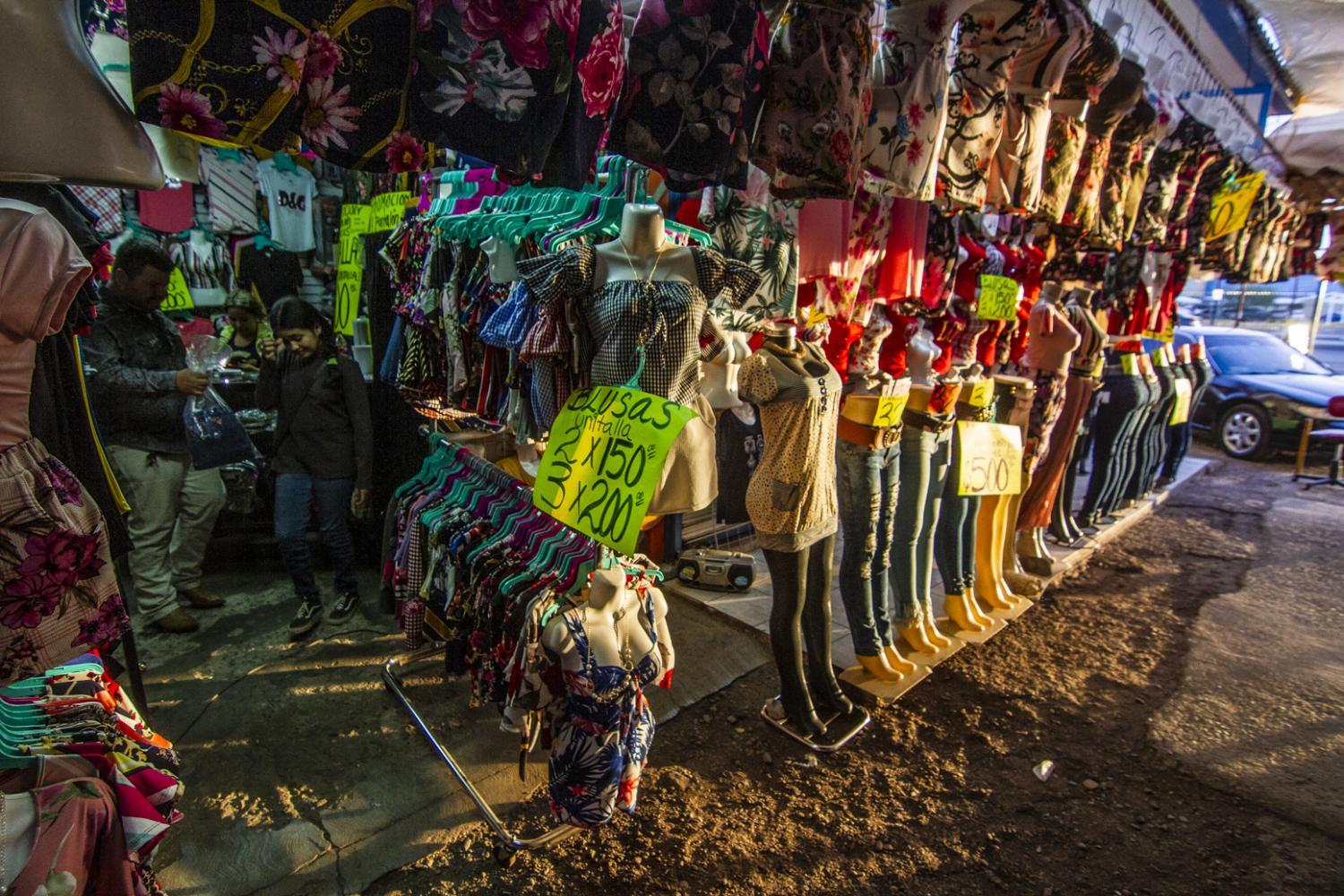 Mexico-bound pickups weighed down by unwieldy piles of tools, furniture and appliances are a common sight on Arizona’s highways. Many are headed for vast flea markets stocked with goods Americans found no longer useful. Resale is not an easy way to make a living. And profitability can depend on how much gets stuffed into a truck headed south.

Benito Encinas tried to convince a southeast Valley man holding a yard sale to knock a couple bucks off the price of an air hose, but the owner refused.

The father of three from Hermosillo was in Queen Creek looking for tools, which he said are in high demand back home.

“They’re always looking for tools in Mexico,” he said in Spanish.

Then Encinas spied a mechanic’s set of metal auto ramps, and tried again.

Sometimes owners will bargain. But this one wouldn’t budge. So Encinas agreed to the sticker price, pulled out $20, and the man gave him change. 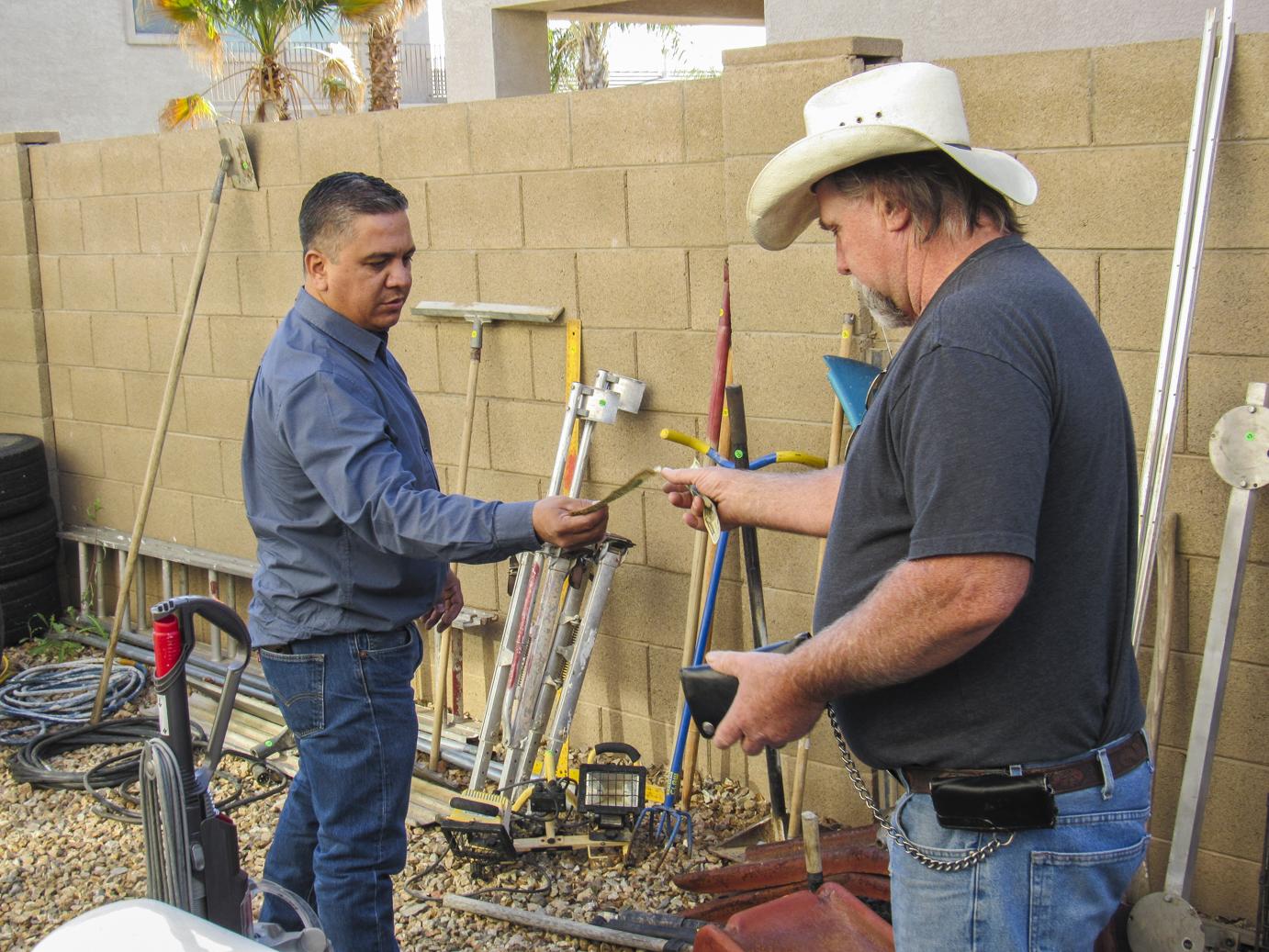 Matthew Casey/KJZZ
Benito Encinas (left) pays cash to a yard-sale owner for a mechanic’s pair of metal auto ramps. Tools were at the top Encinas’ shopping list on a recent business trip from Hermosillo to the southeast Valley.

Reselling the ramps in Mexico helps Encinas take care of his family. The stop at one of many yard sales he trolled on a recent Friday was part of a regular trip to the United States made more expensive by a weak peso. Encinas couldn’t spend too much time trying to wheel and deal because a small army of competitors might have bought everything up at other yard sales.

But if things go right, Encinas said he won’t have to worry about getting back the $2,000 a business trip can cost.

Encinas drives everything he finds in Arizona back to Mexico in a white Ford pickup. He’s built a tall black metal cage into the bed with doors on the tailgate. The vehicle has been armed with a sensitive alarm system because the last one Encinas had was stolen.

Packing the pickup is a delicate art, which Encinas demonstrated after buying a dining room set. First he wedged the long wooden table into the bed between luggage and a gas grill. Then he stacked and strapped six upholstered chairs to a high platform that extends forward from the cage and over the cab.

A full cage and seasonal weather sometimes forces Encinas to drive slower on the more than 300-mile trip back to Hermosillo.

“This time of year is really windy, and it moves the car around a lot,” he said. On a recent weekend, the Hector Espino Tianguis — or flea market — is bustling. With well over 400 stands, it looks like every yard sale in Phoenix condensed into the same three or four square blocks.

You can find pretty much anything there and — if not a kitchen sink — certainly the tools and parts to fix one. Marina Martinez and her young daughter, Mariana, were there on a very specific shopping mission.

“We came to find things for her because she’s playing baseball,” Martinez said. “Here you find brand names, and cheaper. (In the United States), people sell things that are practically new, not as used as things you can buy here.”

Upwards of 90 percent of the goods on sale come from Arizona, one of the tianguis’s managers said.

Melissa Guathier, an assistant anthropology professor at the University of Victoria in British Columbia, has done a lot of field work in Mexican border tianguis.

“(Shoppers) will tell you it’s much better than the clothing produced or made in Mexico,” she said. “People would rather buy a Tommy Hilfiger polo shirt for 25 pesos knowing that they’re going to be able to wash it several times.”

For the border’s many poor residents, tianguis aren’t just a cheap place to shop, she says. They’re also a relatively easy-to-enter market for people looking to earn income. 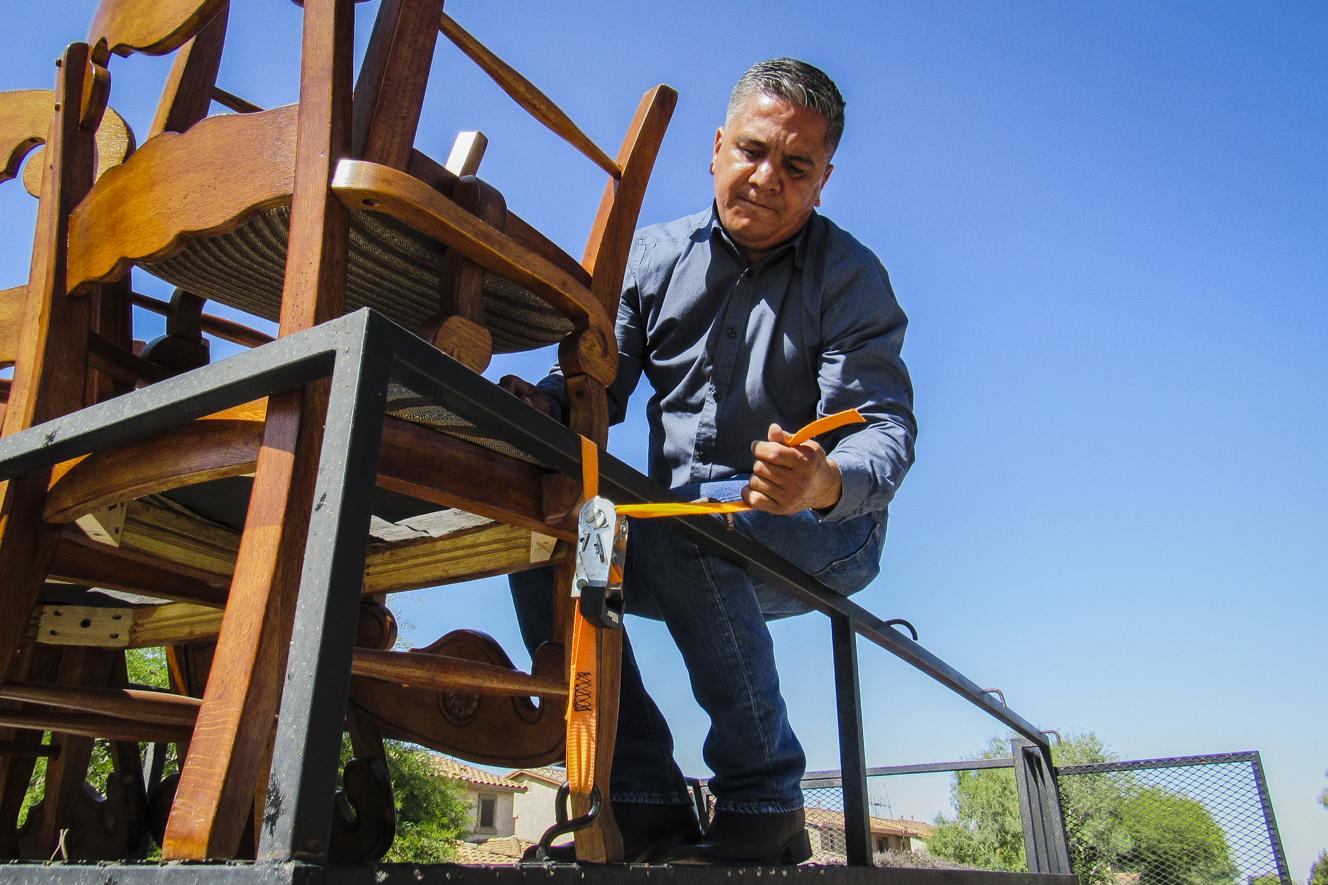 Matthew Casey/KJZZ
Benito Encinas straps a half-dozen upholstered chairs to a platform that extends over the cab of his white Ford pickup.

Tianguis aren’t minting millionaires, but a modest living can be earned if you can navigate the business’ many challenges, vendors say.

With low margins, volume is key. On a recent Sunday evening, Encina’s truck was packed tight and stacked two-people high in front of the tianguis after returning from Phoenix. It was a master class in spatial relations.

His teenage son, Emilio, was working chairs, bikes and ladders loose from the top in a careful balancing act.

“This is more or less average for what he brings,” he said. “Sometimes he brings more, sometimes less, but it’s always the same: whatever fits in the car.”

Encinas says there’s still money to be made in the business, but he’s had to adapt. That’s meant growing to two stands to allow for more stock, and looking for things like tools that pack value into small spaces. But what’s always important is a full load.

“If you come back half full, it doesn’t pay,” he said. “You have to bring a lot of things, get them cheap, and bargain a lot.” 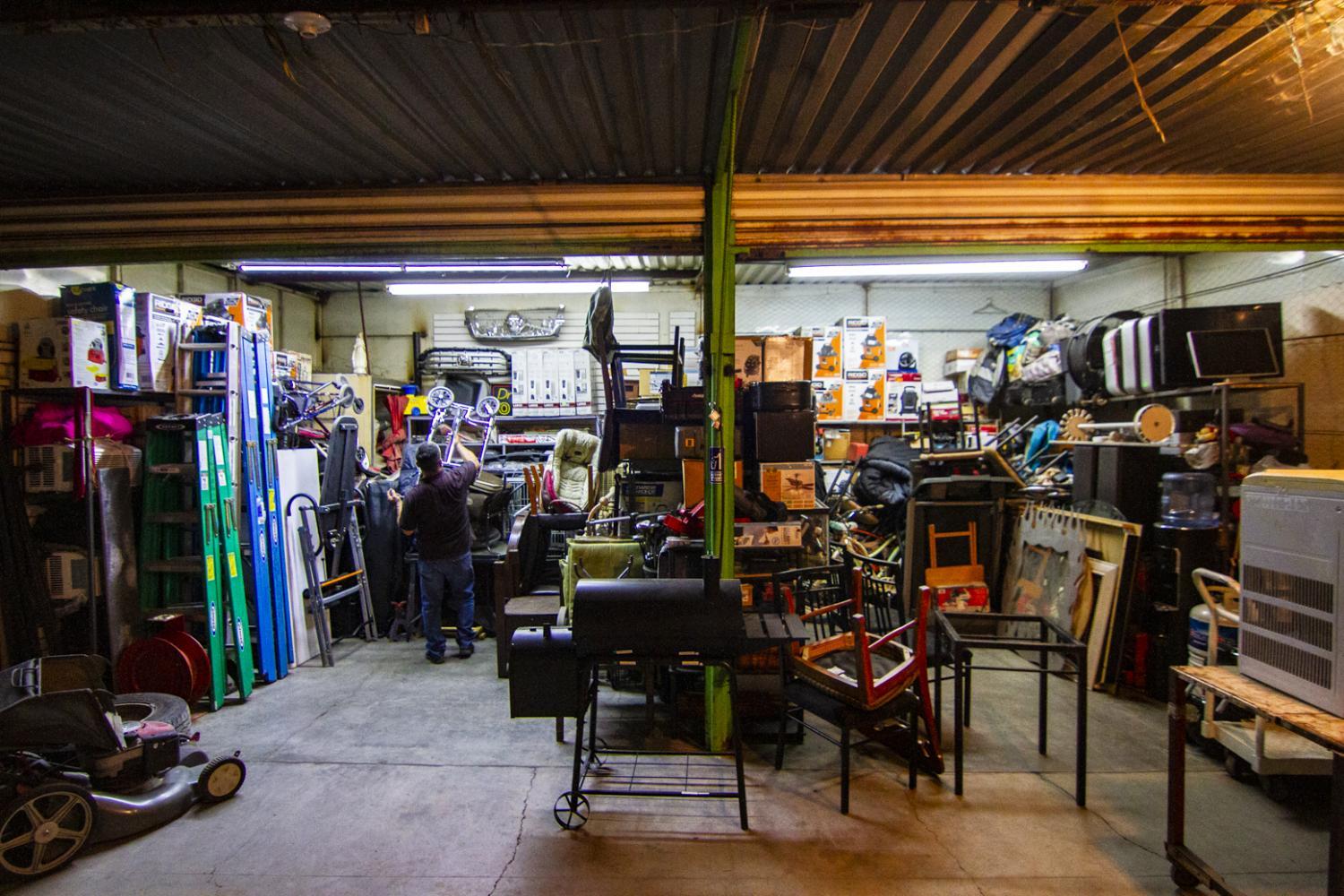 Murphy Woodhouse/KJZZ
On a recent Sunday evening, Benito Encinas fills up one of his Tianguis stands with a fresh batch of used Arizona goods that he picked up at Phoenix-area yard sales. 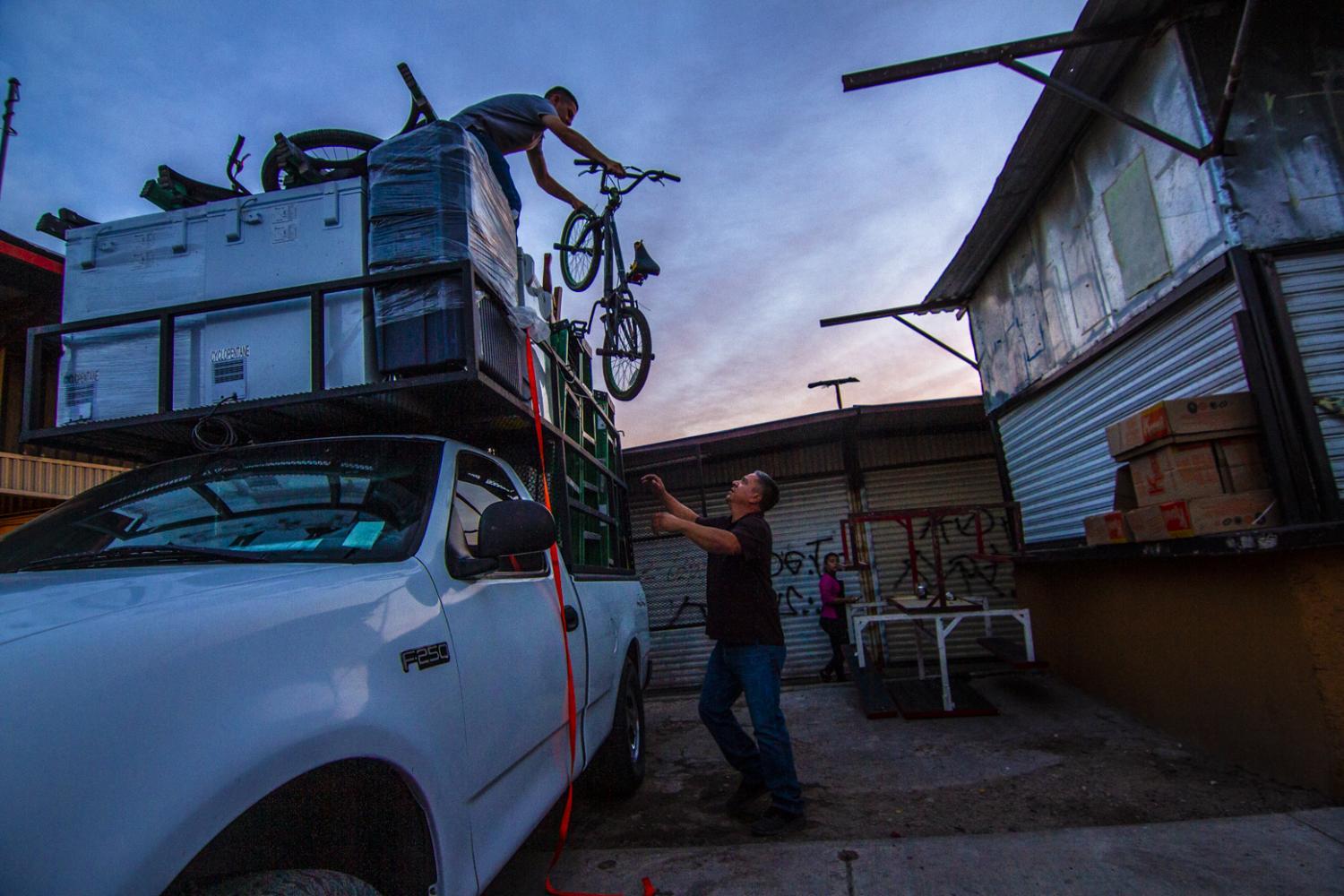 Murphy Woodhouse/KJZZ
Benito Encinas' teenage son Emilio hands him a bicycle from the top of a load of used Arizona goods that he brought back to the Hector Espino Tianguis in May 2019.

Murphy Woodhouse/KJZZ
Benito Encinas' teenage son Emilio hands him a bicycle from the top of a load of used Arizona goods that he brought back to the Hector Espino Tianguis in May 2019.