From Both Sides of US-Mexico Border, An Attempt To Stop Trump’s Tariffs 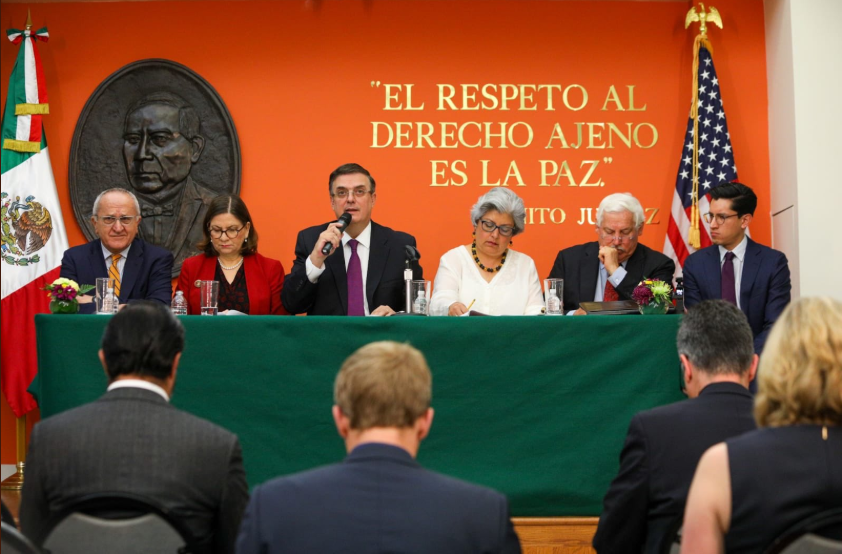 Top Mexican officials are in Washington this week, meeting with American counterparts and think tanks, in an effort to prevent President Donald Trump from carrying out a threat to impose tariffs on Mexican imports as a means to stop migrants crossing the southern border.

Three members of the Mexican cabinet — led by Foreign Relations Secretary Marcelo Ebrard – arrived in Washington over the weekend in the hopes of communicating two key points to Trump’s surrogates: Mexico has already been deporting an unprecedented number of migrants, and tariffs would harm both countries’ economies.

A spokesman for the Mexican delegation said they’re scheduled to meet with Vice President Mike Pence and State Secretary Mike Pompeo on Wednesday, and with House Majority Leader on Tuesday afternoon.

“Slapping tariffs could have a counterproductive effect,” said Martha Bárcena, Mexico’s ambassador to the U.S. “Tariffs could cause financial and economic instability, which means that Mexico could reduce its capacity to address migration flows and to offer alternatives to the new migrants who have recently arrived in México.”

"Slapping tariffs could have a counterproductive effect."
— Martha Bárcena, Mexico’s ambassador to the U.S.

Since December, Mexican immigration officials have deported more than 80,000 migrants, virtually all of whom were attempting to reach the U.S., and the country has received almost 25,000 applications for humanitarian visas during that period, Bárcena said. Without Mexico’s efforts, as many as 250,000 migrants could arrive at the U.S. border, she said.

Trump on Tuesday said he plans to impose tariffs on all imported goods beginning Monday, initially at 5% and rising to as high as 25%. Many members of congress and business organizations, including the U.S. Chamber of Commerce, say they fear how this will affect the economy.

A 5% tariff would represent more than $17 billion charged to businesses and consumers in the U.S., based on last year’s imports. The mere threat is problematic because it makes it difficult to plan imports, said Guillermo Valencia, president of Valencia International, a customs brokerage firm in Nogales, Arizona.

Importers have only recently gotten used to the new rules outlined in the preliminarily agreed-upon U.S.-Mexico-Canada trade agreement, so Trump at once re-negotiating trade and immigration policy is confusing, Valencia said.

“One thing's an immigration issue and one thing is commercial trade,” Valencia said. “Why should the people who are dealing with international traffic, people on the border mainly, bear the burden for failed immigration policies?"

Some 90,000 jobs in Arizona depend on trade with Mexico, according to a study by the Wilson Center’s Mexico Institute, a Washington-based think tank. The potential tariffs could threaten at least $450 million worth of state imports, according to the U.S. Chamber of Commerce.

Sen. Chuck Grassley, an Iowa Republican and chair of the Finance Committee, said Tuesday that the tariffs make congressional approval of the USMCA “more difficult.” Democratic Congressman Greg Stanton, who as mayor of Phoenix advocated for increased trade with Mexico, called the tariffs “self-defeating.”

“I'm going to consistently use my voice to make it clear that this is bad national policy but particularly bad policy for a border state like Arizona,” Stanton said.